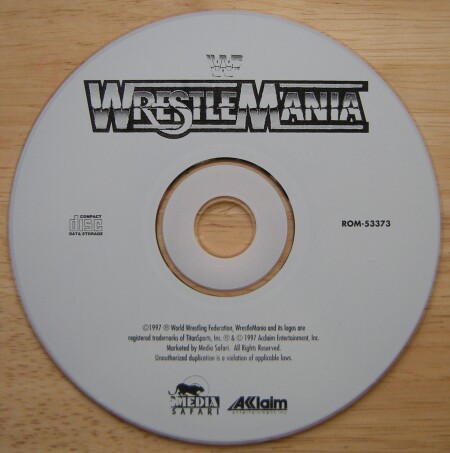 The Game
WWF WrestleMania lets you take your superstar of choice out for either the Intercontinental belt or the top belt in the WWF, the Heavyweight title. What you get is a wrestling game like no other, one that plays more like 90s staples Mortal Kombat or NBA Jam than the standard wrestling formula, and one that is built around hammering on the buttons as fast as possible.

Instead of trying to wear your opponent down and pin them for a three count, WWF WrestleMania: The Arcade Game treats that as a mere formality and instantly awards you the pin as long as the opponent doesn't have his special meter full. There are combos, special moves, and special grab maneuvers that vaguely resemble actual wrestling moves. As a wrestling game, it's mediocre. As a fighting game, it's not especially great either, but that's sports entertainment for you.

There's just something innately unsatisfying about getting mauled and losing a match in 20 seconds then having to wait over twice as long just to repeat the process. Your only real solution to the problem is not to lose, which isn't always realistic. The gimmick, or the hook, is the use of digitized images. This way, the wrestlers look precisely like their real-life counterparts. The animation is good, though the wrestlers now emit objects when they're hit. These objects fit in with the wrestler's theme: Yokozuna shoots hams out of every orifice when he gets belted, tombstones fall out of the Undertaker, and so forth.

The wrestlers all have a hard attack which involves them pulling out a foreign object from thin air and belting someone shortly before the weapon vanishes again. Incongruity seems to be the game's major theme, visually speaking. On the bright side, you get a good-looking environment to battle in with a crowd that reacts to flashier hits by firing off hundreds of camera flashes. 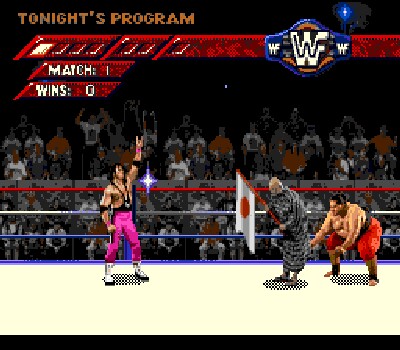 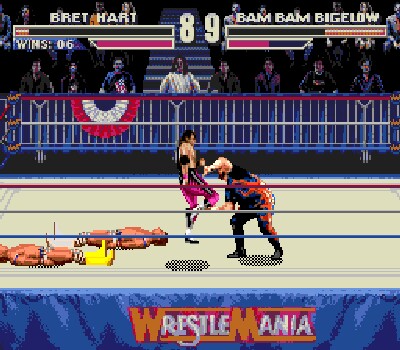