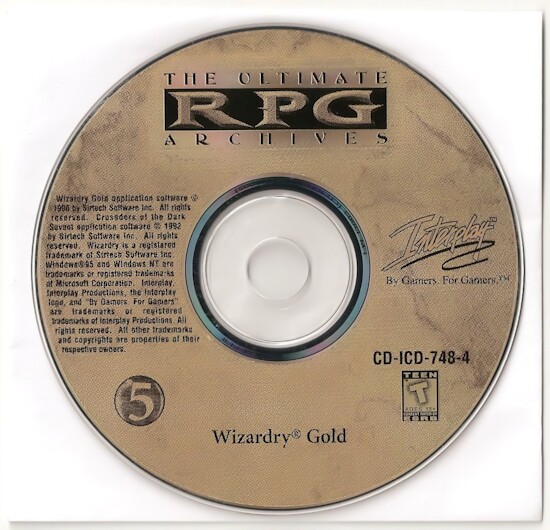 Wizardry Gold is a recreation of the critically acclaimed Wizardry VII, Crusaders of the Dark Savant. The primary differences in this incarnation are the markedly improved graphics and enhanced sound score. In Gold, you control a group of adventurers that embark on a mission to find the Astral Dominae and guard it against the Dark Savant, an evil overlord who needs the Dominae for supreme rulership. The game uses four directional step-by-step movement and combines the use of keyboard and mouse commands. The graphics and sound are decent for the time of release (1996), and the gameplay (completely intact from the Wizardry VII) is enough keep you glued to the computer for hours on end.

Wizardry is set in the world of Guardia. On the planet there is an object called the Astral Dominae, which is purported to contain power to control the universe. Of, course, there’s someone who wants this power, a fellow known only as the Dark Savant. Judging by the sound of his name, this guy is no fluff ball. You and your party are sent to recover the Dominae before the Savant does, which means finding it first. Naturally, you are dumped off on a planet without any maps, any equipment, and you are all inexperienced as a newborn - perfect people to be sending on a mission to save the universe, eh? During your travels, you meet up with various monsters and people who help or hinder you on your quest

You create up to six characters in your party, adjust their statistics with points allocated to you, and adventure off into the world. In Wizardry Gold, the character creation is fairly detailed. You are given a random dice roll which fills your basic stats. Then you are given a random number of points which you can add to you stats in any fashion that you see fit. You choose your race and class, which are quite varied. There are your standard humans, dwarves, faeries, etc, but my favorite was the Mook. A Mook is a big, hairy guy, kinda like Chewabaca from Star Wars. The classes are similar to previous Wizardry games. After choosing you race and class, you get to add points to specific secondary skills such as sword and swimming skills, allowing further customization to your characters. Once in the game world, you characters gain experience and levels during their travels, primarily through combat. Skill points are awarded each level and you assign these to your skills as you see fit.

The world of Guardia is fairly large, consisting of various cities and dungeons below in which your characters adventure through. The landscape leaves much to be desired. On land, you are limited to traveling in sort of a maze, and you never quite get feel that you are outside - it sort of feels like you are in a dungeon with a sky above your head. There are some very tough puzzles in the game. One good thing about Wizardry Gold is that way monster encounters and placement are handled - rather than sending an army of Ratkins at you when you go up in level to increase difficulty, you are confronted by tougher monsters instead (there are over 250 monster types in the game, though they are represented by only about 60 different graphic representations). Sir-Tech struck a good balance in monster placement, and I spent as much time searching and solving puzzles as I did fighting of monsters.

Wizardry VI was a very well designed game and Wizardry Gold keeps much of the flavor that made the earlier title so popular. The graphics and sound are improved, and character creation/development remains a strong point in the title. 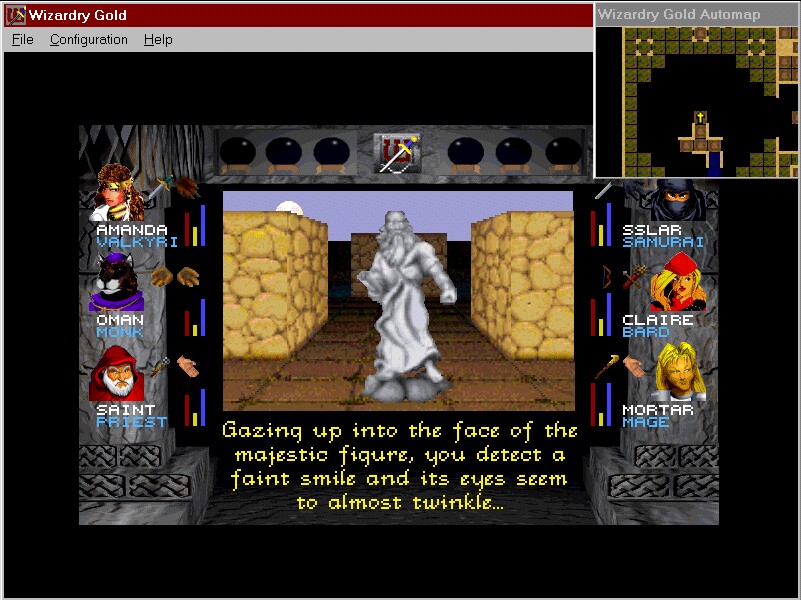