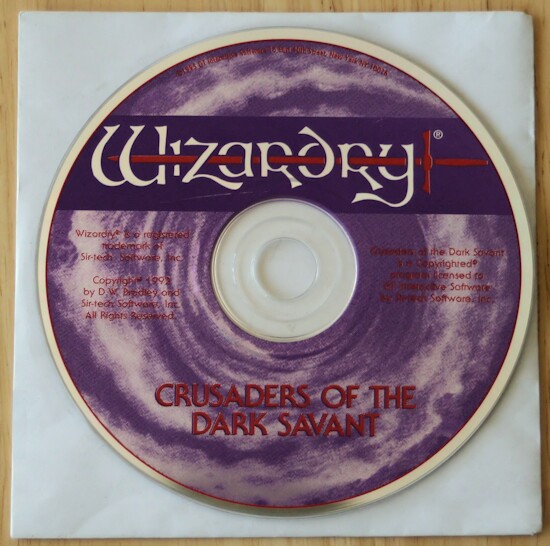 Over thirty years ago the first chapter in the infamous Wizardry series was released. Down its line-drawn 3D halls tromped we gamers, fresh from pencil-and-paper role-playing games armed with our dumapic (Great Light) and tiltowait (Nuclear Blast) spells. We bravely uncovered a host of strange puzzles, stranger treasures and their bizarre guardians. It was all so new and fresh then, and very welcome. The translation of an AD&D world to the PC was a joyous moment to gamers who cut their teeth in the world created by Gary Gygax.

What sets Savant apart is a compelling atmosphere, a sense of things wonderful and strange, throughout the game that I have not found in many other CRPGs. The story is centered around the search for the Astral Dominae, an artifact holding the secrets of Creation that was hidden centuries ago on the newly rediscovered world of Lost Guardia. As the game begins, the player's party is deposited on the planet as a representative of one of the many factions searching for the artifact. Over the course of the game your party seeks to unravel the mysteries that hide the Astral Dominae. The band must do so before their rivals, among them the mysterious and feared Dark Savant.

As the party moves through the world of Guardia, they will encounter other groups, both peaceful and otherwise. Peaceful groups can be negotiated with; success depends on the party leader's attributes and Diplomacy skill. A befriended individual can provide useful equipment or information, including rumors about the locations of maps for decoding the mystery of the Astral Dominae or of other persons the player may be looking for.

One of the most innovative and exciting features in Savant is the presence of dynamic non-player characters (NPCs). Remember -- your party is not alone in its quest for the artifact. There are a number of NPCs who move across the map, looking for the very same clues as you. It is possible to arrive at a location after a tortuous journey only to find that someone's made off with some of the spoils! The twist in Savant is that you can hunt for the NPC and the clue he bears. It is also possible to find that NPCs are hunting you! Although most NPCs will be willing to trade their clues to you peaceably, the simple fact of competition adds a real tension and urgency to the quest.

The heart of Savant is its puzzles, which range from mazes to riddles to unusual uses of items. Some puzzles are self-contained while others require items or clues from elsewhere. There is no fixed order to the first several puzzles, and even toward the very end the game virtually requires you to backtrack and retry an old puzzle with new information. Because of this I did not feel artificially constrained to a specific course of action. The puzzles are challenging, but not impossible, and discovering the solution is worth the effort!

The most intriguing aspect of Savant is also the hardest one to convey: Its atmosphere. Like some good science fiction novels, but unlike most RPGs, there is a real sense of discovery and mystery in the story. Even after my characters had advanced to the heights of power, I did not become jaded with the game; it is too full of fresh, compelling and exotic material. The world of Guardia includes a fairy with a face of gold on top of a dark mountain, a dark tower filled with mysteries and ruled by a debauched priest, a decaying town taken over by spider-creatures from the stars and much more superb imagery. There is a marvelous abundance of invention in this game, just waiting to be discovered by the player.

Savant has a number of features to enhance and simplify play. It provides automapping with the novel feature that the quality of one's map depends on the skill of the character with the map kit! The sound effects are very impressive for the time. The effects run the gamut from birds crying to wind in the trees to monsters retching after a spell of nausea has been cast upon them - - a sound that must be heard to be believed.

Cursaders of the Dark Savant was probably the best of the series. Even on its own this is an excellent game in many respects and can appeal to many diverse gaming types - whether you like hack/slash, puzzle solving, or non-player character interaction. This has all three. 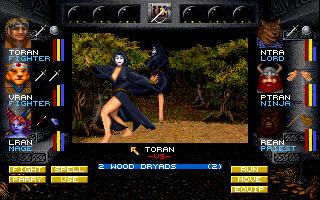 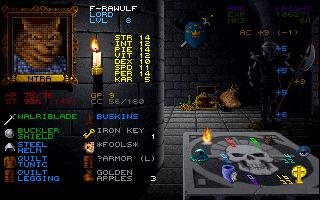