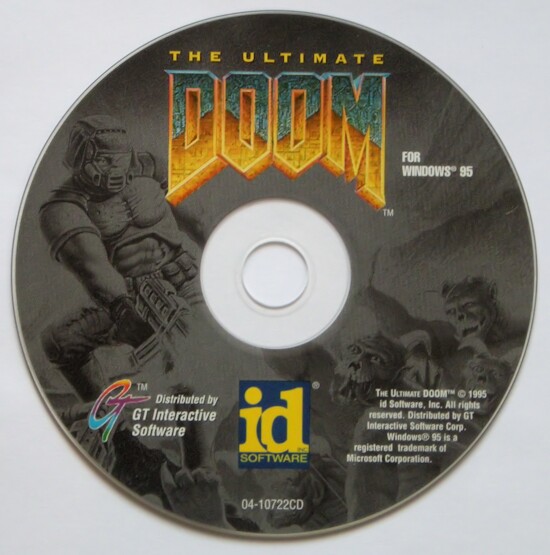 In Doom, you play a space marine, residing on Mars. For the last four years, the military has used the facilities on Phobos and Deimos (Mars' moons) to conduct secret projects, including research on inter-dimensional travel. Recently, however, military "volunteers" entering the inter- dimensional gateways have either disappeared or been stricken with a strange form of insanity. A few hours ago, you received a message from Phobos, requesting military support. "Something fraggin' evil is coming out of the inter-dimensional gateways!" they said. You are your troop are sent up to Phobos, to battle it out with whoever or whatever has come out of the gateways.

One of the most exciting things about Doom is its non-orthogonal walls. In Wolfenstein 3D, all walls were at ninety degrees to each other, and only square rooms could be created. Also, all of the ceilings in Wolfenstein 3- D were the same height from the floors. In Doom, this all changes. Doom's rooms can be of any shape and size. You can be in a huge cave, a small circular room, or even outside, in a room with no ceiling. This makes the gaming environment feel much more realistic and spacious. You feel as though you are really there, not just playing a game.

Doom was one of the first games with variable lighting, something we take for granted today. In other 3D games of the time, all rooms in the game are lit with the same intensity. In Doom, the lighting effects are parallel to real life. Walls cast shadows, and in some rooms, there is no light at all. Strobe lights are also used frequently, creating a nerve racking experience. Imagine that you are walking in the dark, and the lights only flicker on and off. One minute you are completely safe, and in the next minute you are standing face to face with a demon. When you fire your gun in Doom, the explosion lights up the room for a split second. This technique is a crude way to navigate through an area with very little light.

Texture-mapping (the process of using tiled graphics to create surfaces) is used on both the ceilings and the floors; this was a huge improvement over Wolfenstein 3D. There are acid lakes throughout the game, and if you happen to walk into them, you lose energy very quickly. Some rooms have ceilings that can fall down on top of you. Rooms with little light may force you to search for a light switch. Secret rooms filled with enemies are opened if you happen to step on a pressure-activated floor tile. Many enemies can be killed in one shot by firing at a barrel, causing a huge explosion. Stairs and floor sections that can raise and lower create more than one story on a level. Your weapon and body sways as you run, creating a more realistic walking effect. Switches can be used to open secret areas, or raise secret floor elevators. Advanced auto-mapping makes it easier to find your way around already explored sections of a level. Bonus items, such as radiation suits, temporary invisiblity, light amplification visors, and computer maps give an exciting gaming experience.

Doom combined four difficulty levels, exciting gameplay, lighting effects, graphics, music, and sound effects to the very edge of early technology. The result is a lot of fun for both the amateur and advanced gamer. Nearly two decades after its release Doom is still revered as the grandfather of the first person shooter. 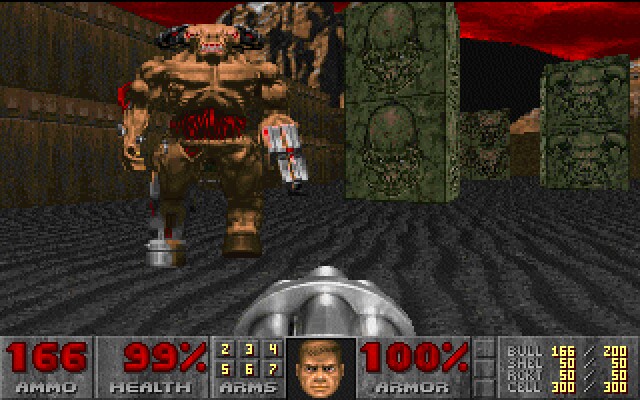 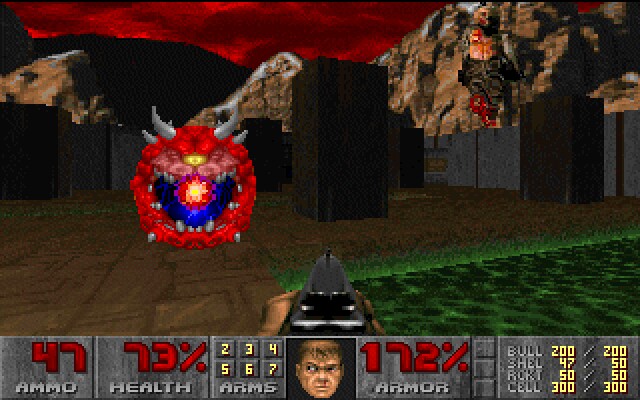