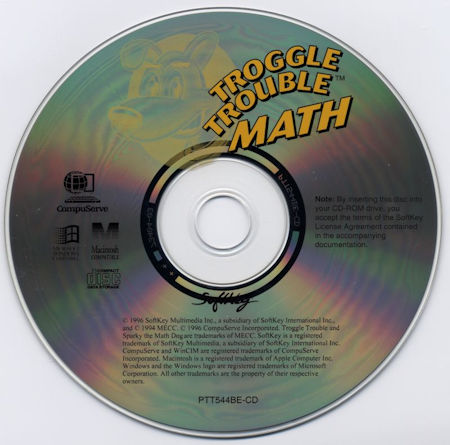 The Game
Besides The Oregon Trail, the best-loved games by the famed educational game company MECC might be the Munchers series. They were essentially the same game with different lessons swapped in. Whether the green googly-eyed Muncher was eating words, numbers, or general knowledge trivia, their shenanigans were a classroom fixture through the 80s and 90s.

The Munchers games feature a few characters, just the minimum to give the games personality and a setting. The troggles, a clan of nasty circular monsters, mostly made out of mouths, keep trying to eat the Muncher. In-between the rounds of educational matching games, you get to watch the Muncher foil the troggles’ Wile E. Coyote-style antics in parks and backyards. Super Munchers off-handedly mentions the evil Doctor Frankentroggle pulling the strings from his castle. The details mostly serve a functional purpose, but they’re enough to suggest that there’s more to the world of Munchers, and it looks like a Minnesota suburb.

MECC explored more of the unlikely Munchers universe in a spinoff game, Troggle Trouble Math. It takes the series in a very different direction, ditching the game board in favor of teaching math on a quest.

Right away, the game leaves its comfort zone: The Muncher is missing! They’ve been kidnapped by Doctor Frankentroggle’s robot henchman TROG in a plot to take over the world with mutant troggles. Enter Magenta, a resourceful scientist with an incredible hair care routine. She’s invented the Troggulator, a calculator that defeats troggles with math problems, and she wants you to use it to find TROG with help from her troggle-sniffing dog Sparky. The game’s vague about how exactly you’re working with Sparky, but basically, you’re the dog, and you hunt down clues to the Muncher’s whereabouts.

Sparky’s adventure starts in suburban Santa Bongo and leads through the Great Gobble Desert, the Muncher Mystery Cave, and into the dreaded Troggle Swamp. Once you find TROG and free him from Doctor Frankentroggle’s control, he tells you that the Muncher is “back the way you came,” back to Santa Bongo again. In multiple senses of the word, it’s a cheap twist that doubles the length of the game, and that’s fine for an educational kids game. You get double the time with Sparky and, most importantly, double the math!

Each world of Troggle Trouble Math has three hidden treasure chests, one of which holds a clue that will help Magenta figure out where to go next. (The other two contain delicious Sparky Treats.) To unlock the chests, you solve story problems. They’re usually about topics like the number of troggles doing some activity, how much troggles can eat, how far someone traveled in an hour, or things Magenta bought at the store.

Troggle Trouble Math is meant to scale for a wide age range, and depending on the player’s selected grade level, the problems get more or less complex. First-graders will add and subtract small numbers, and by seventh grade, they’ll deal with multiplication, division, and (gasp!) even fractions. Though the grades probably don’t match up exactly to how math was taught through the 90s, the smart, flexible difficulty scale ensures that kids don’t outgrow the game quickly or start it too young.

The bulk of the math is simple equations. Troggles will randomly attack Sparky while he’s looking for clues; to defeat them before they eat your Sparky Treats (which act like your health), you have to punch an equation into the Troggulator equal to the number of troggles on-screen. It teaches another side of arithmetic, but the jittery swarms of troggles refuse to stay still to be tallied up. The rest of Troggle Trouble Math is extremely forgiving, so it’s discouraging to lose the game, even when you’re successfully solving the tougher story problems, because you counted wrong.

To recharge the Troggulator’s energy, you drill quick math problems for one minute, no calculators allowed. The timer and the constant sound of the ticking clock provide just enough stakes to keep the math exciting without risking your progress. It’s brief and punchy, and MECC must have known teachers would love this section because they included it as a standalone feature on the game’s title screen.

Troggle Trouble Math manages to integrate three different types of math problems (story problems, making equations, and drills) in different places. The game has the cadence of a dungeon crawler – you explore, defeat monsters, recover, and find treasure – which creates opportunities to blend a variety of activities together. Compare the game with MECC’s earlier math titles: Circus Math from 1984 has five different math games to play, but they’re entirely separate, and they’re all close to the same thing with different animated graphics. A decade later, Troggle Trouble Math shows the developer’s growth and the benefits of a flexible narrative structure in an educational game.

80s and 90s edutainment games have been criticized as “chocolate-covered broccoli,” a slick, seemingly sweet game that’s actually homework. That’s probably true to an extent for Troggle Trouble Math too, but it’s more than a fancy disguise for a math worksheet. Troggle Trouble Math is an adventure where you interact with the world through math. It lasts about a half hour, and it has a small, animated world, just right for kids to explore while they learn multiplication. Retracing your steps halfway through the game even feels a little suspenseful.

The game expands the scope of the Munchers series, and with new characters and places come new, slightly awkward contexts for playing with numbers. 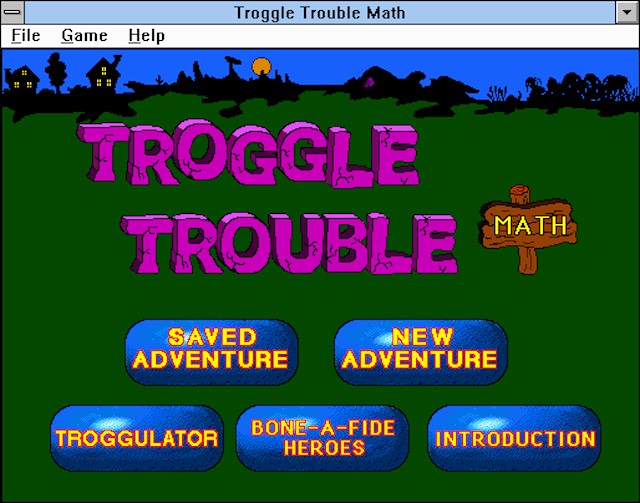 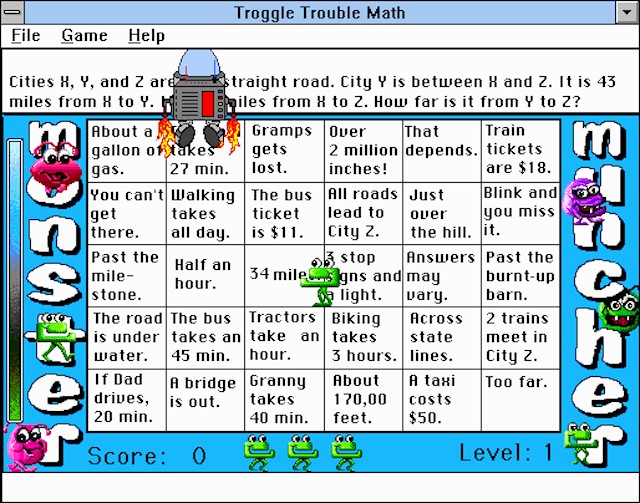 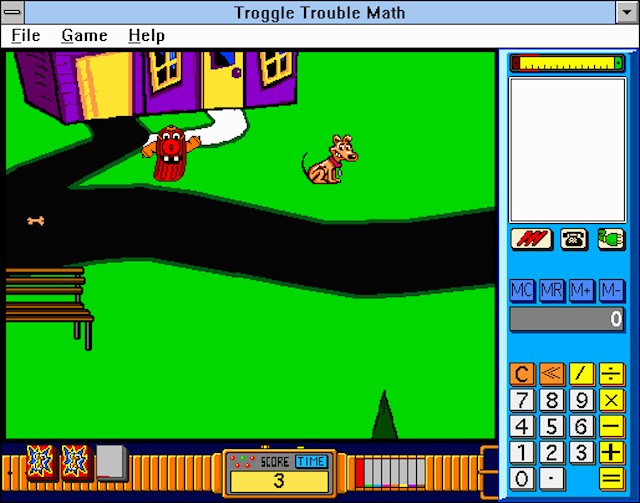 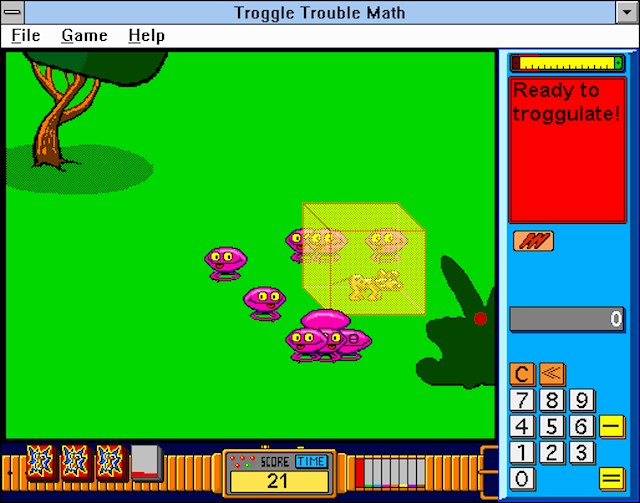