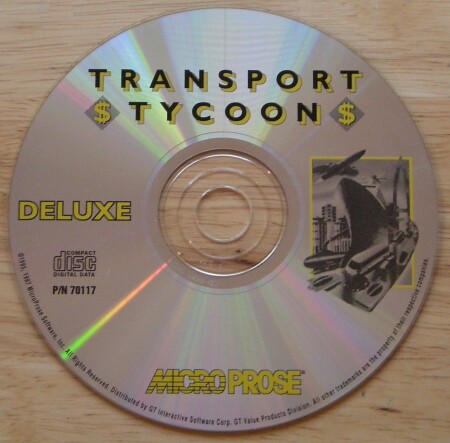 
Transport Tycoon is to the transport industry what Sim City is to town management. I suppose it is most captivating because you build an entire world without limitations regarding time or the number of missions.

Transport Tycoon is a game of exactly the same style but which, without a doubt, establishes a benchmark for this style of game. Contrary to the Sim City series, where the player must build an urban area equipped with public transportation, Transport Tycoon puts you in charge of a transportation company, involving roads, railroads, shiplines and airlines. Your role will be to transport the people between different cities and to move merchandise between production and consumer areas. The goal of the game is to manage your company for a 100 year period from 1930 until 2030 by increasing your transportation network and avoiding bankruptcy.

Considering the game was released in 1994 Transport Tycoon game offers an isometric view in three dimensions with magnificent high resolution SVGA graphics. By clicking on a vehicle, a window opens up allowing you to watch the vehicle move about, even when you are busy on another region of the map. You can also change its itinerary, inquire about the transportation rating, survey the type of cargo, and so on.

If you decide to start with roads, you will have to establish a connection between two cities for passenger and mail transport, or between a production site of base materials to the factory where they will be treated. To accomplish this, you will have to level the terrain, or construct bridges and tunnels. Of course, all this costs money and you will have to plan your route while trying to minimize cost.

Finally, you will have to attribute a precise itinerary for each vehicle. For example, a truck transporting wood, will need a loading bay in proximity of a forest, and a loading bay destination near a sawmill.

Different places of raw material production exist: there are the coal and iron ore mines, forests, farms and the land based drills. These materials can be brought to factories capable of producing goods with them. For example, the iron ore first transformed into steel in the steel mill, will finally be utilized in the factory for fabrication of goods. Notice that this transformation requires two different stages, first from the iron ore mine towards the steel mill, and second from the steel mill to the factory.

I could still talk about the transportation of coal towards the power station or even that of livestock and grain towards the factory, but I would rather mention the other possibilities of Transport Tycoon. There are still the trains, boats and airplanes to explore. It's when you add up all these different ways of communication that Transport Tycoon takes on its true dimension.

Adding the railroad, you will have the choice of stations with one to four tracks, switching, crossings, warehouses, and signals. You can also construct bridges (from simple bridges made of wood to those made of steel for high speed trains) and tunnels. Your choice of locomotive is important because you have to take into account the operating costs per year, traction capacity, reliability, etc. During the course of time technology evolves, and new models are proposed during the game. You will even have the unique possibility to use prototypes during their first year of production. If you refuse to use them, they will be offered to your competitors. Know that using a prototype will mean many break downs and that if you accept the offer without buying one in the future, there is a great possibility that these types of offers will no longer be proposed to you.

Each wagon has its own characteristics just like the trucks do. Make sure you use each one to its best abilities to maximize profits. To this effect, it is not a good idea to use passenger wagons to transport livestock.

Boats, of course, do not need roads. You will have to build ship docks in proximity of the manufacturing areas and one or more ship depots to put your ships in storage. The boats are not exclusively used for transporting merchandise because it is also possible to transport passengers by ferries and hovercrafts. Ships have an advantage over the other means of transportation in that they benefit from a larger transportation capacity.

Finally for airplanes, you will have possibilities to build two types of airports (small or large) with a Junker Ju-52 as your first plane. Like trains, different more powerful aircrafts will appear during the course of time, like the Douglas DC-3 Dakota. Here, speed is the major difference but the transportation capacities are not great.

To attract tourists and industries, a good publicity campagin is required. This is exactly what you can do to attract more business for your bus and train stations, your airports, and so on, when activity is at a low. To avoid having to make this costly decision, you will need to watch attentively what the people think of your different stations and to take the necessary actions to provide a better service.

There is no free lunch in life, and Transport Tycoon simulates that axiom well. Following the difficulty levels, the number of competitors increase from two for the easy level to four for the harder level. However, it is still possible to customize the difficulty levels with the number of competitors, the frequency of break downs, the operating costs, etc. You can also play Transport Tycoon with two players via a null modem cable which gives a true feeling of competition.

In summary, Transport Tycoon is not only hugely addictive, but the strategy involved keeps you thinking of what to do next to make your company strive. It is very easy to internalize the game and consider the company your own. The game sports extensive details, and a compelling ambience, from the smoke from the steam locomotives, to the railroad signals that change, and even the railroad crossing itself. The geography is varied with four lands to choose from, each different in appearance, serviceability and strategy. The animation is realistic, up-paced, and incredible for its time. Simply put, this is yet another Tycoon installment that features impeccable sound effects, music and graphics, coupled with a fantastically gripping and interesting game model. It is all too easy to burn away hours without realizing it. 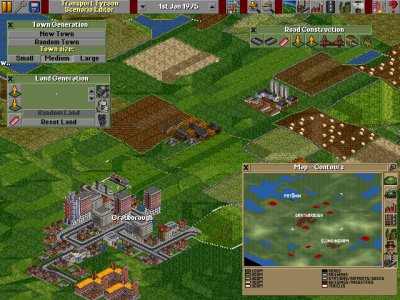 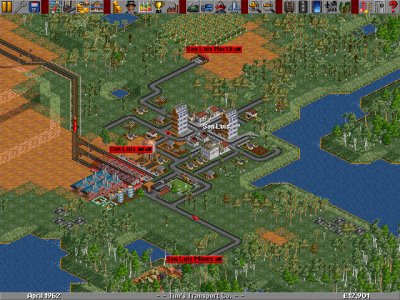