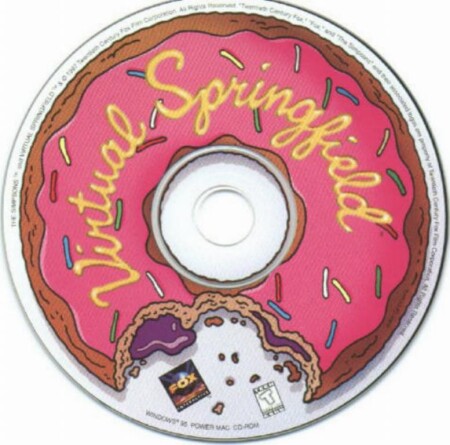 The Game
Virtual Springfield ranks as the single greatest Simpsons game ever created. Released for the PC by the now-defunct Fox Interactive in 1997, this ambitious title strayed away from the simple, level-based designs of past Simpsons games and instead gave you full reign to explore Springfield's hallowed grounds at your leisure, handing you a full 3D recreation of the town to run around in. Ever wished you could order a Squishee at the Kwik-E-Mart? Virtual Springfield let you do that. Ever had a hankering for a nice, tall Flaming Moe? Virtual Springfield gave you all the ingredients, so you could head on over to Moe's and make one yourself. Ever wanted to plunk yourself down on the Simpsons' couch and watch TV, pay a visit to Homer at Sector 7G, or sneak into Principal Skinner's office and hack into his computer? Virtual Springfield could make it happen.

Upon booting up the game, the familiar Simpsons theme would kick in and you'd be thrown right in the middle of Town Square, where an ever-cheerful Troy McClure (voiced by the late, great Phil Hartman) would welcome you to Springfield, U.S.A., "a pea-sized town with lima bean-sized dreams." Through the eyes of your Really Virtual Viewthingy, you'd then be set free to explore the enormous cityscape around you at your leisure. No set storyline, no ultimate goal -- just a ton of freedom to explore Springfield's many famous locales, including Springfield Elementary, Krustylu Studios, Noiseland Arcade, Stone Cutters headquarters, Springfield Gorge, and many more. Along the way you'd collect various items that would help uncover and unlock new areas and, eventually, you'd begin finding collector cards strewn across the many different destinations. Having collected all 74 character cards (no small feat, I might add), the game would direct you to a secret FOX website full of tips, tricks and cheats. (Sadly, the site doesn't exist anymore.)

I'd originally planned on writing up a simple review of Virtual Springfield, but there's just so much awesome stuff hidden within this massive game that I'd be remiss not to delve into its many crevices, if only for a little bit. Indeed, despite being one of the largest and most unique Simpsons games out there (with 35,000 frames of original animation and voiceovers from the entire regular cast), Virtual did not have a very wide release and flew under the radar for most of the gaming public back in '97. Consequently, it has never enjoyed very much success compared to a lot of other games and, despite its amazing production values, has never really gotten the recognition becoming of such an ambitious, interactive title.

We'll begin our tour of Springfield at the most appropriate of places, the venerable Simpson residence: 742 Evergreen Terrace. In case you're wondering, the particular mechanics of the game are pretty simple: after navigating through the town and reaching your desired destination, a simple click of the mouse is all you need to enter your desired locale and explore it in detail. In the yard alone, we can read the family's mail, open up the garage door (more entertaining than it sounds), make Bart sneak out his upstairs window, watch Marge tend to her garden, and enjoy an exchange between Homer and his longtime foil, Ned Flanders. ("Hey Homer! How's the mowin' goin'?" -- "Shut up, Flanders.")

Once inside, we've got a choice to make. You'll probably end up touring the whole house anyway, so the choice you make doesn't really matter all that much, but I'd suggest touring the ground floor before heading upstairs. Then again, I have a habit of making rather pointless decisions. A left leads you into the living room, a right will take you into the dining room, and the family's bedrooms can be found upstairs. I'll take a left turn at this point and head on over to the living room, just because I can.

Compared to other rooms in the Simpson house, there isn't much to do in the living room. Occasionally, you'll get to see Homer "ooh and ahh" in the massage chair and sometimes Patti and Selma can be found sitting on the couch nagging the other family members. I've also seen Bart take a flying leap across the room and sink waist-deep into the couch, though that seems to be pretty rare. Before you head over to the family room, though, be sure to click on the fireplace for a nice chuckle.

Depending upon which characters are lounging around when you show up, there's always something neat to do in the family room -- making Bart and Lisa argue at the click of a button, calling up Moe's for a little prank calling, watching TV, browsing through the family photo albums, and a lot more. Note the "So You're Stealing Cable?" panthlet in the magazine rack.

Next up, the kitchen. If you've ever wondered what exactly the Simpsons keep in their often-seen, yet still mysterious green refrigerator, then you're likely to bust a nut when you discover you can actually open the thing up and take a peak inside. Up in the icebox we've got some "Glutton Boy" dinners, "Gator Tots," and something called "Thinner Dinners." Down at the bottom, predictably, there's a bunch of Duff cans, though the plethora of distinct varieties of the stuff is quite impressive: Lite Duff, Lager Duff, Draft Duff, Raspberry Duff, and Ice Duff. Brilliant. If that doesn't tickle your pickle, you can always click on the phone and speed-dial your favorite Springfield residents to hear some hilarious answering machine messages. Or, of course, you could spend your time trying to figure out why the Simpsons' matriarch seems so depressed sitting at the dinner table. Midlife crisis, perhaps?

Lighten up Marge...It's just a videogame.

Upon reaching the dining room, we can see Marge has regained her composure and, in the window of about two seconds, has moved to the dinner table to join the rest of the Simpson clan for a bit of grub. She seems pretty content at the moment, so I guess everything's peachy. Again, not a whole lot to do in the dining room, except play around with the characters a bit and watch the comedy ensue. Oh, and don't forget to click the painting for a neat little surprise. Sorry, folks, but I can't go and reveal everything about Virtual Springfield. What would be the fun in that?

Ahh, the second floor. Home to the family's bedrooms and, consequently, their most private possessions. Bart and Lisa's rooms can be found on the left, Maggie's on the right, and directly behind us is the master bedroom, where some of the funniest scenes from the cartoon take place.

Bart's room is where things really get interesting, with all manner of shit to toy around with and even a hidden minigame where you pelt eggs at the Sideshow Bob poster in the corner. The bookshelf, the desk, and the closet are all yours for the browsing, though whatever you do, don't forget to take a peak under Bart's bed...

Here you'll find a diagram directing you to Bart's locker at Springfield Elementary, where you'll find a special slip granting access to Grandpa's mysterious bottom drawer at the Retirement Castle. (You'll just have to guess what's locked away in there.) And did I mention the Homer voodoo doll sitting next to the Playdude? There's nothing quite like jabbing a needle at Homer's head and hearing him yell from the other room, "Maaaaaaaarge, my face hurts again!" Fucking priceless.

In Lisa's room you'll not only find a shitload of books and an interesting Malibu Stacey playset, but you'll also see a note about feeding the class gerbil at school -- use this to unlock one of Ms. Hoover's desk drawers. Your prize? A bag of gerbil food. Not the most useful item in the Virtual Springfield universe, but you'll need it in order to fill up your inventory and complete the game.

And our final destination in this week's romp through Virtual Springfield? Homer and Marge's room, of course! There's lots to do in here, not the least of which includes heading into the bathroom to answer that age-old question -- toothpaste or shampoo, which will reach the drain first? Other highlights include the Mr. Plow jacket hanging in the closet, Marge's makeup table, and the old Springfield High yearbook sitting in the dresser drawer. There's also a hand-written note in there beckoning us to the Nuclear Power Plant: "In 7G where the donuts be, If you be clever then pull the lever, Then tug the thread to move ahead, If frosted treasure be your pleasure, Tweak the light for sweet delight." 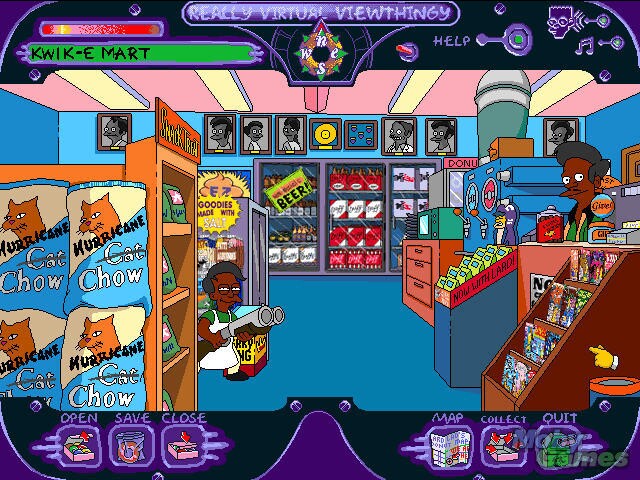 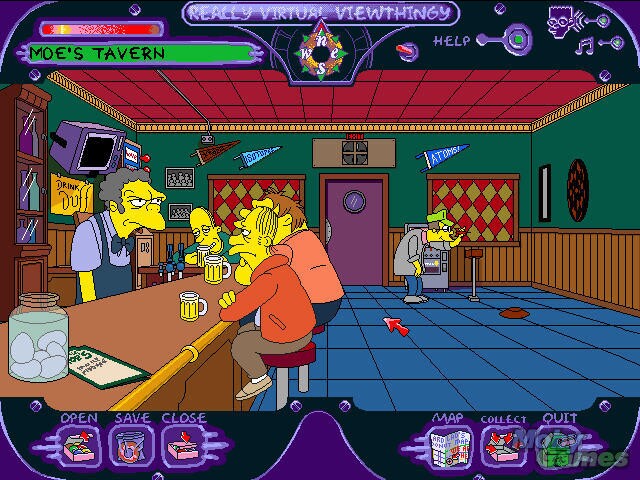