The Game
The famed Need for Speed series was designed to a high standard of gameplay and aesthetics, and is still running strong after a dozen installments. From the beginning it was obvious that Electronic Arts had the right idea -- combine slick graphics with a streamlined interface and real-world physics to produce an action sim that is accessible to casual gamers yet challenging enough for jaded hardcore types. This first chapter lets you drive eight famous cars from Lamborghini, Ferrari and others. Detailed information about the cars is included, as well as some great tracks to drive them on. With the game's graphics being well ahead of its time, and physics that lock you into the driver's seat, the series was a hit from the start.

However, as groundbreaking as Need for Speed was, there is always room for improvement, which led to the Special Edition being released a year after the original. I am often undecided whether or not a new version of an existing game is worth either the money or manpower. In this case, the answer is yes. This edition enhances the original as well as adds new material. Here is a summary of the additions:

Although we take in-game CD-based soundtracks for granted these days such was not always the status quo. The Special Edition includes an excellent selection of techno, rock and heavy metal tracks which can be shuffled to play at random order or made into a specific set list. The effect works very well in setting the mood and tempo of the game in the same manner as current titles like Grand Theft Auto III. Driving and music go together quite nicely, particularly when you have just the right driving songs.

The Special Edition makes the police much more aggressive and persistent. Count on being chased down with a vengeance should your need for speed be too great. Do not expect to outrun the cops in your Diablo so easily this time. They will catch you if you slow down just a bit, or make sloppy turns. This isn't Pole Position -- you cannot slide all over the road and expect to stay ahead of the chase. To that end, the Special Edition tweaks the driving model and makes it much more challenging than any arcade title. It's not as severe as Grand Prix Legends, but then again full dynamic modeling is not the focus of this game.

However, this does not mean Speed is a cakewalk. One thing that makes driving these cars challenging is that there is no means of producing downforce. If you are too fast for an upcoming turn and start to brake in panic, forget it; the car will spin or crash eventually no matter what. If you shift during turning, make sure that you know how to hold your machine on the track. If you are cornering too fast you better learn how to drive without grip. If you want to win the race you have to get your driving chops down pat.

Because the gaming community has a steady stream of newcomers there might well be people who have played later editions in the series, but missed the historic first. If you can appreciate the evolution of a classic series, and have wondered how the designers managed to make the latest version so amazing, you should see the roots. And of the two versions of the first release, the Special Edition is simply better than the original. In fact, it could be argued that the Special Edition is what Need for Speed 1 should have been, had Electronic Arts had more time to get the game to market. It contains 100% of what was initially intended.

The Need for Speed Story
Electronic Arts first joined forces Road and Track to produce the first chapter of the legendary Need for Speed series in 1995. The result was easily one of the best action/racing simulations of the year. Need for Speed was originally a 3DO title, and bears similarity to another Electronic Arts 3DO game of the era, Road Rash. Of course, the PC version of this game offered much better graphics and sound than any console-based system of the time. Simply put, Need for Speed was a very addictive and challenging game. The Need for Speed formula gives you a selection of some of the most unattainable cars in the world. This version includes the Acura NSX, Dodge Viper RT/10, and Lamborghini Diablo VT, to name a few. Once you've selected your dream machine, you would race on the most photorealistic tracks available in the mid 90s.

What also made Need for Speed unique is that all sounds were digitally sampled from the actual cars on a test track. Each car has its own sound when revving up the engine, honking the horn, and even burning rubber. If you happen to crash your dream machine, you heard the most realistic sounding crashes then digitized, and I've been in enough fender benders to know those sounds well. The sickening sound of metal twisting and glass shattering is no fun in a real car, but in NFS it is entertainingly morbid. Similarly, as we have since come to expect in an Electronic Arts production, voice narration in the information screens is first-rate.

This first installment set the high-expectation level for the series, and it is no surprise that it is still going strong. It offered an abundance of options to enhance your gameplaying experience such as head-to-head play, time trial, tournament mode, and a single track mode. In certain modes, you are chased down by the police, so keep checking your radar detector, because getting a speeding ticket takes away precious time and could hamper your chances to win the race. The laws of physics are applied to all vehicles using the detailed performance specs on each individual car. A Porsche 911 Carrera drives like a real 911, a Dodge Viper drives like a real Viper. I prefer the 911 personally, as it handles like a dream on twisty roads. The Lamborghini Diablo VT is best for the straight-aways.

The Bottom Line
It was nice to finally see an action based road racing game with a realistic driving model. Need for Speed was final proof that Electronic Arts knew (and still knows) how to make the some of the best looking games for the PC, games that play as good as they look. If you want an ideal example of a fun racing title of the mid 90s, with a realistic driving model, cutting edge graphics for its time, and detailed vehicle information without needless complexity, then Need for Speed will do the job. 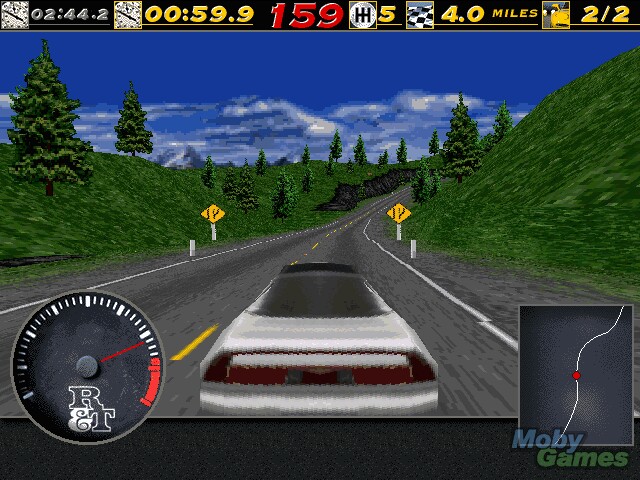 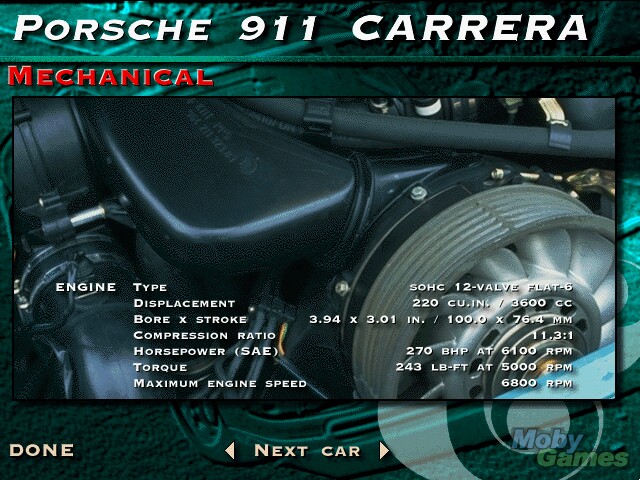