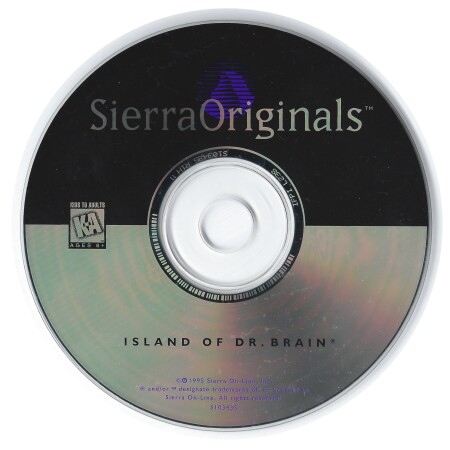 The Game
When Sierra released King's Quest V in 1990 it took a revolutionary step forward. It was one of the first 256 color VGA games, with stunning graphics and a great soundtrack. With the success of KQ V, Sierra released many titles using the same game engine. This system incidentally uses a mouse-driven system that replaced their SCI system where the player still typed in commands. Although this was a positive step in the general direction they received some flak from some who criticized the system as being too easy to play with no real puzzles.

That, however, is a subject of debate that has lasted a decade. Suffice to say that The Island of Dr. Brain, sequel to The Castle of Dr. Brain, uses the mouse-driven interface with with a different approach. Gone is the animated hero you moved across the screen. The game is seen through a first-person perspective. As for the plot, the player is placed in the shoes of Dr. Thadius T. Brain's lab assistant. The player immediately learns that Dr. Brain was ambushed in his castle, knocked unconscious and mugged of his plans for a super-secret invention. Little did the thief know, the good doctor's plans cannot work without a powerful battery, conveniently located in only one place in the world -- his island fortress. Unfortunately for the player, Dr. Brain was rather paranoid when it came to keeping his inventions safe, so he installed puzzles throughout the island so only those with worthy cerebellums could enter. Armed only with a hint watch (which dispenses hints for those inevitable brain-crashes), a brain, and of course some handy-dandy brain drugs for those hard problems, the player is dropped off on the island to find the battery and safely return it to Dr. Brain. Yes, the plot is slightly laughable, but this game is geared toward the younger players as well as the older ones, so it had to be age-friendly.

Island is a marvelous game for its type. More than just a collection of brain teasers, it was an educational game in the best sense of the term. It educated, but first it entertained. The designers never lost sight of priorities; first and foremost, to create a whimsical, eye-catching, imagination-sparking computerized busybox. Anything else, such as teaching players about astronomy or offering a primer in computer programming, came afterward. Self-conscious educational do-gooding was left out entirely, and it wasn't missed.

Island and Castle have a great deal in common: the same style of colorful, loony graphics; the same interface and game structure (one puzzle after another, loosely linked through a minimalist storyline); and a mixture, in the puzzles themselves, of the old-fashioned and the new, the classic and the exotic. Both games have the same sense of humor; rich in puns and gags, and most are pretty clever.

The music is atmospheric with some digitized effects. Each screen has its own musical score which, while being fairly simple, adds a great deal to the game. Digitized sounds include doors creaking open, armor clanking and one or two exclamations from the player. (Ouch! etc.) The graphics, being mostly still pictures with only some moving parts on each screen are excellent and really nice to look at -- excellent examples of Sierra's 256-color VGA era.

An icon panel becomes visible when you move the mouse to the top of the screen. The icons are self-explanatory : an eye for looking, a hand for doing or using, a control panel for setting the volume, saving, restoring and quitting and a window which represents the inventory and which contains the active item in the inventory. An icon depicting Dr. Brain's head gives information about the room you are in. Moving is done automatically when you open a door. Icons can also be cycled through by pressing the right mouse button while the left button executes the current icon. The presentation is very professional for its day.

Though it does have quite a few adventure elements, The Island of Dr. Brain is primarily a puzzle game. Therefore, the quality of the puzzles would make or break the game. And they definitely make it. The conundrums of the game will utilize all the skills one has learned ... in elementary school. Don't scoff. Though they are derived from simple concepts, most of the problems, on expert mode at least, could stump the brightest. The game wisely avoids trivia, alien languages, and specific knowledge. Instead, it concentrates on common-sense things such as categorizing, map skills, patterns, object recognition, and classic puzzles. The difficulty levels make the game playable for people of any age -- novice is suitable for children, while expert will in fact stump many.

Island raises the challenge for the player as several of the puzzles demand specialized knowledge. The puzzles range from the straightforward ward (solving ciphers, putting together a jigsaw puzzle) to the more unusual (choosing the right elements to match a given spectrographic analysis, measuring out quantities of liquids of various densities to make a counterweight balance). Some puzzles are repeats from the game (the word search, though here it is, a foreign language; the magic square; programming of a robot); others are new to the Dr. Brain universe, though not in any other respect. (There is a four-disk rendition of the Tower of Hanoi, a search or hidden animals in a forest picture, and make-a-rectangle-out-of-a-bunch-of-Tetris-shapes puzzle, for instance.) As a result, Island appealed to a slightly older player than Castle.

The Island of Dr. Brain is also an adventure game. It shares a similar console, the commands being look, use/touch, inventory, back a room, item, and room description. Throughout the game, items must be collected and used, though they are usually only used in the same room that they were collected in. When a puzzle is started, the game switches to puzzle-mode, allowing the user to solve the puzzle, read the instructions, or use his or her hint watch. The watch offers suggestions from Dr. Brain. There is also a difficulty slider which alters how challenging a given puzzle is. The setting of difficulty levels in particular works quite well, though I refused to give in to an easy escape. 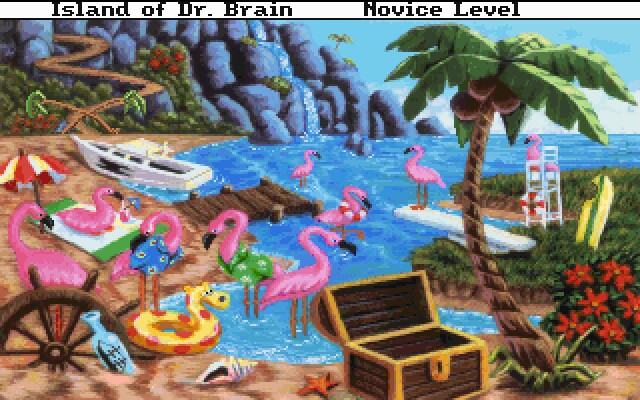 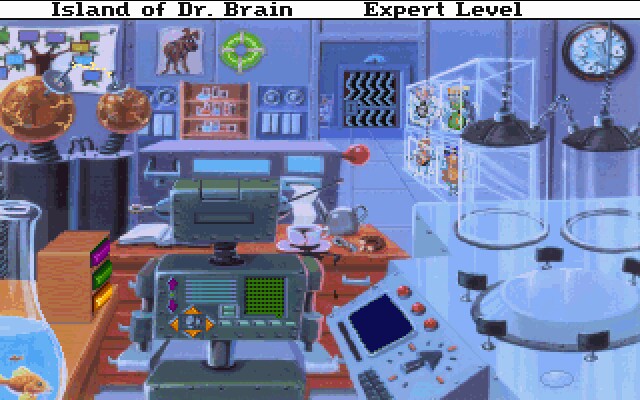