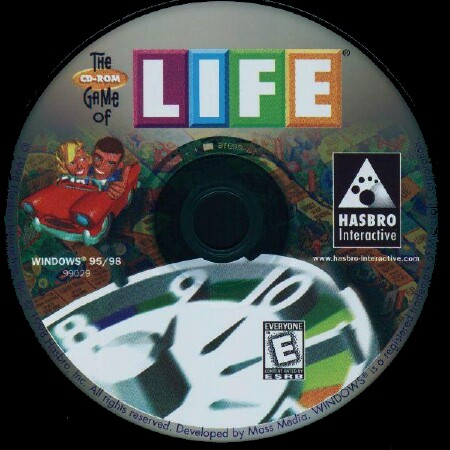 The Game
The Game of Life allows up to six players to gather 'round the ol' monitor to take turns spinning the wheel, or rather clicking the pointer that spins the wheel. (Could you really gather six people around a computer?) At most I could imagine two, maybe three, seated around a computer playing this game. The ability to allow multiple players seems better suited to allowing one person to play multiple characters, say one person playing as two against one or two computer opponents. Any more than two computer players and the game is drawn out to a greater length than is humanly possible to sit through. For solo play, I found that playing two characters to one computer character made for the most interesting play. That way you get to play more often than the computer, and you get to watch the computer have its fun without having to endure too much non-interactive tedium.

The actual gameplay is fairly lighthearted. In fact it's practically nonexistent, but then I wasn't expecting Starcraft-like strategizing as I began the game. Along the lines of other board game adaptations involving movement along a set path, this one involves nothing more complicated than clicking a picture that simulates the spinning of the famous plastic dial. But obviously I wasn't expecting to be spinning the actual thing; what I expected was a colorfully animated facsimile, and that's what the game delivers. Other gameplay elements have been left intact. Once the dial's spun, a player moves along the track the specified number of spaces and plays out the scenario listed. These include things like "Produce rock video, Pay $100,000" and "Find buried treasure, Collect $80,000" and come with cartoons and voice-overs that bring them to... life. Some spaces involve playing little minigames (the most complicated that the gameplay ever gets here) like picking squares to match prize dollar amounts. The game board itself looks good and is actually a treat to pan over to check out all of the little scenes.

In the beginning, you either choose the route to a career or to school. Along the game path of either choice you eventually hit the space to get married, without so much as the choice of your partner's gender (that could've been a cute '90s gesture and would've given a fresh twist on all the baby-rearing that goes on in this game.) Along the game path the music that plays in the background changes era every sixth of the way, going from the '50s all the way through to the 2000s (which sound suspiciously like the '90s).

Life's end consists of the players hanging up their boots and retiring. When a player retires they select their neighborhood and then spin in effort to receive bonus money. Their are two options of retirement communities, Countryside Acres and Millionaire Estates. Countryside acres has less opportunity to lose money with retirement, but the most the can expect to be awarded is $45,000. Millionaire estates has many more chances to lose money. Players who retire here could either lose up to $150,000 or win up to $200,000. Once all the players are retired, each player's Life tiles are revealed and the money associated with each tile is given to its respective player. The player with the most money after it all is the winner. 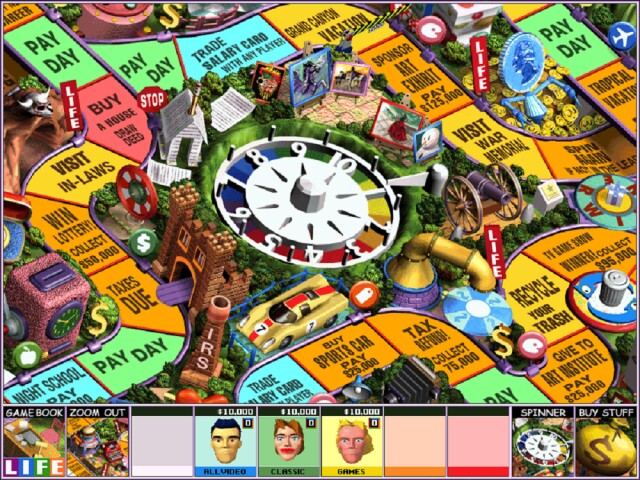 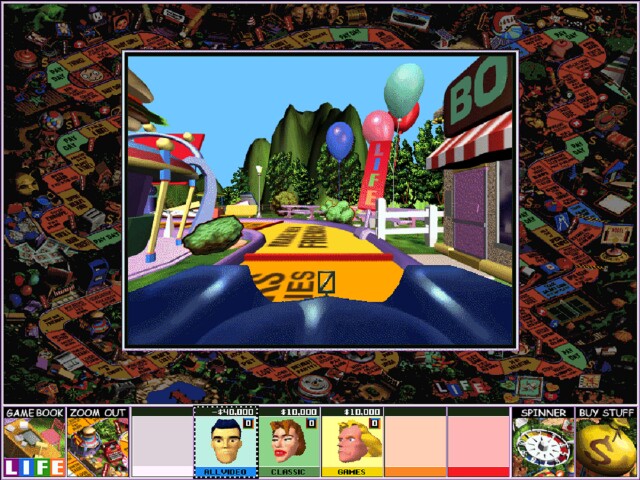