The Game
As a first-person adventure, The Elk Moon Murder indulges our secret desire to play police detective for the day. While lacking the glamour of NYPD, players can expect to encounter a traditional plot filled with eccentric locals, numerous suspects and enough red herrings to feed a small feral cat population. In the wake of Anna Elk Moon’s murder you are assigned to catch the killer by examining the crime scene, interviewing suspects and checking alibis. Between tangled-love affairs, ex-husbands and the theft of a rare and valuable artefact, it seems that everyone had a reason to murder the ill-fated Elk Moon.

The adventure is set in the city of Santa Fe with the adjacent pueblo allowing designers to incorporate elements of Native American mythology and tradition. The setting also provides a visual treat due to the combination of lush photographic stills and full motion video sequences that provide the backdrop to this mystery. Crucially, the role of the police detective which you adopt is devoid of characterisation, remaining mute throughout the game. This use of an undefined, genderless protagonist helps to create a sense of direct immersion as you progress through the adventure.

The interface is generally unobtrusive with a cursor identifying spots of interest, while a directional compass allows for navigation through the environment. A simple right-click allows the player to save or restore games, adjust in-game volume, or exit the program. This easily mastered interface quickly allows uninterrupted focus on game play. The majority of interaction occurs through a Personal Digital Assistant, or PDA, a device similar to a palm-top computer. Your PDA stores information on informants and suspects, allows you to review earlier interviews, tracks alibis and forensics, and alerts you to breaking developments in the case. Due to the sensitive nature of the situation, the Chief assigns you a Native-American partner, Detective John Night Sky, who acts as your spokesperson in interviews. The investigation is further aided by the help of Detective Rebecca Orlando, who is responsible for checking alibis.

The success of your investigation depends largely upon priorities. With just five days before the FBI assumes jurisdiction, the investigation is a perilous race against the clock. Timing is the most challenging aspect of the game, with each day split into eight-hour time blocks. Certain actions deduct time from this total, such as interview questions, reviewing evidence, reading newspaper articles and ordering phone and vehicle traces. Furthermore, each analysis by the forensics department and alibi check takes a prescribed amount of time to complete, so you must prioritise to follow up the most promising leads. Although The Elk Moon Murder can essentially be completed in a single afternoon, most will succumb to the plot misdirection and blind leads that are a prominent feature of the game. Following the wrong clues can result in having to restart completely – a tiresome and disagreeable chore because so many of the interviews to conduct and evidence to examine overlaps, regardless of which lead you focus on. This becomes particularly frustrating when the gamer may be forced to run through the game four or five times to fully uncover the mystery.

The plot is standard detective fare, although a degree of originality is provided by the inclusion of Native-American characters and numerous sub-plots concerning the suspects’ private lives. The soundtrack consists primarily of ambient sound effects and panpipe music, with a few guitar riffs at the start of each day, though these seemed out of place when set against the beautiful Santa Fe landscape. The incorporation of FMV interviews supplies an interesting dynamic, though many actors give incredibly melodramatic performances. The eyebrows of Astrid Ames, one of the informants in the case, deserve to be credited in their own right, and I never failed to be amused by Detective Night Sky’s over zealous condemnation of every character that he interviewed, ‘Oh yeah, he did it for sure” and five minutes later, of a second suspect “I think we got our man.” If you are to be successful in Santa Fe, you’ll need to be far more selective than your over-paranoid partner!

Instead of the seamless FMV sequences in games such as The X-Files, interview windows overlay the background. Fortunately, this does not detract from the immersive quality of game play. Unfortunately however, a dauntingly large cast results in underdeveloped caricatures, from the cigar-smoking Chief of Santa Fe Police Department to the scandalous gossip Carrie March. Such character eccentricity, their unbelievable love affairs and feverish over-acting makes this Santa Fe Mystery (the first in a two-game series) play more like a daytime soap opera than a hard boiled detective adventure.

The game has many good points; an attractive backdrop and interesting sub-plots, with the crime scene investigation sequence particularly engaging as you sift through various clues, taking photographs and ordering forensic analysis. 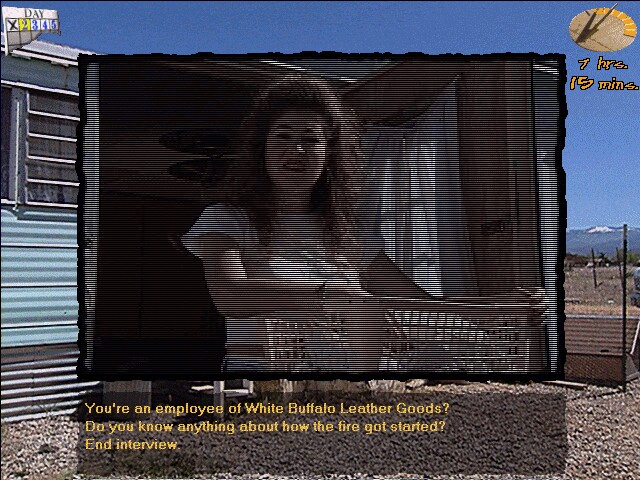 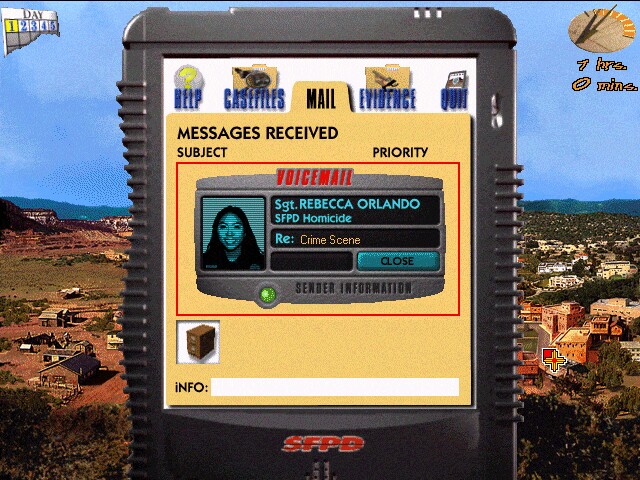