The Game
The Dark Eye is an adventure game based on the works of the iconic Edgar Allan Poe. Poe was a 19th century American author who has gained immediate recognition with his eerie poem "The Raven". His other works have largely been marginalized during his lifetime, though later not only poetry but also his mystery stories have given him prominence. Nowadays he is widely if often superficially embraced by pop culture. Even his own persona is identified with the ominous demeanor of his fictional characters in many over the top parodies of his writing style. Still, Poe is recognized by philologists, scholars, and fin de siecle artists themselves as a founding father of Symbolist, Modernist, and Surrealist aesthetics in poetry and a pioneer of the narrative driven mystery fiction.

The Dark Eye, rather than being just a tribute to Poe, follows and expands on a prominent theme of his works: the exploration of the human subconscious. The game takes its inspiration primarily from Poe's prose, but Poe's poetic mind's insights are also ventured upon. The mystery stories, on first sight, have somewhat similar tendency as the poetry of keeping away from the earthly, the tangible, and mundane. They almost always focus on introspective minds radically detached from reality, people not unlike the narrators of the author's poems. However, the stories are mostly concerned with elements that the poems have left out of their sphere of interest, namely with the horrible consequences of when such minds crash with reality.

A particular psychological fascination of Poe that is prominently utilized in The Dark Eye is the discipline called phrenology. Popular in the 19th century, it has had a major influence on that period's practice of psychiatry. However, it is now considered to have no scientific basis and has since been abandoned. In short, phrenology is both an art of telling about a person's mental capabilities and personality traits by the shape of the person's head (by reading so-called bumps and fissures) and a theory of dividing the brain into smaller organs representing specific faculties of human behaviors and dispositions. It is thus intriguing that the game makes a claim on its stylized menu screen that it will analyze the player's mind in a phrenological manner. The game will even draw out a rough phrenological chart of the player's brain that becomes increasingly complete as the player progresses further into the game.

The truly eerie events in the game start to transpire every time a day abruptly ends. This moment always comes suddenly and unexpectedly. In an instant, a shadow encompasses everywhere. The sky dims and then becomes yellow. The house becomes completely dead, devoid of any signs of life. You start to hear whispers in the dark: unintelligible, menacing, and otherworldly. In some places, they become louder and more distinct. On such occasions, it is important to remember this: beware of your own reflections. It is through them that you are suddenly pulled into other worlds, where your avatar will lose the faceless submissiveness and will become one of various peculiar and sharply defined personages of very expressive countenances. Every one of these personages will soon be revealed to be a truly nightmarish individual. The places you visit in these "dreams" contrast with those inside the bleak, old house. They are visually wealthy, brimming with details, expressionistic, and moody. Some nights you will find yourself inside higher society sublime private interiors, other ones among the rich merchants at an Italian Carnival, where half-starved child beggars loom on the other side of the bridge. At one point, you will come to see a labyrinth like cellar complex, with numerous bottles of wine, skeletons, and other ominous surprises. Finally, you will find yourselves in a modest but cozy flat in a quiet neighborhood, filled with large numbers of delightful equipments crafted by hand.

In the course of several nights, you will be treated with 3 different dream stories, each shown in 2 separate but complementary dreams, from the perspectives of 2 characters that play an antagonist role to each other. Owing to the difference in the character's perceptions, in each story you will experience 2 separate realities in the same surroundings.

The Dark Eye's style of gameplay is strongly embedded in the way in which the stories, the worlds, and singular events in the game are presented artistically. This is a game devoted to perception and introspection. Playing it consists mostly of battling with thoughts in the subjective realities of the individual characters. You hear what the character thinks, you see what he imagines, and you grow disoriented by the disturbances of senses that are effects of his or her mental and physical illnesses.

In the end, if you are seeking a surreal, artistic experience with psychological undertones this game is for you. Even many years after its release The Dark Eye is wholly original. 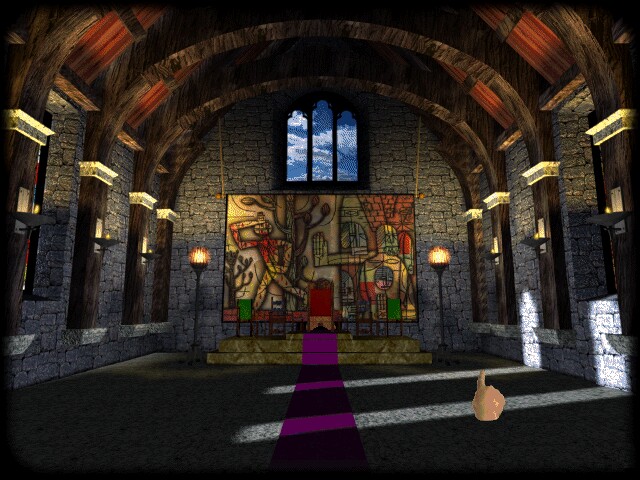 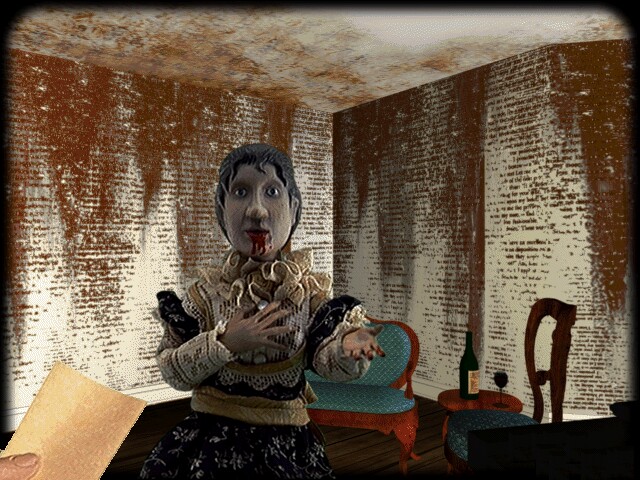