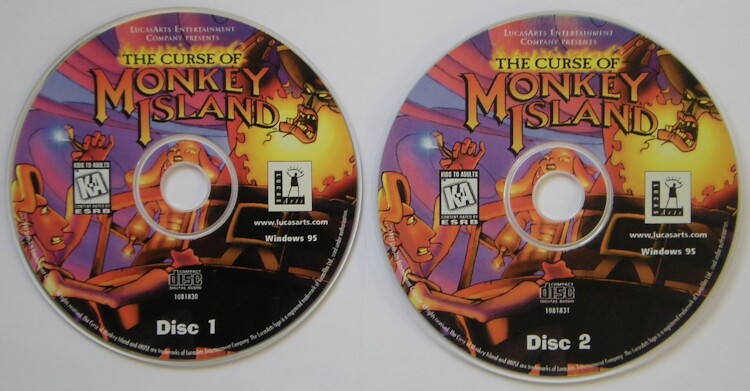 The Game
The Curse of Monkey Island not only retains all the atmosphere of the Monkey Island series, its superior graphics and gameplay ensure the rivalry between Guybrush and LeChuck to continue on for another chapter!

After the weird ending in Monkey Island 2: LeChuck's Revenge, Guybrush Threepwood is not really sure what has just happened. He is floating in the middle of the Caribbean Sea in a bumper car with only a half eaten corndog for food! Suddenly, he finds himself in a middle of a ship battle just outside of the Plunder Island. LeChuck takes him as a prisoner onto his boat, but Guybrush manages to escape (and sink LeChuck's boat) while stealing a huge diamond engagement ring from LeChuck. After he finds his love Elaine Marley on the beach, Guybrush asks Elaine to marry him and puts the ring on her finger. Yet again, it is Guybrush's usual luck—the ring is a cursed voodoo ring and Elaine is transformed into a gold statue! Even worse is that Elaine is again kidnapped by LeChuck who is now in the form of a burning demon. Guybrush has to find a rescue Elaine and defeat LeChuck for a third time. LeChuck just cannot seem to get used to the fact that he is supposed to be dead!

Many fans, including I, were worried about how the design team of The Curse of Monkey Island would pick up the story after the weird ending in the last game and how the series may survive without Gilbert. To this end, The Curse of Monkey Island was a very positive surprise. The spirit of Monkey Island is the same in this sequel as in the previous titles and the whole storyline is indeed very "monkey"ian. Everything is explained at the conclusion of this game—what happened at the end of the Monkey Island 2: LeChuck's Revenge? What is Big Whoop? Is LeChuck really Guybrush's brother? Can the boy get the girl? Why do adventure games cost so much? Where do babies come from? All will be revealed in the end.

The Curse of Monkey Island, like its predecessors, is split into parts. There are 6 parts, with the first part being a sort of a warm-up sequence. The game starts on Plunder Island where Guybrush starts his adventure. He then sets sail for Blood Island where he hopes to find a way to lift the curse. Along the way to Blood Island and Skull Island, Guybrush goes through some very amusing encounters, including many old friends and enemies such as the Voodoo Lady who has since moved to Plunder Island as well as Wally the Cartographer who tries to be a pirate. Guybrush also meets the former used coffin salesman Stan and the vegetarian cannibal Lemonhead. The new characters in this game are as colorful and fun as the old ones—Murray the demonic skull, Haggis McMutton (the pirate barb... or "buccaneer hair stylist"), and the whole Goodsoup family (known for their famous soup restaurant chain).

The ability to interact with the game characters is a priority for LucasArts, so there is a lot of speech in this game. LucasArts has chosen an excellent voice cast for all the characters in the game. The voice of Guybrush is provided by Dominic Armato, while those of Elaine and LeChuck are provided by Alexandra Boyd and Earl Boen respectively. The voices of several Hollywood actors are also featured, including Gary Coleman (Arnold of Diff'rent Strokes), Dave Madden (Ruben Kincaid of The Partridge Family), and Alan Young (Wilbur Post of Mr. Ed). Among the voiceovers, only Stan's voice is a small disappointment (for me, at least. I think of a faster and perhaps more Italian voice for him). The design team has chosen a relatively unknown cast to record the voiceovers of the lead characters. It should be credited for trying to find voices that fit the game characters and just big names just so they can be advertised. Guybrush comments on everything and everyone. His comments include the funniest jokes in the game. The Monkey Island humor remains the same (What does a banjo duel sound like? Not to mention the singing pirates.). The game also pays homage to popular pop culture. There are the mandatory quotes from Star Wars and, if you are careful, you can find jokes about other computer games like The Dig, Indiana Jones and the Fate of Atlantis, and Myst. Max the rabbit makes a cameo appearance, as usual.

There is much to explore in The Curse of Monkey Island. The design team has written descriptions for all the places and objects in the game to make it really interactive. These include objects that cannot be picked up or do not have any real function in the game. Yet, they are more than just part of the background arts since Guybrush can look at them and be amused by them. This makes the replay value of this title much higher than the usual adventure title because you are bounded to find something new every time you replay the game. Like Monkey Island 2: LeChuck's Revenge, The Curse of Monkey Island offers 2 different levels of difficulty to choose from—the regular version, "a lovingly crafted voyage of infinite adventure", and Mega-Monkey "with even more sadistic conundrums". The level you choose cannot be changed after you start the game, so choose wisely.

Who may enjoy The Curse of Monkey Island? Everyone. You have to be a dreadfully staid gamer if you do not find yourself entertained by this title. While fans of the previous games in the Monkey Island series may get the biggest laughs out of the twisted plot connections across the trilogy while reminiscing elements that are oddly familiar, no previous knowledge of the Monkey Island series is needed to enjoy this game wholeheartedly. Guybrush's witty comments and humorous attitude should keep you smiling. In the end, The Curse of Monkey Island was a worthy sequel to a classic LucasArts series. 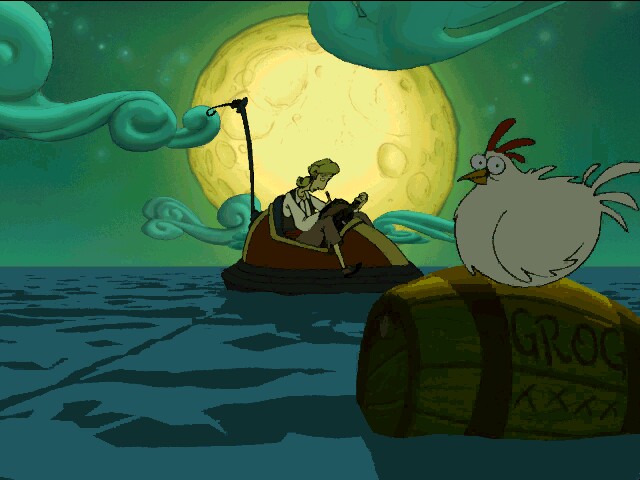