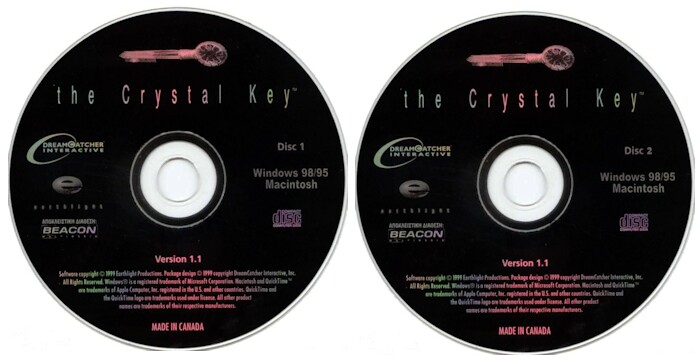 The Game
The Crystal Key is a good, old-fashioned, inventory-based adventure game, with some really pleasing and appealing graphics. The farther I went into the game, the more I enjoyed it.

The story itself is a very straight science fiction story, similar to MGM's old Stargate series, except that you won't find any Earth cultures such as the Egyptians, Atlanteans, Anistazi, et al., cluttering up the narrative—this is not sci fi, it's Science Fiction, to paraphrase Harlan Ellison.

The survival of Earth is threatened by an alien race led by a being known only as Ozgar. A transmission is intercepted by Earth from a race of people called the Arkonians telling of their fight against Ozgar. You are the test pilot of Earth's first hypership sent to the origin point of the Arkonians' signal, to find out what's out there and stop this menace. The game itself follows a linear path, which is self-evident, but you can explore around all you like.

The interface is nicely controlled via Apple's Quicktime VR, giving the player unlimited movement in looking around. Travel occurs via movies that transport you to the next point you want to go to, so no million clicks/steps to arrive at any destination, and the travel itself is fun, like being on a mini–roller coaster. Cursor changes to show hotspots, so no pixel-hunting.

Inventory is kept in a bag below the game screen, and inventory items are simple, not too many, all get used, and there's no scrolling to see what's in the bag. Captured inventory items float into your bag once clicked on, and to use the item, click once, then click on the desired area of the game, and the item floats itself into use.

The look of some of the gameplay areas is very similar to graphics from the Journeyman Project series. There was an alien vessel definitely reminiscent of portions of these games. The one-click cursor keeps gameplay very immersive. A desert world gives the player the feeling of being on Lucas's Tatoonie, and there is an excellent recreation of a jungle. There are smoothly polished marble floors to glide across. But the graphical high point is definitely the Arkonian city on the water, which includes some absolutely phenomenal design and movie sequences that are so pretty, they are worth playing the game for. Riven comes to mind. There is also some very Riven-esque tunnel work that's well-designed. The graphics of a rock hitting the water of a pond was just simply visually stunning.

The music and ambient sound are very similar to Jewels of the Oracle, and Jewels did pleasantly come to mind during gameplay, although The Crystal Key is not a straight puzzle-based game by any means. There are, oddly, portions where whole sections go by with no music or sound at all (either that or it cut out, but nevertheless, it was not there). Some sound effects that would have logically been present were not, such as the sound of a freight car you are traveling in, and it is simply missing a number of ambient sounds it should have.

An interesting thing included is a mapping feature that only goes for the very first portion of the game, handy for a learning curve overall and designed well in that it would serve an expert as well as a novice, and it is a subtle but strong entrance point in the game in that respect.

As far as puzzles go, there are very few areas in the game that even remotely resemble a straight puzzle; these are also built in a very immersive fashion, all are sequential, all follow and forward the story, rather than looking like the third ear on a pig's head (after all, I always keep a big fat slider puzzle to access my bedroom door at home, etc., know what I mean?)—there's just none of that here. The inventory is extremely well-designed. There are no red herring pieces, which I hate. All items are used and discarded once used, so there is no redundant, unnecessary clicking through an inventory scroll to get what you need. There is none of that assembling inventory items to make something you can use, and the items are cleverly used themselves, keeping the game interesting enough for an expert but simple enough for a novice. The design of the inventory is exceptionally pretty; each item is lit as though there were a spotlight on it—select one and the light pulsates lightly, letting you know it's available for use. There is no holding the mouse down and dragging to use an item, which is just ducky with me. The only design drawback in this area is that when interacting with environmental items, such as pulling a handle, it must be executed very slowly to work.

There is a lot of serious equipment here to hunker down and get working—generators, freight cars, spaceships (the grungy Han Solo/Star Wars kind, not the Kubrick/2001 kind), a diving bell, etc. One of my favorite designs in the game involves an Arkonian shuttle that looks eerily like a floating version of one of those Airstream travel trailers seen all over the American landscape, eternally 50s, smooth chrome metal land beasts.

I had some initial freeze problems that were solved by uninstalling the Quicktime on my computer and installing the Quicktime from the game disk. I also had a memory freeze, although I was well within system requirements, that I solved by allocating a heap o'memory to the game. There were some problems throughout the game using the save feature, and I had to work around these. There's a fair bit of waiting after each travel movie that I didn't like—left me tapping my foot. There were also some points in the game where the movies would lock up and then skip to the end of the sequence; at one point I had an inventory item jump to just suddenly appear in the inventory bag. The game inexplicably dumped out in the middle of a hologram sequence. I'd rather have to double-click on everything than have all the bugs I encountered, given a choice.

This is a game novice and expert alike can enjoy, well-written and well–thought out, simple but not simple-minded. If you are looking for a beautiful, immersive world mixed with classic Science Fiction, The Crystal Key is quite a find.

In the end The Crystal Key is a classic to give to a novice to enlighten her/him on the joys of adventure gaming. 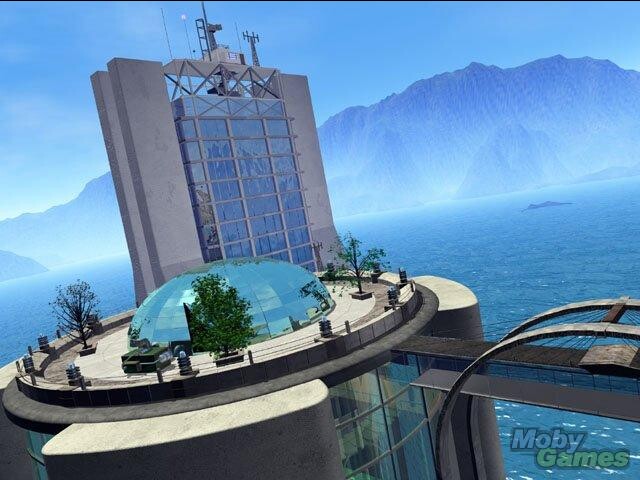 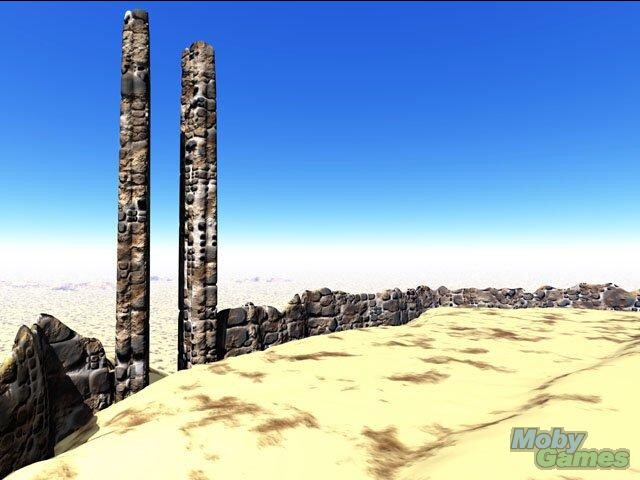