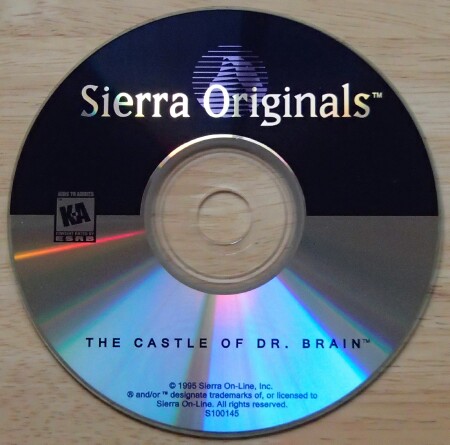 The Game
When Sierra released King's Quest V in 1990 it took a revolutionary step forward. It was one of the first 256 color VGA games, with stunning graphics and a great soundtrack. Since the success of KQ5, Sierra had been churning out games using the same game engine. This system used a mouse-driven system that replaced their SCI system where the player still typed in commands. Although this was a positive step in the general direction they received a lot of flak from especially the older players who criticized the system as being too easy to play with no real puzzles.

Castle of Dr. Brain uses the mouse-driven interface but with a different approach. Gone is the animated hero you moved across the screen. The game is seen through a first-person perspective. The plot is simple : You would like to become an apprentice to the famous scientist, Dr. Brain. To accomplish this, you must successfully traverse his puzzle-strewn house. Each screen contains one or more different puzzles, ranging from logic puzzles to puzzle building.

The game has three difficulty settings, making it accessible to all ages. (On beginner level, one of the rooms is a blank screen with a chest in the corner. When you click on the chest you get a piece of a jigsaw puzzle which you place on the screen, thereby "building" it up. The puzzle pieces are large and only about 10 are used to complete the screen. On expert level, the same room and puzzle is still there but the pieces have increased to about a hundred!).

The music is atmospheric with some but not many digitized effects. Each screen has its own musical score which, while being fairly simple, adds a great deal to the game. Digitized sounds include doors creaking open, armor clanking and one or two exclamations from the player. (Ouch! etc.) The graphics, being mostly still pictures with only some moving parts on each screen are excellent and really nice to look at.

An icon panel becomes visible when you move the mouse to the top of the screen. The icons are self-explanatory : an eye for looking, a hand for doing or using, a control panel for setting the volume, saving, restoring and quiting and a window which represents the inventory and which contains the active item in the inventory. An icon depicting Dr. Brain's head gives information about the room you are in. Moving is done automatically when you open a door. Icons can also be cycled through by pressing the right mouse button while the left button executes the current icon.

The game starts at the front door to Dr. Brain's castle. Selecting the eye icon I scan the screen. Descriptive information is available on every visible item, from the pink flamingo statues to the grass at my feet. Changing to the hand icon I click on the door. A hollow knocking sound fills the air. There is no answer. I move the icon onto the doorbell and click. The bell rings and after a moment one of the keystones above the door lights up. Uncertain of what to do I click on the flamingo and it screeches at me. The game informs me that that was not quite right and the keystone lights up again, accompanied by a music note. This time I click on the grey stone - the stone lights up again and now another stone lights up and another note plays. Every time I complete the sequence correctly, another stone is added to the list I have to remember. Finally I complete this "musical stone" puzzle, the door rolls up, and I enter the castle.

In the next room I have to solve mathematical puzzles. A magic square has to be completed, using numbers 0-9. Then 4 equations have to be built up using available numbers and symbols. After that I had to move numeric tiles in a square grid to form the right sequence. Using the three code words obtained (one from each puzzle) I could now open the door at the end of the passage and enter the next room. As I stepped into the clock room, a voice called out "You now have 60 seconds". Frantically I scanned the room with the eye icon and finally found, among all the clocks and watches, a plaque next to 4 buttons. It read : button 1 turns cuckoo clock on/off, button 2 turn the radio off if the cuckoo clock is on and the water clock off, etc. Using these guidelines and a bit of logic I had to work out a sequence to silence all the clocks in the rooms before my time ran out. After a few tries I managed and then had to open a 40 second time lock using a 30 second and a 25 second hourglass. After that I had to figure out a punch card system and punch in at the right time.

And so you slowly traverse the castle of Dr. Brain, changing floors using a manually controlled lift in a three dimensional lift shaft, solving codes, instructing robot arms in simple computer code, opening secret passages, building a jigsaw puzzle, completing a crossword puzzle, finding hidden words, locating stars constellations, etc., etc. The puzzles never grow boring and if you really get stuck you can spend a hint coin which will nudge you in the right direction. Each coin spent on a puzzle gets more and more clear help on what to do. For every room successfully completed you are rewarded with a hint coin.

Even today I would recommend this game to anybody This is a thinking game, more than a traditional adventure but I would certainly recommend it to anyone who enjoys mind games. 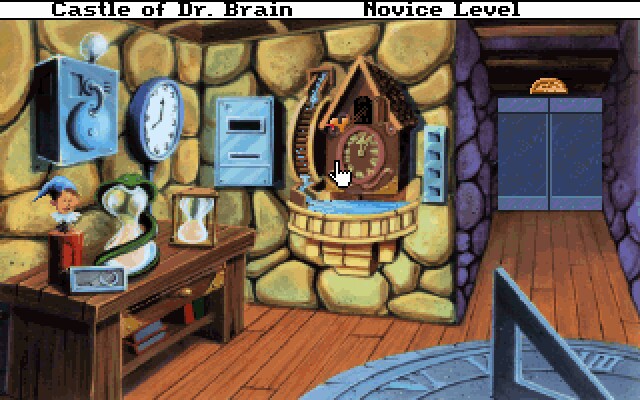 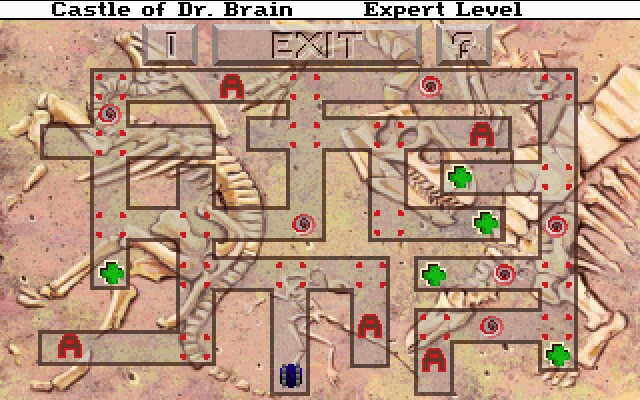