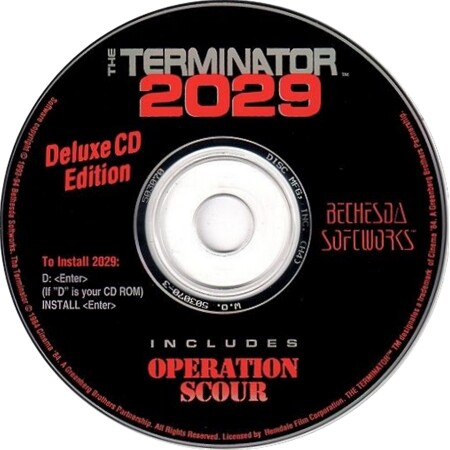 The Game
Terminator 2029 casts the player as one of John Connor's elite soldiers, genetically screened and both mentally and physically conditioned as a primary candidate for the neurological implants required by the A.C.E. Battle armor to function. With this piece of advanced technology, John Connor hopes to use it to turn the tide of the war and ultimately destroy SkyNet.

The suit allows the player to configure its equipment load out with a variety of weapons prior to the start of each mission. Weapons such as phased plasma cannons (PPCs) in the 40 watt range, fusion grenades, autodoctors for healing the flesh beneath it, shield systems, and a variety of other improvements as they became available would be part of its arsenal. Despite the action oriented direction of the game, it was not an FPS with the full range of motion that may be expected of it.

The game uses the grid-based, 3D system wherein the world is viewed from a first-person perspective with 90° turns and movement spaces. The upper window displayed the HUD of the 'action' area where the player used the mouse to move an aiming cursor around the screen and shoot enemies within a view that represented a moving 'shooting gallery'. The top border of the screen listed the equipped weapons and items that the player could activate at any time. On the bottom of the screen, the armor's condition, a radar screen displaying contacts, and a status/message window gave the player the perspective of being inside the armor.

Eventually, after accomplishing various mission-based objectives in the game, the player is called to defeat SkyNet by traveling to the orbital platform where it is housed and destroying it. There are a total of eight missions within the game with several of them timed.

Within each mission space, there are a variety of enemies that range from Terminators to flying HK Dragons and Eradicator units. All combat is handled via the HUD display within the helmet of the ACE armor. Everything is mouse driven, from targeting to interface manipulation, although there are hotkey shortcuts available for the interface that allow the setting of a primary and secondary weapon, for example.

A scan function is also available to the player allowing them to scan a target and gauge its health which is useful for knowing just how effective certain weapons are against their target or if they have no effect at all. Encounters are usually set and limited to a number of units, but the game will also randomly respawn targets within an area.

The interface radar displays everything within range and color codes each contact depending on what they are. Red dots indicate often hostile contacts, yellow dots indicate missiles, and the white dot indicates the grenade launcher targeting system which ranges out from the center green dot representing the player. The HUD also displays the current coordinates of the player along with the direction that they are facing in the lower left hand side of the action screen. The lower right of the interface is where inventory, mission objectives, scan functions, and an automap of the current region can be accessed from.

Since combat is real-time, running away and hiding in one of of the designated 'safe zones' scattered in an area would allow the player to either heal up, repair, or recharge their weapons in relative safety. Because of the limited movement that the engine placed on the player, getting shot from several different directions without knowing who was doing the shooting was often a problem that required the player to pay close attention to the radar as opposed to being able to freely look about onscreen. 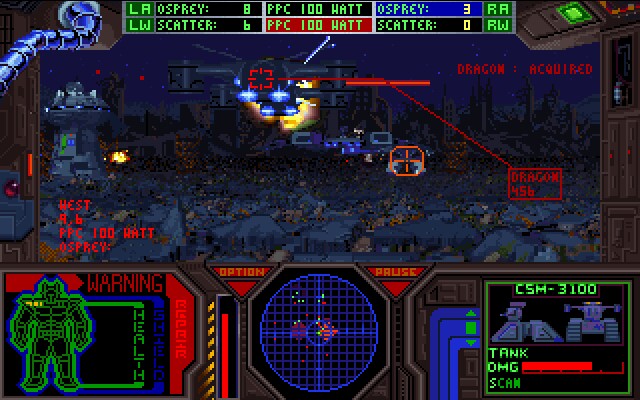 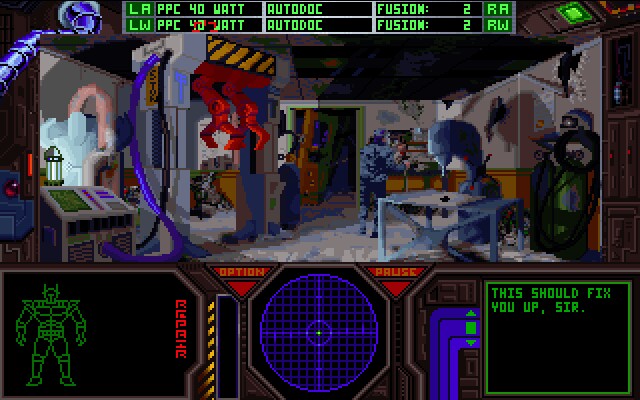