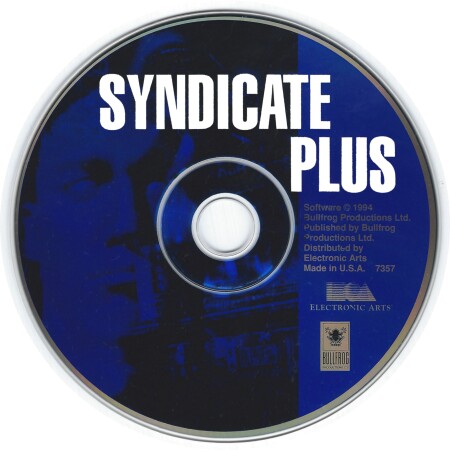 The Game
The year is 2096. After decades of multinational corporate growth, the world is violently split between several massive corporations known as Megacorps. You are a young executive of a small European Syndicate, a Megacorp Marketing Director, looking to spread your control over neighboring territories.

Thanks to the European Megacorp's discovery of the CHIP, a brain stem stimulator that can alter perceptions and render the CHIP recipient vulnerable to auto-suggestion, you have teams of custom cyborg agents ready to do your bidding throughout Syndicate territories. Your mission is to spread your influence across the world by succeeding in strategic missions with your cyborg servants.

The result is a striking action game with a bit of strategy (and gratuitous bloodshed) that can keep you occupied with missions occurring in 50 detailed cities across the globe.

Before each mission you are presented with a world map which displays the territory that you have successfully occupied and the zones neighboring yours that are available for possible takeover (following a successful mission). You choose the tax rates to impose on each territory, keeping a careful eye on the status of each country or syndicate border. Zones start out 'very happy' at your new Syndicate rule, but too high a taxation rate can cause the zone to lapse into civil rebellion. This requires you to fight the mission over again (and spend valuable Syndicate funds better used for further conquest) to quell the insubordination.

Immediately before each mission begins you can choose research interests to pursue. Your cyborg teams can initially be equipped with basic enhancements such as more durable arms or eyes. Further research (at a cost) yields more durable and effective components. Weapons and equipment are initially limited to items such as pistols or shotguns, but diverting taxation income to further research can yield more advanced items such as Gauss guns or flame throwers. Need that laser rifle for an upcoming assassination mission quickly? Just raise the research rate from 10 to 5 days, doubling the cost for development. You can weigh budget and time considerations and devote huge sums of money for quicker weapons or mods (body part modifications) development.

Prior to each mission beginning you can also pay for enhanced mission data or higher-resolution maps to increase your likelihood of mission success. Finally, you equip between 1 to 4 cyborg Company Agents with equipment and mods suitable for the mission of your choice and your funds, and you're off into the combat mode of the game.

You maneuver your agents through each city to accomplish a specific goal such as politically-motivated assassination, combat sweeps to purge foreign Syndicate influences from a city, or retrieval operations requiring the

While most of the missions can be successful via brute force and enough heavy (and expensive) weapons, others are protection missions where reaction time and quick perception over a large region of city blocks are necessary, or they have some subtlety that isn't apparent until you've played the mission once. Weapon and equipment selection before each mission has ultimate consequences for each city--you don't want your agents to be surrounded by foreign cyborg agents with only one half-loaded uzi left. Strategic movement through each city is also very important. Caught in some cross-fire between a police tank and syndicate snipers? Just duck into a neighboring building or alleyway to recuperate or ready your flamethrowers. Finished with wiping out syndicate influences in one sector of a city? Jump on a transit train or a pod car to make your way to remaining agents in another quadrant, or ramp up adrenaline levels and sprint your agents at almost hovercar speed.

The eight agents you start out with are fully unmodified. You can add on any mods you have researched, or use any enhanced agents that can manage to

Syndicate will keep you on the edge of your seat. However, here is a word of warning: Unless you have the relentless energy of your average 10 year old do not try to play the final mission late at night! The required adrenaline overload will make it impossible for you to sleep after your hard-earned victory!

You controlled the world. In Syndicate, you ruthlessly guided your cyborg agents and oversaw your company's funds and arsenal to succeed against bloody civilian uprisings and police resistance, and you accomplished political assassinations, abductions, and rescues. You managed to grind every competing syndicate in the world under your heel, basking in the control of (and taxes from) every nation on the globe.

In Syndicate: American Revolt, the situation has changed. The North and South American populations have revolted to form a strong, almost impervious defense against you, the syndicate that once ruled them. Novice syndicate executives, take heed: you'll need skill, patience, a well-managed bank account, and a fist of iron to re-subjugate the American upstarts.

The American Revolt add-on data disk creates 21 new missions in the familiar terrain and cityscapes that players may recognize from the original Syndicate game. What has changed are the objectives, the enemy skill, and a few weapons. The new weapons Clone Shield (which holographically cloaks your agents in civilian appearance) and Air Strike Com (which calls in a devastating wave of airstrike bombers for a stiff $50,000 fee) raise the game's difficulty. It's harder to minigun your way through squads of enemy agents while they're calling large-scale bombs down on your agents' heads.

The missions, I'm happy to say, are very difficult. One disappointment of mine with the original Syndicate was that a fully-modified level 3 team of agents could bulldoze through almost any original Syndicate mission with several miniguns and an occasional gauss gun. Brute force alone won't get you through American Revolt. During many of my first runs through AR missions, I ended up slack-jawed and a bit dazed as I watched my entire team of agents slaughtered in 10 seconds or less. The infamous Atlantic Accelerator mission from Syndicate is a good example of the sort of consistant difficulty of many American Revolt missions, where brute force combined with tactical movement through sectors, attentive weapon selection, and quick reaction time were equally necessary. (Interestingly, the Atlantic Accelerator mission is included in American Revolt, but with defense as the objective instead of the takeover of the complex. Watch out: it gets hard to dodge airstrikes when your agent is stranded on a 10 foot square guard platform.)

The subject matter of most American Revolt missions is the same as in Syndicate: assassination, rescue, scourges of enemy agents or guard squads. Your opponents, however, are vastly more well-prepared than in Syndicate. Expect a particularly aggressive enemy agent with a minigun to nearly be able to mow down your entire level-3-modified group within seconds if you're too inattentive or sluggish. Many American Revolt missions also have a notable absence of civilians, frequently preventing widespread use of a persuadertron to subjugate an entire city without bloodshed. Several of the missions that do have civilians have just barely enough civilians to manage persuadertron use against agents and guards, leaving a nice tactical choice between attacking agents and the difficult job of protecting every one of the civs from gunfire. Both the enemy difficulty and frequent lack of civilians make most of the missions considerably more difficult than the original missions. 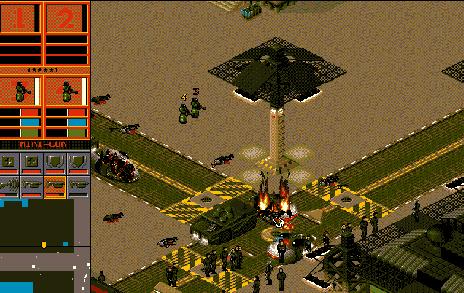 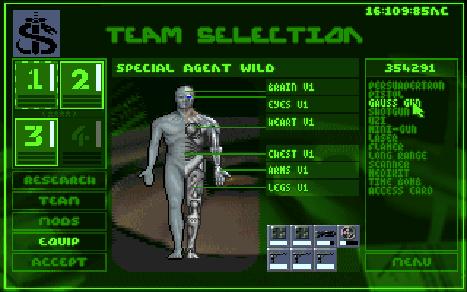