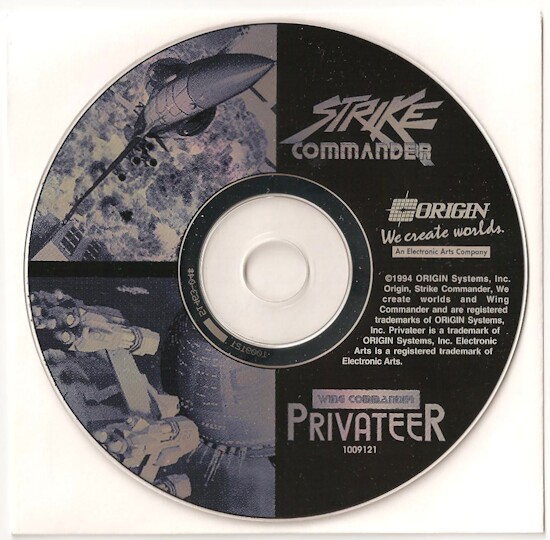 The Game
Origin was known for pushing the technology envelope instead of following the rest of the pack, and they did it yet again with Strike Commander. Wing Commander sold a lot of 386 systems when it was introduced and made a lot of 286 owners very angry until they upgraded and appreciated the milestone. The same held true for Strike Commander: It was the first game that required a 486.

Wing Commander revolutionized gaming graphics technology on PCs but it drove the population into two firmly divided camps: those who preferred bitmaps and those who preferred polygon graphics in their flight sims. The trouble with bitmaps was that they would jerk from one angle to another causing alignment difficulties (especially with large ships) and became rather blocky when viewed close-up. Polygons, on the other hand, were drab and boring, no matter how many of them you slapped together into one object.

Strike Commander changed this. Origin successfully fused polygons and bitmaps into one glorious whole, a TRUE texture-mapped world that can look lovely and obey basic laws of physics and geometry at the same time.

The best way to appreciate the technology is to go into "View Objects" from the main menu of Strike Commander, after the animated intro which is actually quite nice. It is a pretty standard engagement with two F-16's against a MiG with some nice music and speech and very smooth animation. But the "View Objects" menu shows you that this is not just another flight sim behind a pretty intro. The objects look like they were bitmapped and scanned in, yet they rotate with the smoothness of polygon animation. How was this possible gamers asked?

Here's how: A standard polygon F-16 is rendered much like Falcon 3.0 (you can see this in the dialogue box as you set the detail level) With a click you can add gourad shading. This uses various shades of the same colour added on in thin lines, the net effect of which is to smooth the polygon edges into curves. It really fools the eye. But it doesn't end there. With another click, you add Texture, and therein lies the magic. The textures are added on like decals; the camouflage paint is the most obvious effect, but the details are many, including a see-through cockpit with a little pilot inside, all the standard markings you'd expect to see on a military jet (numbers, logo, etc) and even little bullet holes that you may have inflicted yourself.

GAMEPLAY
Strike Commander used a realistic flight model. The planes, do not merely like bricks in any direction you point it. It performs differently at different altitudes; you can stall when you try and perform the Su-27 "cobra" maneuver in your trusty F-16. Even air-to ground missiles, when dumbfired, will miss the target they were aimed directly at, obeying the laws of gravity and falling in a parabola. Another neat thing: the sun blind spot (which you can turn off is a REAL blind spot; if you fly straight into the sun you will soon lose the ability to see anything.

Strike Commander introduced the virtual cockpit where the joystick becomes like your head: move it around and the view changes exactly like it would if it was your head that was moving.

THE MISSIONS
The game starts with a fairly simple mission and gives you a chance to play around with the intermission scenes. You click on an empty bunk or cot (depending on which base you are staying at) to save a game and click on the other, occupied one to load a game. When you move the mouse over the person on the cot he or she smoothly wakes up and turns to look at you. In fact, all of the characters in the game act this way to your mouse probings. This makes for a nice effect. You can click on people to talk to them, but the conversations are already scripted for you. This I found disappointing, but you DO get far greater control over the plot later in the game.

THE PLOT
The game is set in 2011, after economic collapse and disaster in the United States and around the world. Hmm, where does the fantasy end and reality begin? In any case, most of the states have declared themselves independant and Quebec is also at war with the rest of Canada. You, as an ex-military fighter jock, find yourself playing the role of mercenary in a squadron called Stern's Wildcats (There's Chris Roberts and his kitty names again) based in Istanbul.

You find out very early on that this is not an easy assignment. It is difficult to tell your friends from your enemies and despite Stern's attempts to take only the missions that have some sort of ethical payback (relief efforts and such) the squadron is divided over whether morals should take precedence over the bottom line. It's hard to imagine any military unit paying for itself, but these mercenaries must constantly struggle against red ink as they take huge paybacks from petty dictators around the world and shell out large amounts of cash for weapons and plane replacement. Neither the squadron's chief engineer or the accountant are particularly happy people. The base itself is a run-down rathole that even has to suffer the occasional attack.

Life is hard and many people end up being buried in shallow graves in a foreign country, but instead of a clear objective to reach for (as in the end of World War II or the collapse of the Kilrathi empire) it seems almost an inexhaustable conflict, with the players changing every few weeks. Here's where I start to get a bit depressed, especially after watching the evening news and seeing what is going on in Bosnia and other troublespots in the world. Maybe as the plot continues there will be some end goal to reach for (in fact I am sure of it) but at the moment it is just more pointless killing, and even though pointless killing is the sort of thing I LIKE to have in a computer game, it is too realistic here to be enjoyable all of the time. I noticed this towards the end of Wing Commander II, too. When the CHARACTERS start getting tired of fighting, this translates rather quickly to the player. But how can you stay away from those gorgeous graphics and sounds (and explosions)...

But when you unexpectedly have to take command of the squadron yourself, things get very tough. You have much more to worry about that just yourself. Forget equipping your plane, you have to also replenish the base's stock of armanents and keep track of expenses! As if I didn't have to worry about money in the real world, now here's a chance to play with some high stakes and throw away a million or two while watching the accountant sweat. Then you will be expected to choose missions (usually only three are offered to you) on the basis of payback and difficulty level, which you must determine for yourself after a brief conversation with the shady types in Selim's bar in Istanbul. You also get to choose who your wingman will be, which may prove useful in the more difficult missions. I can't wait to have to decide who to chew out and who to praise. 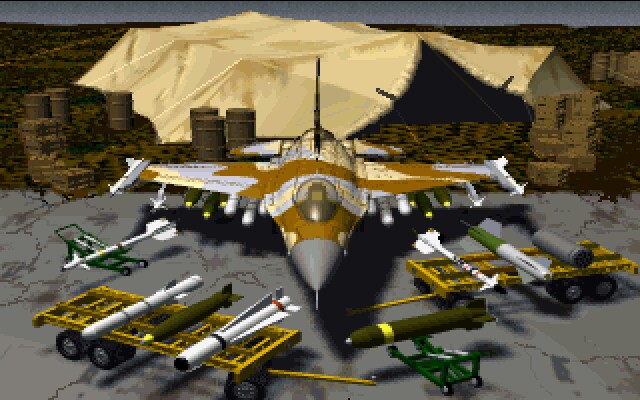 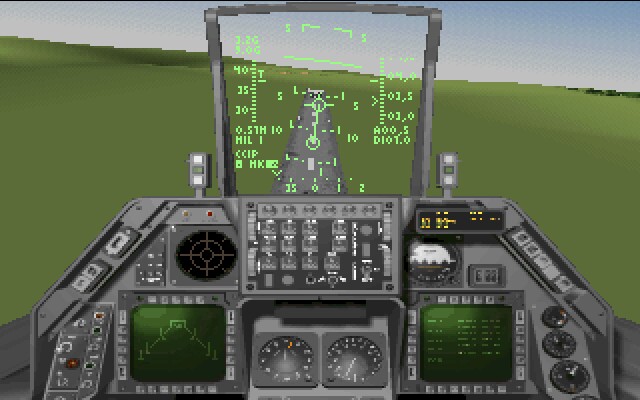