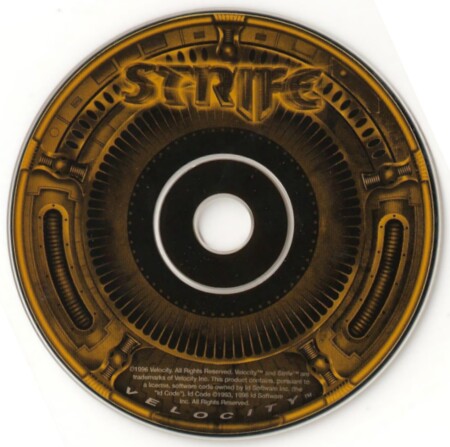 The Game
What makes Strife different from every other first person shooter of its time is it's mixture of a game where you shoot everything that moves, and a game where you actually have a role to play. Unlike games such as Doom you here have to think before you shoot. Such as in the start you can't just go around and gib every guy you see, friend or foe, it will almost every time set off the alarm.

The story tells that in medieval ages a comet struck the planet, really big comet. To make matters worse it brought with it a plague, a plague powerful enough to kill millions. And so it did. Not everyone died though, those who died were the lucky ones. Some of those who survived became human mutations, mutations that formed a grand council named The Order. By the side of The Order were it's patriots, having survived a plague that horrible many joined up to help The Order do what they wanted. And what The Order wanted, was domination. Not all of those who survived went to help The Order though, actually some saw through the plan of the order and became rebels. Not being especially armed the rebels had a tough task, but with powerful leaders, strong soldiers, and alot of hope they actually could have a shot at taking down the order and perhaps making some kind of a place for people to live in harmony, not under the ruling of mutants, and not being treated as servants. Thats where you get in. If you play your cards right you should gain your trust with the rebels, and by completing the tasks they give you, your powers will increase. If you're a lamer though, you have the ability to kill both friends and foes, so if you'd like to make things really farked for yourself you can go on a hunt for blood, the only bummer is that you will be killed, and it will happen fast.

For RPG fanatics I'm afraid you will not find a lot of rpg-like elements, but considering this is a game in first person, where you carry guns, it does not have a bad rpg element either. I suppose Strife was meant for gamers who like both genres, and if you do, then you should give this game a try.

Based on the Heretic engine this game has actually fairly decent 90s graphics. The levels are mostly well made, with buildings that look medieval, which is good. The friends and foes do look very similar, often just differentiated by color of the shirt etc. Your friends do look different than your enemies, but your friends all look the same, and so do each type of the enemy. One bad thing though, you will experience the texture caused headache syndrome a bit out on the game, as the halls get small and the textures look very much the same.

All the important characters will speak to you during the course of the game. You will see a large picture of him/her on your right side, and choices of what to say in the bottom. Unlike many other games the heroes sound like heroes, and the peasants sound like peasants. The weapons sound like weapons usually do in games, as it's probably a bit tough making sounds like for example a lightning-emitting crossbow would make.

Since this game uses the Heretic graphic engine it has also taken with it it's controls, so you can use keyboard + mouse, only keyboard, or joystick. All in all Strife is a good shoot em up romp. 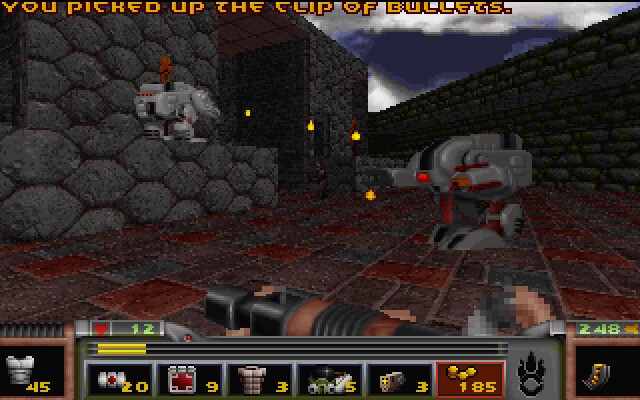 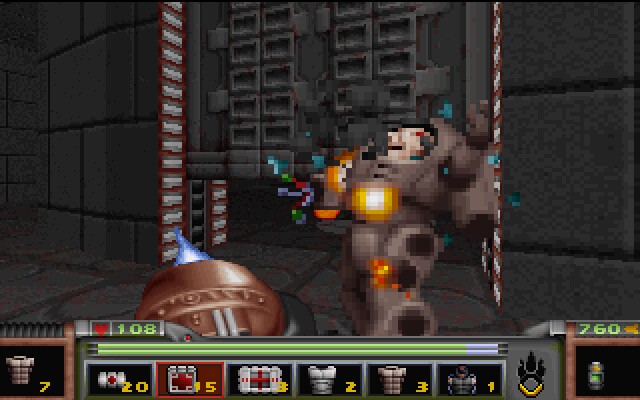