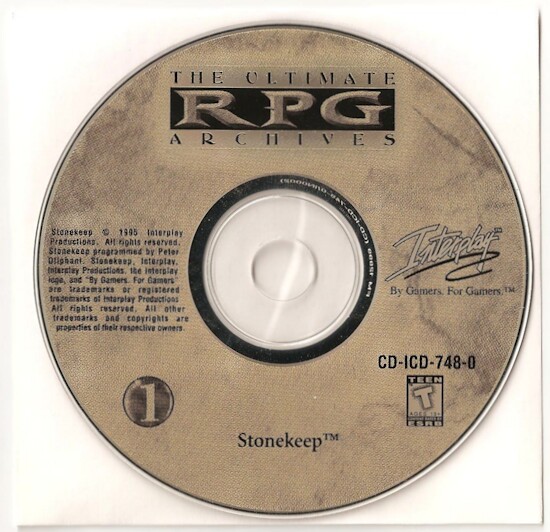 The Game
It's a pleasant sunny day at Castle Stonekeep. Live actors are happily going about their business in the opening cinematic sequence. You, as a boy, are playing with your dog in one of the lofty upper chambers. Suddenly, the sky darkens, the music turns ominous, and a huge evil figure appears. Terrified actors become instant skeletons. You're just a helpless little kid, and the bad guy kills your dog! A mysterious cloaked figure whisks you away at the last moment, as the castle is shoved down into a pit.

Flash. It's ten years later, and you're back. Too bad you do not have any apparent plan of action. The goddess Thera appears to you, as a rather confused looking young man named Drake, and offers to disembody your spirit, so you can re-enter the castle. Here the plot twists: The evil god Khull-Khuum has beseiged and captured the other gods, and has destroyed Stonekeep because, you, their prophesied savior lived there. In your disembodied form (though still quite physical and distressingly easy to kill), you must search the castle for clues on what to do next.

Character Generation
Advancement is through a rather minimalist statistics-and skill-based system, similar to that in Dungeon Master II. All improve through use. Your basic stats are Strength, Agility, and Health, which can increase over time to a maximum value of 10. Skills include Archery, Axe, Brawl, Dagger, Hammer, Polearm, Sword, Defense, Stealth, and Magic, which can improve to a maximum value of 5. Improvements occur automatically, when you have practiced something enough.

Sound and Vision
The music is good, and the sound effects are excellent. Each level has its own atmosphere, which is unobtrusive but effective. The music alters appropriately during combat. The quality, on my wavetable card, was great. Similarly, the sound effects are probably the best I have heard. Everything had a clear source, indicating both distance and direction. Footsteps echoed, critters slithered and crawled, fires crackled, and unidentified sounds ahead really made me worry.

The live actors who portrayed NPC's blended into the environment better than you might think possible. (It's normally something of a shock to see a real person against a computer generated background.) Opponents' movement during combat was realistic, and magic effects were impressive but believable.

Gameplay
Like Dungeon Master, Stonekeep employs a first person perspective and discrete stepping movement in only the four cardinal directions. You can move forewards, move backwards, and turn 90 degrees, but (unlike Dungeon Master) cannot slide sideways. The frame rate has been carefully controlled so that movement will feel the same on a low end Pentium as it does on a modern screamer.

Within these restrictions, the designers have concentrated on minimizing distractions to gameplay. Normally, your world view covers the entire screen. Inventory and other information screens are hidden popups that only appear when you request them. Also, real world requirements such as food, water, light, and sleep have been stripped away. Movement is controlled through the keyboard, while item manipulation and combat is performed with the mouse. Keeping with the style, inventory is kept in a 'magic scroll', which can hold an unlimited number of items. Items of similar type can be grouped together.

Stonekeep has an automap, and it is quite good. It clearly shows where you have been, with no confusion. Walls and pits are clearly marked, as is your current location, and it is easy to see what still needs to be explored. As often seems to be the case, there is an easy (and undocumented) way of discovering your current X and Y coordinates - Shift-F8. You can also write notes on the map. With this setup exploring is an easy matter, given the automap and a built-in compass that can be displayed.

Combat
Combat occurs in real time, but is quite easy to master. You can carry items in both hands, and clicking the corresponding mouse button causes that item (sword, runestaff, shield, etc.) to be used. Recovery time depends upon Drake's agility and weapon skill, not on your personal dexterity with the mouse. You can also fool around with your inventory, and combat is suspended while you do so.

NPC's in your party will fight along side you, but you do not control their actions. This is a sensible arrangement, since directing multiple characters in real time inevitably degenerates into frantic mouse thumping. My only objection was a certain NPC's over-zealous use of fireballs. Firing them at point blank range was not good for my party's health...but I guess he meant well.

Is combat fun? In a word, yes! First of all, there are no monster generators (with a couple of reasonable exceptions). There are no mind-numbing waves of identical foes to mow down, so each encounter can be savored individually. Furthermore, Interplay took the time and effort to give many of your opponents separate personalities, as well as separate tactics. I saw different ones do each of the following: Charge into melee combat; stand back and throw missiles before charging; fight until hurt badly and then run away to heal themselves with potions; munch on healing herbs while fighting; just cower in a corner. Some would also talk among themselves, from the brave ("Let's get them!") to the indecisive ("Jump them, Boys!!...Boys?") to the cowardly ("Where'd you guys go?"). One of them even soiled his armor, to borrow a phrase from Monty Python. They actually made me feel guilty at times, as I pillaged and murdered my way along.

Spells
To cast a spell you must (a) have read scrolls containing the runes for the spell and (b) be holding a runestaff on which you have inscribed the runes. (The graphics when inscribing the runes are quite good.) Depending upon the amount of mana stored in the runestaff (and your magic skill) you are then free to blast away. The special effects are great - it was most satisfying to unload a full runestaff's worth of triple-powered, area enhanced fireballs. Then, of course, I had to hurry on back to a mana circle to recharge the staff.

The magic system is well balanced for most of the game, since you can only carry so much mana at one time, and offensive spells at close range are a bad idea. Later on, the invisibility and translocate spells make you a little too powerful, but by then you are probably more interested in finishing than fighting anyhow.

What separates Stonekeep from other games is the way Interplay developed the characters you meet. Each NPC is portrayed by a live actor, and has spoken dialog. This extends to many of your combat opponents as well. The acting is all professional, and well done. Each character is memorable, and quite distinct. You will, for instance, have to explore the Faerie Realm. The faeries are the most sickeningly, disgustingly cute characters I have ever seen in a game, and the actors must have had a ball playing them. Whatever you do, make sure that Karzak is in your party before entering the Faerie Realm. His pained opinions about faeries are hilarious. 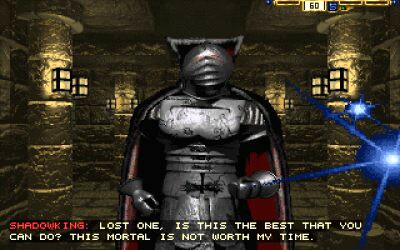 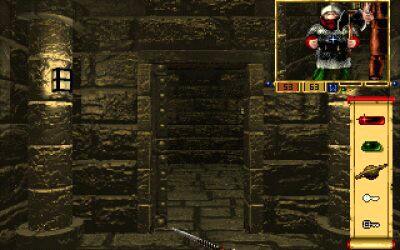 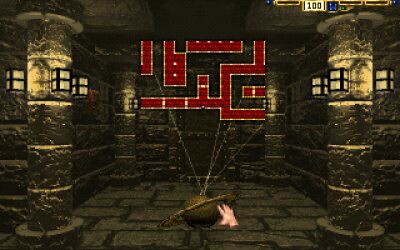