The Game
You are sitting at home, enjoying yourself and just having a good time when suddenly, out of the blue, a giant spaceship smashes into your house, effectively reducing it to a pile of rubble. A door opens, and a seemingly nice robot walks out and offers you a complimentary cruise on the Starship Titanic. Once aboard, you realize that this starship apparently disappeared without a trace on the eve of its maiden voyage.

Aside from all the damage it did to your house, all the commotion it caused on its home planet of Blerountis, and all of the damage to the paintwork, someone has also planted a bomb onboard--complete with an activation button that states "Press to disarm"! Now, you hold the daunting task of fixing up this broken ship and reassembling the pieces of Titania, the ship's artificial intelligence. Only when you complete this task shall you find your way home.

Tidbits
It is rumored that the Starship Titanic is the same starship featured in The Hitchhiker's Guide to the Galaxy, hence a tie-in between these two games. Also, Adams also does the voiceover for the robot Succ-u-bus. The voice of the reluctant bomb is that of John Cleese (Monty Python), although the credit is given to a pseudo-name "Kim Bread."

Starship Titanic is written by Douglas Adams, who is best known for his work The Hitchhiker's Guide to the Galaxy. The production value of this game is impressive. The graphics are sharp and all are drawn on top of ray traced backgrounds. The over half a dozen beautifully animated robots called Bots show off the artistic prowess of the production artists. In addition, this game features something you don't often see in today's games--a fully functional text parser! Each character is completely interactive. You are able to have meaningful (or not) conversation with the robots by using natural language through a little device called PET or Personal Electronic Thingy. Each character has over 10,000 prerecorded lines of dialogue, marking an incredible feat all in its own. When was the last time you had a conversation about the three main causes of the great Blerountin war with a walking lampshade?

The entire starship is a joy to explore. Navigation is frame based, but every step you take is shown with extremely fast pre-rendered walking animation. The sound is terrific with lots of sound effects, along with some great music in between. Some of the music can be truly tacky at times (not in a bad way though), but those are few and far between and mostly intentional. Comedic elements in the satiric style of Monty Python are evident throughout. Terry Jones of Monty Python fame is featured as the voice of the annoying Parrot!

According to the game, the interior of the starship is boldly advertised to resemble "a mixture of the Ritz, the Chrylser building, Tutankhamen's tomb and Vencie." It is designed by the Oscar winning design team of Oscar Chichoni and Isabel Molina.

The gameplay is simply fun. The puzzles are mostly inventory based, but a good dose of other types of puzzles are also thrown in. The only major problem is that some puzzles can be extremely illogical. For example, one puzzle requires you to grab a parrot perch from a cage; but when you grab the parrot, the door shuts and locks itself, denying you access. I can only imagine that Mr. Spock would have a field day with the Parrot alone!

Many puzzles require you to talk to the various robots that inhabit the ship, such as Fentible the forgetful DoorBot, Nobby the war veteran LiftBot, and Krage the BellBot with a lampshade for a head. Interaction with the Bots can be fun or frustrating, as these Bots do not always respond back with anything legible or enlightening. Conversations with some characters, such as the annoying Parrot (complete with its own parrot lobby) and the snotty ReaLife® Superior Class DeskBot, can be a challenge.

The interface is easy to use, employing the same point and click interface that most adventure games do today. Some puzzles can be frustrating, but you can never get completely stuck. A few clever puzzles are, in fact, very enjoyable. One puzzle prompts you to locate the ingredients for a drink for the BarBot that requires a smashed television set and a few pureed birds in the process. Also, there are a few full-motion video sequences which feature Adams himself. There are more than thirty decks on the starship, all of which are open to exploration. You can inspect each and every one of those rooms. There are a few sound based puzzles, but they are not too hard even for those who are acoustically challenged.

As you upgrade from third to second to first class passenger status, more of the starship will be open for exploration. The Bots featured include Edmund Lucy Fentible the DoorBot, Fortillian Bantoburn O'Perfluous the BarBot, Marsinta Drewbish the DeskBot, Shorbut Sweet the Succ-U-Bus, Nobby the LiftBot, Krage Koyotoal IV the BellBot, and D'Astragar "D'Astragaaar" the Maitre d'Bot. Apparently, these robots are infused with personalities purchased and scanned at enormous expense by Starlight Lines for their exclusive new collection of Bots with Genuine People Personalities.

This game is a must for fans of Adams and Monty Python. The graphics are great, and its refreshing gameplay creates a fun and enticing game. The puzzles are entertaining, but not too hard. The countless lines of dialogue are all well acted, with both Adams and Jones doing their parts with flare. Summary
Starship Titanic is definitely a fun game that makes you laugh. The graphics are superb, and the opportunity to interact with a flexible text parser alone is enough incentive to try this game out. Just be quick to solve the puzzles before that incessant Parrot drives you over the edge. 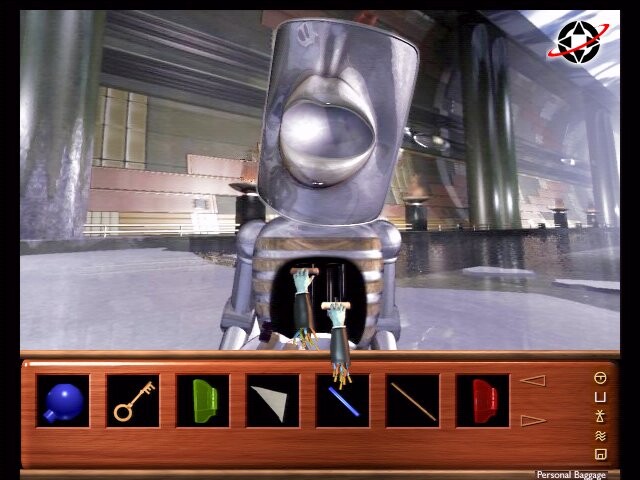 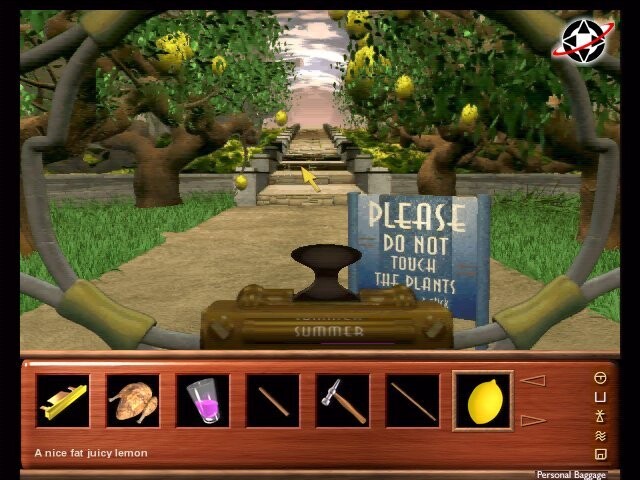