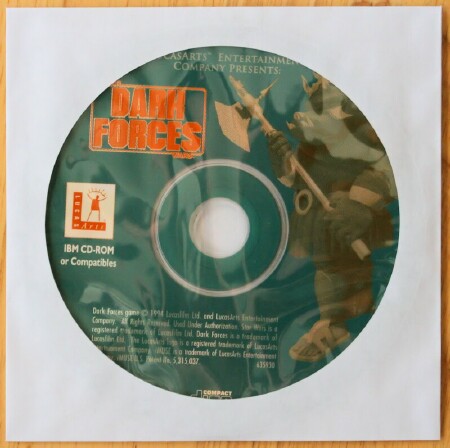 The Game
Dark Forces was the first game to use LucasArt's second-generation 3D gaming engine, Jedi. It was easily as effective as the Doom's engine and brought better graphics and a greater level of movement freedom.

In Dark Forces, you play the role of a rebel who is given a series of missions to complete. A total of 14 missions are included in the game, but unlike the competitors where levels can be finished in a short period of time, Forces has the most intricate levels ever designed for this type of game. They are really huge and when you think you have finally reached your objective you find new rooms to explore.

The game has a sprawling feel with many different types from big open air places to small caves behind water falls. Stairs, moving platforms, elevators, rivers and conveyor belts are small parts of what you will discover in Dark Forces. Each level was created with its own textures depending on where your mission is located. For example, you will visit a mine, a factory or even a detention center all located on various planets in the galaxy. Each mission has one or several goals, as we said above, and it gives the game an adventure side never found in other games of this type. You have a limited number of lives in the beginning, and you must keep it above zero to complete the game. Fortunately, in some hidden locations throughout the game, you will find some extra lives to help you.

What is also going to help you a lot are weapons. Nine different weapons can be used in Dark Forces ranging from the Modified Bryar Pistol to the Stouker Concussion Rifle leaving you with only your hands when your ammo level reaches zero. Your shield is also an important part of your combat suit as it protects you against laser hits and explosions. Therefore, you better have a look at it before it drops to zero and recharge it by getting shield units when you find them. However, there is a Super Shield option that gives you a limited invulnerability. It is limited only because some creatures will still be able to harm you through your shield such as the monsters found in the sewage system.

Your enemies in Dark Forces are numerous and varied. The first ones are from the imperial troops with the famous Stormtroopers, the Imperial Officers and the Imperial Commandos. They are usually easy to kill, but this is not the case for such creatures as the Gamorrean guards or Boba Fett, the legendary bounty hunter. Other enemies you may fight are probe droids, interrogation droids or the very fast remotes. A total of twelve different enemies are included in Dark Forces to offer the player a real challenge.

Some missions require special items to help you in completing your task. Among these items, one of the most important is the air mask that will protect you against dangerous chemicals by filtrating contaminated air. If you want to move easily on ice, try to find a pair of ice cleats. The other objects you can discover are the infra-red goggles, the batteries and keys which will open doors corresponding to their respective color. Your head lamp as well as the infra-red goggles need batteries to work properly and if you do not want to be blind when darkness is all around you, you must collect batteries wherever you can find some.

Dark Forces is one of the classics that never gets old. The graphics are good, the music is the typical Star Wars theme, the weapons are cool and the enemies are well made (but there could have been a few more of them). The challenge level is good and the levels are well made and logical. A true legend. 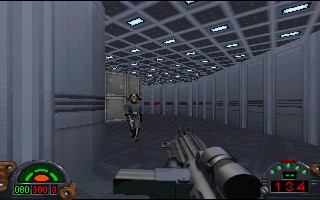 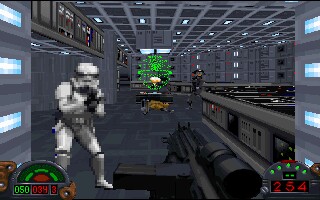 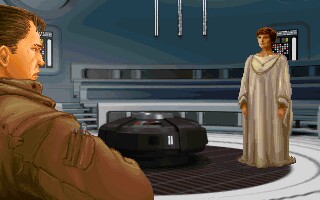