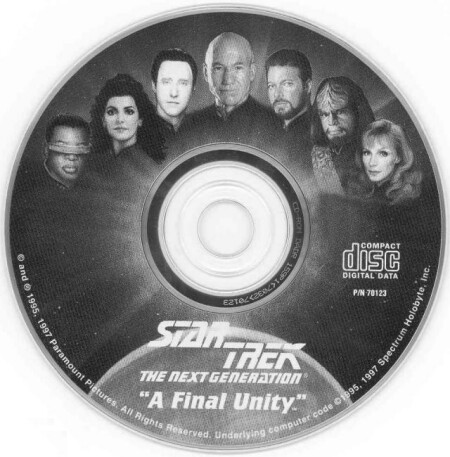 
In 1995 Spectrum Holobyte did a remarkable job of making a distinctive, enjoyable, and even deep adventure from the exploits of Picard and company. With top notch voice acting, multiple narrative paths, various difficulty settings, challenging puzzles, and gorgeous graphics, Star Trek: The Next Generation "A Final Unity" is definitely a game that Star Trek fans can come back to again and again.

The story behind Star Trek: The Next Generation "A Final Unity" is subtle and sweeping, bringing in many of the elements that make Star Trek: Judgment Rites such a joy to play. The game opens in the exact fashion as an episode of Star Trek: The Next Generation on television (a small touch that makes the game even more immersing). The story begins as the Enterprise finds itself pulled into a dispute between a group of Garidian (friends of the Romulans) political convicts asking for asylum from the Federation and a Garidian warship that is in pursuit.

Playing out in an episodic format, the story initially unfolds in the form of several mini-adventures which run the gamut from saving a damaged space station to solving a whodunit mystery on a nature preserve planet. However, the game soon turns into a larger, movie like extravaganza as it becomes apparent to Picard and his crew that big trouble is afoot in the galaxy. A race against time begins between the Federation, the Romulans, and the Chodak which is an ancient and once powerful race that has ruled the galaxy almost a million years ago but is now thought to be dead. These political powers are trying to locate an ancient artifact of great power known as the Unity Device. It is up to the Starship Enterprise to determine the secret of this device and prevent it from falling into the wrong hands. Whoever wins this race may be the one to determine the evolution of the galaxy for the next million years.

The production values of this game are top notch for its time. The film clips are impressive, and a "Holodeck" feature inside the game allows you to watch cut scenes again and again to your heart's content. The graphics are well drawn, including all the main characters from Star Trek: The Next Generation that have been rendered in almost perfect fidelity compared with their real life counterparts. Ironically, the only real problem is that there are so much details in many of the background scenes that it is difficult to pick out the hotspots on occasions. The voice acting stands out as one of the best voice tracks ever added to computer games. The game features lifelike 3D animation of the Enterprise crew, authentic digitized sound effects and music, and fully digitized voices of the original cast of the series, excluding Denise Crosby and Wil Wheaton. The principal casts include Patrick Stewart, Jonathan Frakes, Brent Spiner, Marina Sirtis, LaVar Burton, Michael Dorn, and Gates McFadden. Over 60 minutes of audio dialogues have been recorded individually with Patrick Stewart, Brent Spiner, and Marina Sirtis.

Mere words do not begin to describe how impressed I am with the entire story behind this game. Epic in its scope, it feels like I am playing through a extremely well written piece of Star Trek fiction. The story is quite long and twisty and keeps you guessing until the last minute. In the end, is this not what a good adventure is supposed to do? The designers have obviously invested the proper time and resources towards developing the story, which in my opinion, has really yet to be topped by any of the other games based on the Star Trek license.

Star Trek: The Next Generation "A Final Unity" is an excellent game that has an interesting story, decent voice acting, and even semi-nonlinear gameplay. Aside from the annoying battle sequences, it is relatively fast paced since hints are offered frequently and freely to prevent novices from getting stuck. Adding multiple narrative paths is a great way to inject replay value to this title. 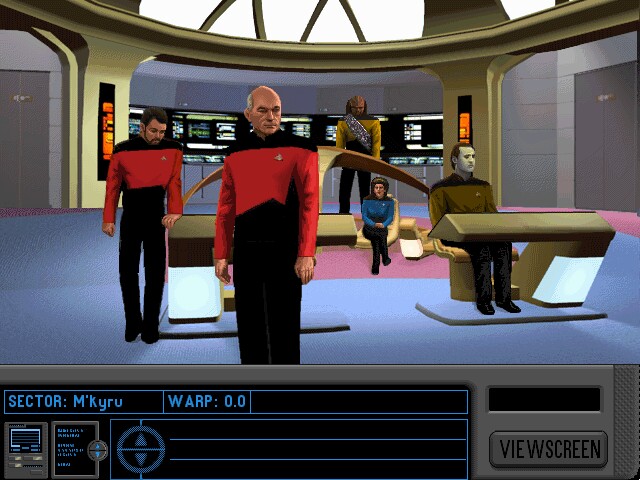 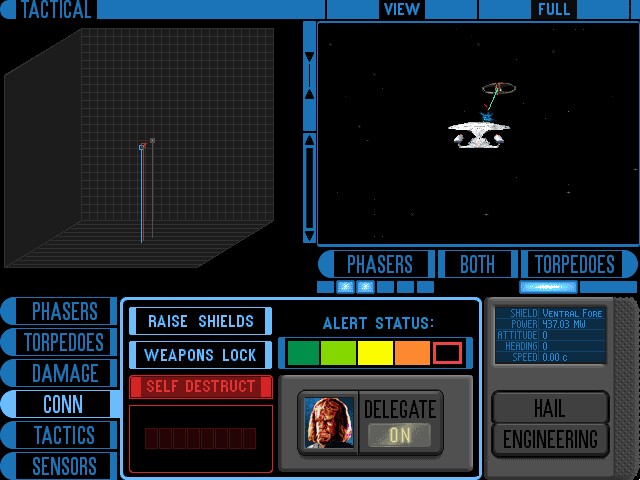