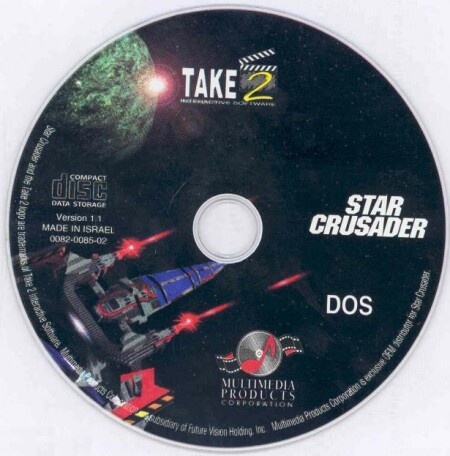 The Game
Star Crusader is a mid 90s space simulation game, where the combat is all that the diehard Elite fans amongst you might have hoped for in Frontier. You'll fly several craft of different types, but all of them are capable of dogfighting, and for me it's never been as good as this. Once you enter into a scrap with a Warlord for example, (very similar to the Starfurys in Babylon 5) and start blasting your way through its shields and demolishing its various systems, as its pilot frantically tries to evade you, you'll realise just what you've been missing. It's great!

Despite my reference to Elite, Star Crusader is actually more similar in it's approach to the game Wing Commander. Like Wing Commander it is a mission based game, where you are a fighter pilot trying to survive and hopefully achieve total victory in a long series of linked missions. One of the major differences though, is that while Wing Commander uses what looks like a scaled sprite system with a rather pixellated effect for it's spacecraft, Star Crusader uses a more conventional polygon approach, which for me looks and feels far better. There is also a greater amount of detail within the game's background story.

In the game you play Roman Alexandria, a highly respected pilot in the elite Gold squadron of the Gorene Empire. Depending on your perspective, the Gorenes are either an enlightened race that have graced the galaxy by generously spreading their wisdom and culture, or arrogant invaders that seek to conquer all and impose their values everywhere. Actually, in the manual, the American design team appear to be taking a little pop at the British Empire, which is fair enough I suppose, but before we get too holier than thou let`s not forget the treatment of the native American, chaps. ....Anyway, the Gorenes have decided to expand, by force if neccesary, into the Ascalon Rift; a vast but little known sector of space, inhabited by several races, that are already at each other's throats.

Despite the might of the Gorenes, they are only lightly established in the sector, and until the construction of the hugely powerful military base, Prajna 7, is completed, they will not have things all their own way.

Initially you are placed the main hall of your base, and offered five degrees of difficulty ranging from Wimp to Impossible Level. When you've decided this you'll be invited to develop your pilot skills in the Simulator, but also accessible are: The Map Room; a display of the Ascalon Rift giving information about the various forces, The Briefing Room; where you attend the pre-flight briefing sessions and can view a sort of audio visual system offering you detailed displays of what you can expect to encounter on your forthcoming mission, and the Pre-mission Computer Room; where as well as finding out about pretty much everything in the game, you can, if you are of sufficient rank, select which pilots fly the current mission with you, whether a secondary mission is undertaken, what type of mission it is, and which pilots will take part in it. This part of the game is quite impressive because with the click of a mouse on a pilot's name, or that of a craft, you can bring up the relevant statistics and attributes, aiding your decision in who flies where and in what. You can even select which pilots you would like to be instructors, and you should choose carefully because their attributes will directly affect those of their students.

But what about the actual 3D and the ships, how do these babies perform? Well, a criticism I have seen levelled at Star Crusader is the degree of difficulty experienced in controlling your ship. The good news is that its not difficult, but there is something a little odd about the control method because no matter how centrally you position the pointer, the ship's course tends to gently drift one way or another. Not drastically, but enough to make you wonder why it has to happen. In combat though, the control is just about perfect, allowing for natural and intuitive control in the hairiest situations.

A particuarly nice feature of the game is that if you successfully disable an enemy craft, you can capture them with your tractor beam, ferry them back to base, and then, if you are of sufficient rank, fly them yourself in later missions. Whatever your rank though, you will have access to the flight simulator, where you'll be able to hone your battle skills and experiment with a range of tactics while coming to no harm.

It's not all blasting though, from time to time you will need to perform stealth missions in the Intruder ship. As unlikely as it may sound these missions actually succeed in capturing some of the atmosphere of the old Microprose game Silent Service. You need to creep about, keeping your speed and detectability down to the minimum, while feverishly hoping that your stealth generator's battery will last long enough for you to perform your mission, and then slip quietly away to safety. The Intruder has some highly specialised features; as well as using it's stealth capability, it can make visual scans in a variety of wavelengths, and it can direct probes at a nearby target allowing you to receive all sorts of useful data. All these functions, including your level of stealth, can be viewed on the monitor systems below the main 3D display. Infact all the craft in the game have these monitors, and while they don't share the Intruder's special features, a wide range of tactical information can be displayed. You can even design and save your monitor configuration (as well as your Power and Repair priorities) in the preference program.

Star Crusader will involve you in it's storyline keeping you interested, and rewarding you with greater demands and new twists in the plot. The end of game sequence is a worthy one and delivers a final twist that is cleverly delivered. 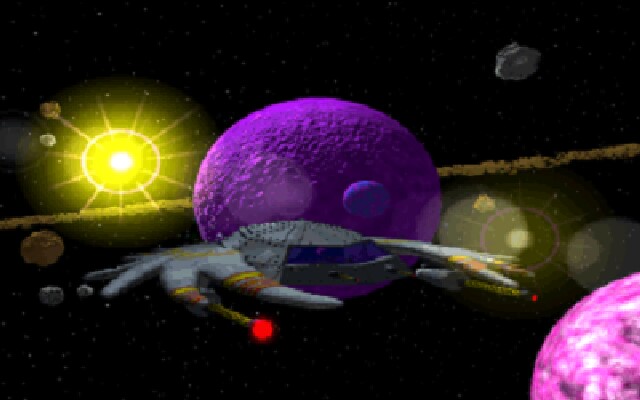 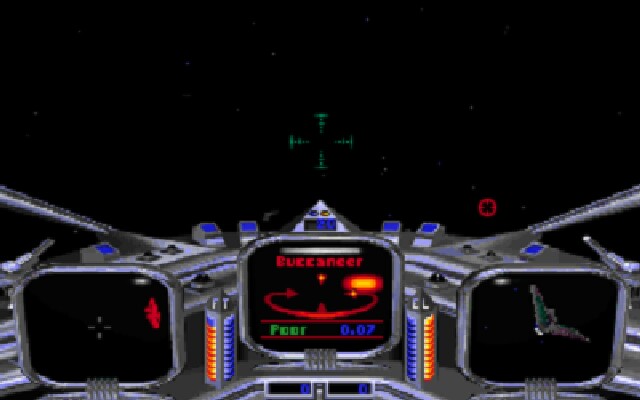