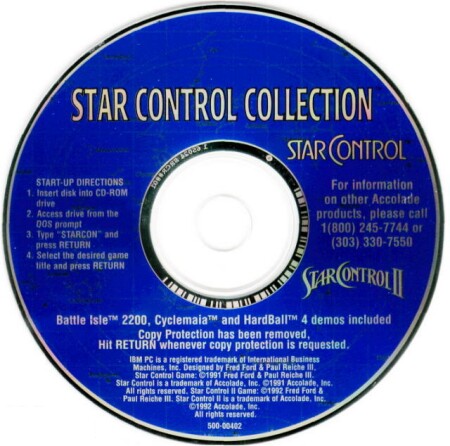 The Games
Star Control I
Star Control is a science-fiction wargame which pits the forces of the Alliance of Free Stars against those of the predatory Ur-Quan Hierarchy. The games are designed so that you can ease into play, familiarizing yourself with menus, options and player controls. The Alliance and Hierarchy each possess different types of warships. Each vessel has its own maneuvering and firing characteristics, plus a unique special power that you can employ when circumstances dictate.

The game has two modules: the Melee, in which you can simply blast the computer or another player to smithereens using one of 16 different ships, in either Hierarchy or Alliance fleets; or, should you wish for a more challenging game, lets you play one of 9 preset scenarios in an original and challenging game scene.

The Ur-Quan Hierarchy - seven alien races welded to form the "evil empire" of the 27th century. Ruthlessly invading interstellar neighbors and slave-bonding the inhabitants. Now humanity is on their shopping list of species. You must join forces with the Alliance of Free Stars to defend the galaxy against the armies of the Ur-Quan. The captains of seven fantastic starfleets await your orders for battle. Who or what controls man's destiny? The answer is in the stars.

One of the reasons for the success of Star Control is the philosophy of game design of the author, Paul Reiche III. Paul freely admits he does not have any highbrow ideas of games as statements of social change. The litmus test of a good game is how much fun it is. Reiche believes that some designers can describe their newest games ad nauseam but never say, "The fun part is.." Consequently any fun in the game is completely accidental. Reiche uses a simple test in rating games, looking for the trait that good designs will always have -- a "fun core" Reiche's goal is to create a game that can have a one-sentence description of why it's fun.

As you might have guessed by reading my ads one of my hobbies is learning about the rich history of computer games. Part of that involves reading every interview with game developers I can find. Fortunately Reiche is a gregarious sort and I have had read several accounts of his exploits and philosophy. One of his favorite methods of creating basic game ideas comes from the games we play in the real world. He picks out the "fun core" of the game. In hide-and-seek, for example, the fun part of being the hider is finding a good place to hide. Then he thinks about how that can translate to a computer game.

Besides looking to the real world for standards of fun, Reiche examines successful games of the past. Star Control was actually inspired by an old 8-bit Atari game called Star Raiders. Seen through the eyes of today's audience Star Raiders may look like a game from the stone age. But the game was great fun back then, and it's still fun today. Reiche believes the classics are overlooked as sources for fundamental game design.

Keeping this target firmly in place can help the development process. Reiche believes there are cases where you design something that looks good on paper and there's only one small part of it that's fun. You have to focus on that and throw the rest away. This attitude has served Reiche's employers well -- he has taken his "fun" seriously enough to build some of the most entertaining diversions ever made.

Star Control II
Star Control II is a cross between Star Control I and Starflight. All the fun of Melee mode has been included along with a few additions. An even better feature, for me at least, is that battles can be fought automatically! I played the entire game without fighting a single battle and had a great time not worrying about my coordination!

The main thrust of Star Control II is space exploration a la Starflight. You will explore a galaxy of hundreds of solar systems as you try to devise a way to free Earth and the former Alliance from its enslavement by the Ur-Quan empire.

Fans of Star Control I will want to dive into SuperMelee mode. This can be played by itself or in the context of the storyline. The mode is almost identical to Star Control I but adds player-defined teams and eleven new ships. You can go head-to-head with another player or take on the AI. The player creates a team of up to 14 ships with a different point value based on it's power, effectiveness, durability and strength. Each ship requires a different playing style and will keep you on your toes. You must consider are crew capacity, turning rate, speed, weapon recharge rate, strength and more. In addition to the usual armaments each ship carries a unique weapon such as tractor beams, shields, cloaking devices, energy-draining drones and more. Be warned -- SuperMelee is not as simple as an arcade game. You must understand you enemy and plan accordingly.

Even though it is very well designed SuperMelee takes only a small part of Star Control II. Instead, the emphasis is on adventure. As one of the only remaining free humans, cut off from the War and the rest of the galaxy these last twenty years, you must discover why the Alliance lost, what has become of your former allies, and what the meaning is behind the things that are going on in the galaxy now.

Much of the adventure and fun will be occur from exploring planets. Planet exploitation is the main source of income for buying fuel, crew, escort vessels and upgrades. Income is generated by searching the planets for minerals and lifeforms. Occasionally planets will also contain other artifacts like ships, cities, and other useful devices.

Back in 1992 the soundrack was such a hit people extracted it from the game itself into standalone music files! The scores are widely varied in style, and suit the aliens to a tee, from the somber Utwig theme to the funky Pkunk music. Nothing even remotely like it existed at the time -- no wonder as it was the first commercial PC game to use four-channel sound.

An actual script was created to showcase the unique alien personalities. Each race has a different tempermant, goals, and language style requiring a specific style of interaction. The script itself, for a graphical computer game, was astoundingly huge and almost on par with an Infocom adventure!

The writing is clearly the product of talented storytellers and balances humor and drama throughout the entire adventure. The humor is best seen in the endgame sequence which runs for over 10 minutes and uses a very original theme: The tale is over so the aliens can stop "acting". The Ur-Quan actor, for example, moans about having to play the badguy every time. He laments, "Why am I always the heavy? All I do is bluster in and threaten. I am a thespian with depth! I can play characters! I'm calling my agent..." Accompanied by the alien's musical theme these appearances are very entertaining.

Star Control II is an all-out A+ effort by Accolade with no weaknesses whatsoever. The graphics, music, plot, interface, AI, and script fit each other perfectly. The result is pure synergy. 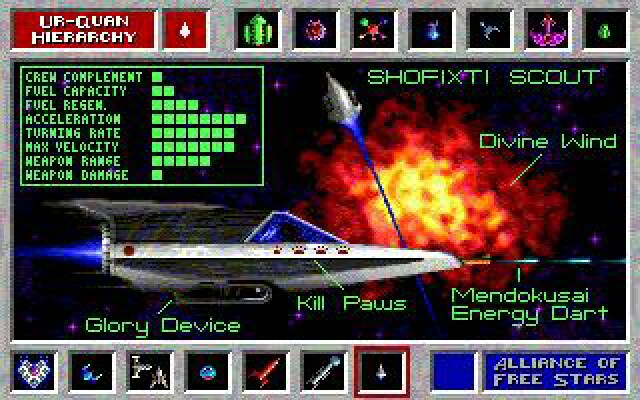 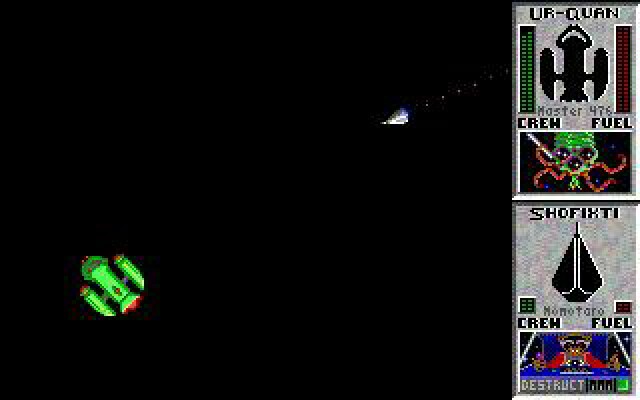 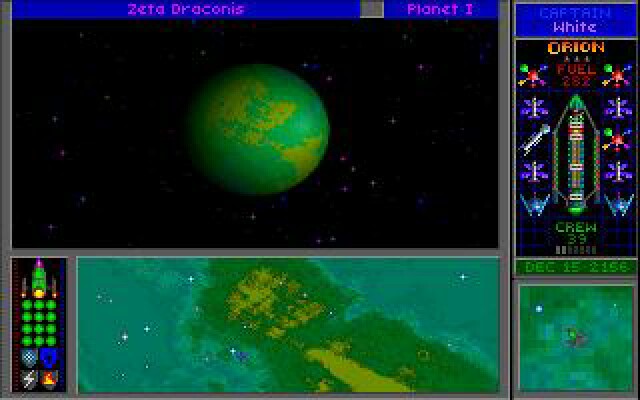 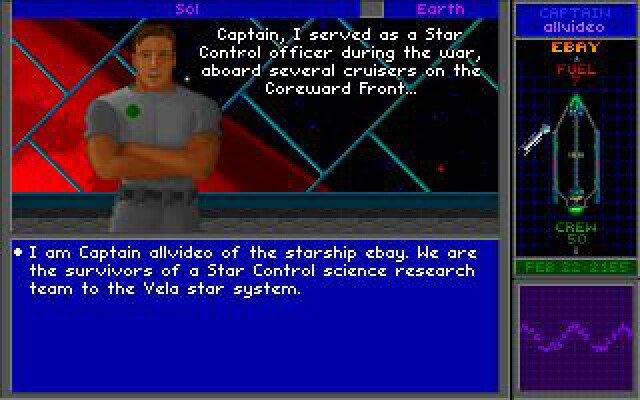