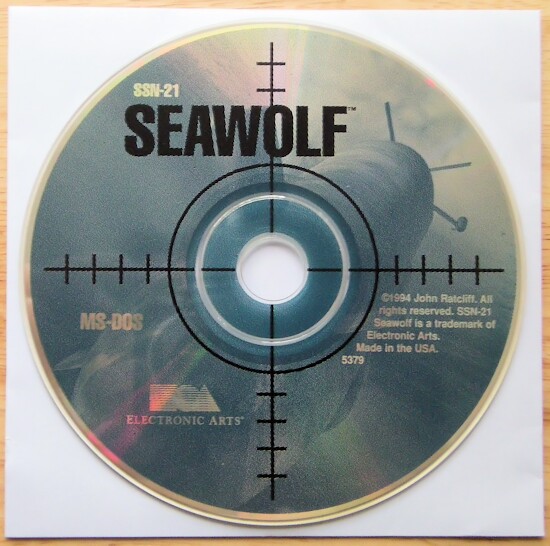 The Game
The background is simple--somehow things in Russia just didn't quite work out, the Soviets are back, and by the way--it's World War III! This may be a simple set up, but it's fairly well fleshed out--each mission is tied to the normal mission outline, a more candid and direct briefing from the Commander-in-Chief, and the latest breaking news stories. You'll get a pretty good idea of what you need to do for each mission, and what's at stake if you should fail. Upon mission success (or failure), you'll be debriefed by the C-in-C (if still alive!) and get a chance to see how your results were reflected in the news.

Once you embark on a mission, you find yourself out in the middle of things, 150 feet under (attack depth--the depth at which you can use missiles to attack surface vessels). Each mission takes place on its own fairly detailed terrain map (all 33 are generated during installation, using the by-now familiar "plasma cloud" method), but you'll find yourself starting out in different locations should you try the same mission more than once. Your first order of business will be to improve your situational awareness, and most likely you'll begin by deploying your towed sonar array, to improve your passive sonar capability. For most missions, caution is the key to survival--begin racing about at flank speed and sending out active pings, and you might as well paint a bulls-eye on your forehead and tape a "Kick Me!" sign to your back.

You'll find at your disposal several situational views. The overhead map display is where you'll find yourself most often, and comes in two varieties, low-res and hi-res. Hi-res only gives you more aesthetically-pleasing detail when you're zoomed in close and near a coastline, otherwise, the two modes are identical in function. You'll see sonar contacts on this map, color-coded according to their identity (friend, foe, or neutral), dimmed if they are old (lost) contacts, or gray if they are as yet unidentified. The manual promises that a legend describing the sonar contact symbology is to be found on Seawolf's "reference card" (actually a pamphlet), but such is not the case. Fortunately, such a legend does appear in the on-line hot-key help in the game, though the symbols will pretty much be simple to decipher without it. You'll also see tracks indicating the "wake" of each vessel on the map, very handy for determining their speed and course, and observing their reaction to your sub's activity.

Sooner or later, someone will want to raise their sub to periscope depth and use their scope to gaze longingly at the sea, sky, and surrounding surface vessels or what's left of them. Seawolf provides a pleasing scope view, though you'll actually find yourself not needing it or using it as often as you would in a WWII sub sim. The rolling sea is beautiful, as are the various skies one will encounter (the sea at sunset, thunderstorms, etc.). The bitmapped ships are decent, though a bit magnified, making everyone seem a bit closer together than they actually are. You will see missile launches and ship explosions as you expect, but after a while, you'll tire of the fact that they're really just the same pre-rendered animations over and over again. You'll be best off sticking to attack depth (150 feet) or below. If you want, you can launch a remote camera that'll bob to the surface and show you a grayscale, continually rotating facsimile of what you'd see through your periscope.

As the captain of a Seawolf-class attack submarine, you've got quite a few weapons at your disposal. You have six missiles, two each of Harpoon, Tomahawk, and Sea Lance classes (the latter useful against subs as well as surface vessels). You have long range torpedoes, high speed torpedoes, wakehoming torpedos, and stasis torpedoes. Unfortunately, the various distinctions between weapons is not documented at all in the game's manual, though they are fairly simple to figure out. Until your torpedoes reach the limits of their guidance cables, you have an impressive amount of control over them--you can direct them to search out the nearest sub or surface target, detonate them prematurely, or send them to a waypoint.

Depending on the mission and type of enemy, you can expect anything from almost sheer ignorance of your presence and hostile intentions to a veritable sea of chaos. Some vessels seem to accept your death-dealing torpedoes with open arms, while others (especially those pesky attack subs!) have the audacity to actually take *evasive* action and then engage *you*! I'm quite impressed with the perceived A.I. of the computer opponents--doing stupid things (like broadcasting your presence with the cavitation generated by going flank speed or by pinging actively) will generally get you killed quickly, or at least dodging a mess of incoming torpedoes. You'll find yourself trying to be as quiet as possible and as deep as possible in order to get the job done and get out alive. The harder missions may very well find you trying your best to exploit the undersea terrain and thermal layers to your advantage while praying that the enemy does not.

It might take a while to notice it, but the music in this game is exceptional. It molds itself to the mood and pace of the current situation, and keeps you tense at all the right moments. It never overpowers the game. Crew voices are also well done, rounding out the game with helpful audio feedback to your various commands and updates on your status. There is something very personal in hearing one of your poor crewmen scream, "We're all gonna DIE!" right before that third torpedo blows your sub apart.

Seawolf stands on its own, a remarkable piece of work. It places the interested player in an environment where you'll really feel the pressure of being trapped in a tin can underwater, with sonar as your only eyes to the outside world. The tailored music and beautiful sonar sound effects enhance the atmosphere and heighten the illusion, and the graphics are pleasingly functional. Anyone looking for fast action and low strategy needs to look elsewhere. Anyone interested in an early 90s compelling simulation of modern submarine warfare will probably not be disappointed in Seawolf.