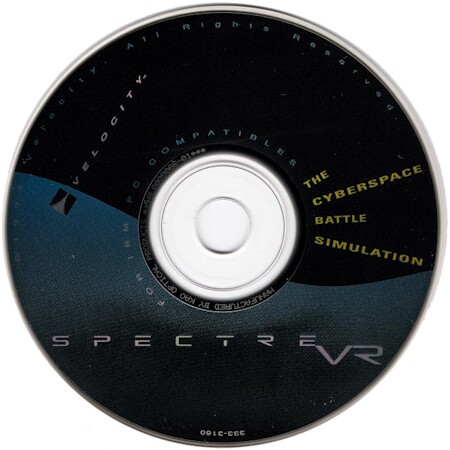 The Game
In Spectre the player controls a Spectre, an abstracted tank, in a strange world of geometric shapes. His goal on each of the innumerable levels is to collect the flags found randomly scattered about the level. But enemy tanks stand in the way, ready to fire on the player without provocation. So the player must not only collect flags, but blast other tanks. Points are scored for each flag, each enemy destroyed, and for speed of play (a bonus ticks down as time elapses).

That's really all there is to the game. Each level is just like the last, except for the color palette, number of flags, and number and type of enemies. This is not a game with an ending; there is no "cheese screen" to reward good play, only a list of the top ten scores.

Play begins with the player selecting one of four different types of tanks to control. Actually, the tanks all look the same; they vary only in their attributes: Speed, Shields, and Ammo. The three preset types are "Strong" (all shields), "Speedy" (all speed), and "Balance" (true to its name). The fourth type is a custom tank, where the player can experiment with any combination of attributes, parceling out a total of fifteen points among the three attributes.

After that, the player's tank drops (literally) onto the playing field. The standard viewscreen fills nearly the entire monitor, with a small area for radar in the upper right corner. Movement is easy with the number pad, and an aiming cross is thoughtfully provided for encounters with those nasty computer tanks. Unlike a real tank, the Spectre can only fire straight ahead, so when you rotate to face an enemy, that is the direction you will go if you accelerate.

Aside from enemy tanks and flags, the world of Spectre also holds Ammo Dumps, undulating squares on the ground which heal the player's tank and replenish his ammunition, and weird geometric obstacles, which are good for hiding behind when badly injured.

These obstacles are truly strange: giant rotating windmills; huge revolving cylinders; pyramids; and billboards. In the Mac version, these objects were all of a solid color. For some reason, in Spectre, the objects have designs on them. This bit of glitz is more distracting than anything else, although it does add to the feel that you are in a different world: huge eyes (vaguely reminiscent of "Blade Runner"), stylized planets, and hieroglyphics, among other things, emblazon the geometric objects. If you wish you can toggle the designs off. Not only does this cut down on distraction, it also speeds play considerably on slower computers.

On the lower levels, enemy tanks are simple red wedges which can be destroyed with a single hit. On higher levels, an orange tank, which looks like a shark's dorsal fin, appears; this one takes several hits. On succeeding levels, the red tanks get stronger, requiring two, three, even four hits to destroy. The orange tanks get flat-out nasty; they can almost match the maximum possible speed of the player's tank, and they can take as many as ten hits to destroy. The enemy tanks also become better shots, and fire quick streams of bullets which can be deadly at close range.

The player's tank picks up a single enhancement. At level ten and above you gain grenades. Grenades use up ten units of ammunition, but do damage equivalent to many hits. They also have somewhat of a scatter effect.

Two other viewing options (aside from the standard "cockpit" view) are offered. One is a three quarters isometric view. The other is a bird's eye view. While you can pan back in both of these to see more of your surroundings, neither is really useful, especially in light of the radar screen.

Spectre is a simple game and very well executed at that. What more could you want? 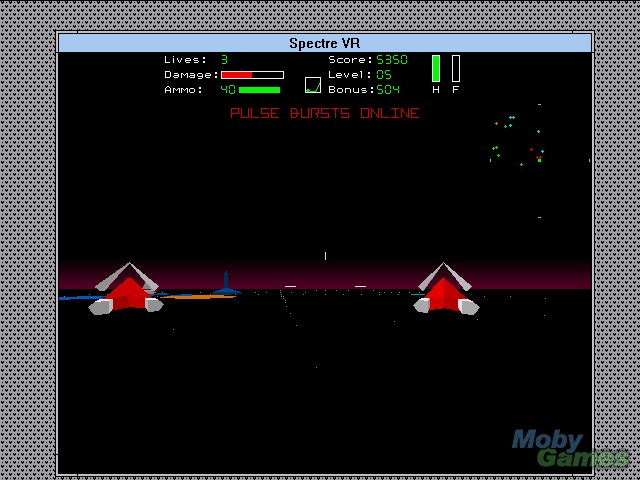 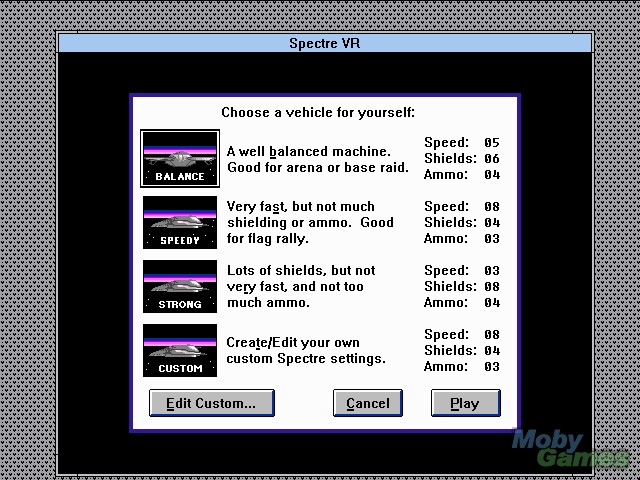