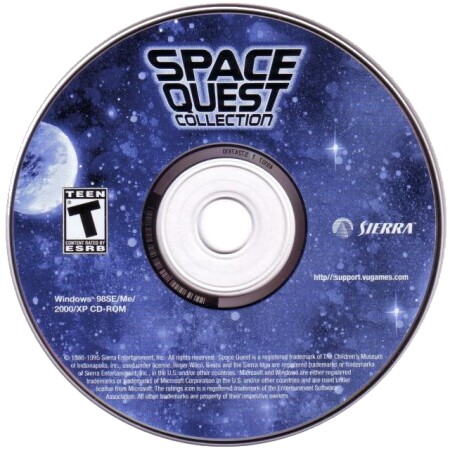 
Space Quest I: The Sarien Encounter -- The first game by designers Mark Crowe and Scott Murphy, a.k.a. The Two Guys from Andromeda, Space Quest I was released back in 1987 at the beginning of the adventure gaming mainstream era. The game used the early Sierra AGI engine, complete with 16 glorious EGA colours and beautifully stylized graphics, a nice soundtrack and a pretty impressive -definitely hilarious too- parser interface. The plot introduced series star Roger Wilco, a janitor, who started off his heroics by napping in a broom closet while aliens hijacked the spaceship he was supposed to be cleaning and grabbed the devastatingly deadly Star Generator, only to finally wake up and save the universe. The game introduced the series’ trademark humor, frequent -impressively varied too- deaths, difficult puzzles, arcade-y sequences and bad-guy Vohaul. Oh, and save often.

Space Quest III: The Pirates of Pestulon. Space Quest 3 was simply stunning and one of the better looking games of 1989, especially when seen on the Amiga. It also sported a truly post-modern and particularly funny plot involving the Space Pirates, a shovelware/software pirating group, who had kidnapped the Two Guys, thus endangering the future of the whole Space Quest franchise. Unless, that is, Roger stopped them, which apparently he did. The game, besides being excellent and taxing as ever, also featured tactical space combat and a playable arcade game.

Space Quest IV: Roger Wilco and the Time Rippers -- The first 256-colour VGA Space Quest with full SoundBlaster support and the first point-and-click game in the series too, Space Quest IV comfortably remains among my top 10 adventures even to this day. It’s got everything you could ask for really: time traveling to previous and future SQ games complete with appropriate graphic changes, Roger’s son, a fantastic goodies-filled box, some of the toughest (but quite fair too) puzzles in the series, Lucasarts game parodies, a burger making mini-game, Ms. Astro Chicken, droids, quality voice acting, latex babes, elaborate easter eggs, a smell icon, a Gnome's Lair review (also a walkthrough) and the aptly named Monochrome Boys. An absolute masterpiece.

Space Quest V: Roger Wilco - The Next Mutation -- The first Space Quest game that wasn’t designed by both the Guys from Andromeda, though most adventurers seem to agree it’s a mighty fine game. Reviewers liked it quite a bit too. Released back in 1993, Space Quest V had Roger apparently take on the Star Trek universe by graduating from the illustrious StarCon Academy, piloting his very own garbage-collecting spaceship and boldly going where no man had gone before, or so they say.

Space Quest VI: Roger Wilco in The Spinal Frontier -- The final installment in the series and the only one to do away with the silly places in outer space in order to focus on the silly ones inside the human body, as experienced by a highly miniaturized Roger of course. Actually, scrap that, as it’s just what the title implies. The game -an SVGA CD exclusive released in 1995- has Mr. Wilco exploring the vaguely nasty planet of Polysorbate LX while running into an incredible number of farcical video game, computer, pop-culture and movie references. Oh, and you’ll definitely love the cartoon-quality graphics and vastly updated point-and-click interface. 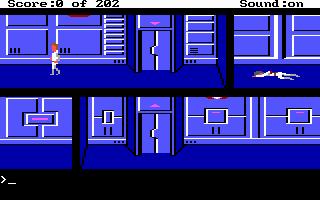 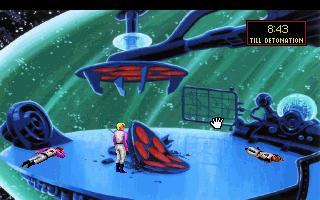 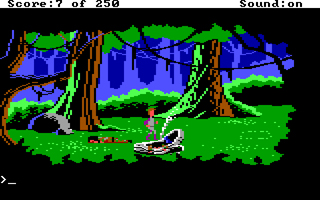 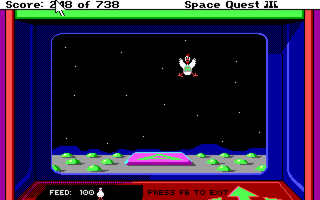 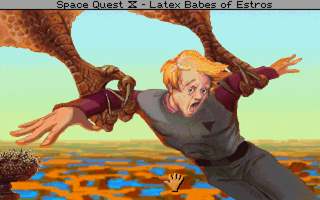 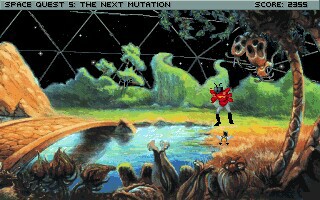 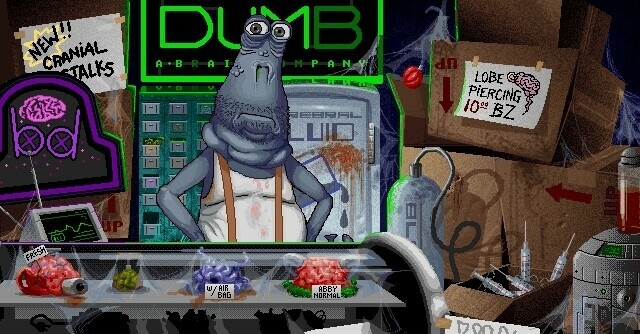