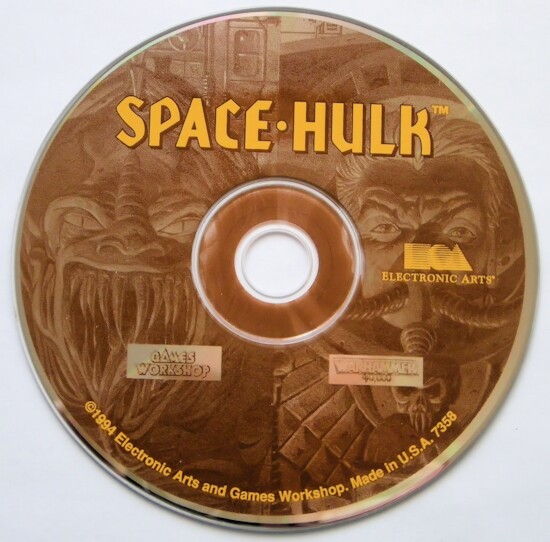 The Game
I didn't know what to expect from this game in the early 90s. I had played the original board game from the folks at Games Workshop and enjoyed it, but was wary of a conversion to the computer format. Board games do not always translate well, as evidenced by SSI's Renegade Legion: Interceptor (killed by Wing Commander's cinematic approach), and some of the Three-Sixty Pacific wargames (quality products in their own right, but sometimes a little intimidating to non-wargaming audiences).

The term 'Space Hulk' itself refers to hulks of huge, drifting spaceships in which the Genestealers live. Some hulks, relying on instable warp travel, disappear, only to strangely reappear (usually abandoned) years later. Terminators return to the hulks for a number of reasons: 1) to retrieve artifacts they believe may have been left on the hulks, 2) to destroy equipment left aboard which should be kept from the wrong hands, and (last but not least) 3) to stop the spread of the abominable Genestealers.

The computer game is very well done. Electronic Arts did a fine job of bringing out the sense of power marines feel as they splatter a walkway with the remains of a Genestealer, but also the sense of fear as the Genestealers rush toward them when a gun jams or when a hapless marine has his back turned to the enemy. I believe Space Hulk has a universal appeal to most gamers, but those who enjoy squad-level tactics and strategy games (such as Breach, Laser Squad, or Tegel's Mercenaries) should be especially pleased.

In the board game, marines had intense firepower but limited mobility, while the Genestealers had speed and close combat skills, but lacked distance weapons. It was crucial that players took care to exploit an opponent's weakness. The computer game is a solitaire one and the Genestealers are handled by AI routines. Thankfully, the AI is quite capable. Often, computer opponents are easy to defeat, but in Space Hulk, the Genestealers are smart enough to hide behind corners or wait until they have reinforcements before attacking. In addition, events like gun jams and missed shots help game balance and keep the player on guard. True to the board game, the Genestealers are extremely quick and mobile, and are deadly in hand-to-hand combat! Players must utilize the personnel and weaponry in their squads appropriately or a quick death is certain.

Allotments of time called 'Freeze points' are used to suspend action in the game. The player can use these moments to plan strategies, however, the time is limited, and the only way to earn back more freeze points is to engage in real time again. Thus one finds himself freezing for a moment to plan, then jumping back to real time to execute the actions and observe enemy movements (one of the views accessible to the player is an overhead map). After a few moments, the sequence is repeated. This method may sound cumbersome, but actually is an appropriate vehicle by which to establish game balance. In the board game, players exchanged turns. In the computer game, this freeze method gives the player a chance to deal with the Genestealer's incredible speed, and to coordinate large numbers of marines (some scenarios allow the player to control two full squads).

The graphics are very nice. The hallways of the hulks are dark and forbidding, the Terminators are detailed, and the Genestealers animated and disgusting, as they should be. What is amazing is how well the motion is depicted on the main operating screen. The Terminators have cameras in their helmets. The player is their commanding officer, directing them from aboard a ship outside of the hulk. He watches them from a screen which is divided into one large screen and four smaller ones above it. The total of five screens represent what each of the Terminators in the squad are seeing. As each of the Terminators moves, his movement can be seen by those behind him. If the player has coordinated the five Marines to move simultaneously, then all five screens will be active with some kind of motion.

The interface, totally mouse driven, is very intuitive. One can start playing almost immediately upon installation. Space Hulk also uses the secondary mouse button, an amazingly overlooked utility despite the increasingly ubiquitous presence of Windows. In addition, there are keyboard alternatives to all commands, and the documentation is competent.

In summary, the first person views put the gamer in the thick of the action. There are also tactics and strategies involved in this game, backed by a fine storyline and excellent sound and graphics. 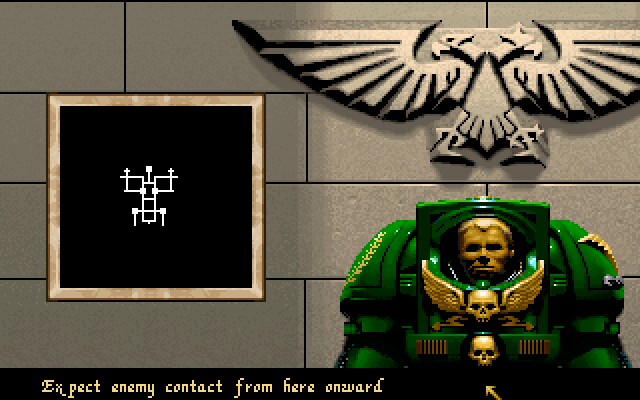 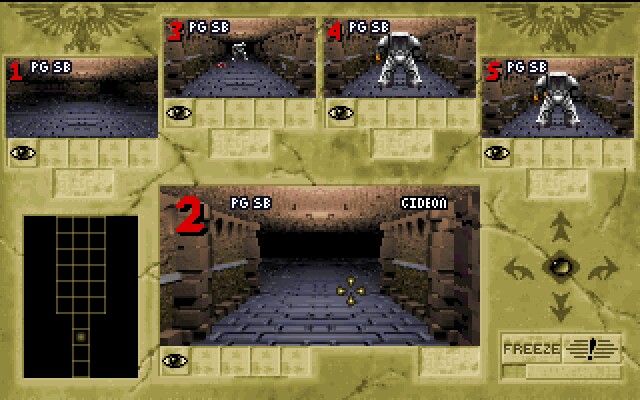