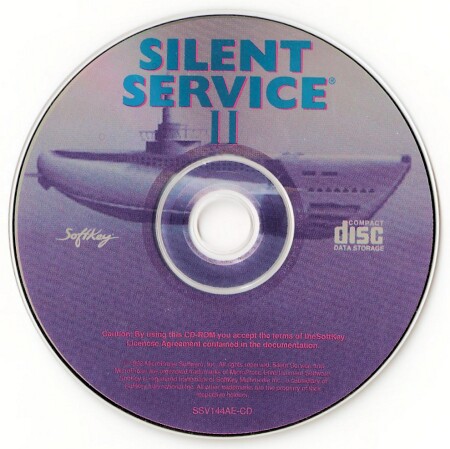 The Game
Silent Service II is not only one of the first, but also one of the best submarine simulators up until today. Compared to newer games like Aces of the Deep, the Silent Hunter series, etc., it is rather easy to understand and quite good for a quick session in between, if played on easy difficulty settings. Still, it can also be very challenging on higher difficulty levels. The game is set in WWII and is not focused on the Atlantic like most other representatives of this genre, but instead on the war between the U.S. and the Japanese in the Pacific Ocean and the Chinese Sea after the attack on Pearl Harbor.

There are several game modes available. You may decide to fight a single battle, do a single patrol or even a whole career; whereas the career mode probably is the most entertaining. Your goal is to sink as many ships as possible during the war in the Pacific and you may gain medals and higher ranks upon safely returning to your home port. Depending on the date you've selected for your start, you can choose between several types of submarines and weapons. If you select an earlier date, you will be able to do more war patrols, but have to use older boats which are slower and can not dive as deep as newer ones.

During the course of the game, you experience historically correct happenings of the war shown as news ticker messages, and benefit from technical developments like new types of submarines and torpedoes. However, your actions will not have any influence on the course of those events, so the game will end with a victory for the States every time - providing you live long enough to survive.

You can command your submarine through the different stations of the boat, which are:

The navigational chart - one of the most important stations: here you have a nav-computer that displays the position and heading of your boat and of surrounding enemies. Enemies are shown as long as they are detected by sonar and/or sight. There are many factors such as your depth, your own speed, and also the time of day which influence your detection range. These are even more important for your own stealth. In principle: the more noise you make, the earlier you will be detected.

The Bridge is probably the most underused station in the whole game, but if you want to experience some devotional moments standing there and watching an enemy battleship burn and sink while the sun just rises over the horizon, this is the right place to be. You should take care of the destroyer escorts before doing so.

The periscope: this station can only be accessed if the periscope is raised and if the boat has not dived below periscope depth (55 ft.). Here you can aim at enemies while submerged and shoot your torpedoes at them. To make your life easier, you just have to find an enemy, "lock" him in, and your boat's computer automatically does the target solution.

The binoculars on the Bridge are basically the same as the periscope; they can be used when surfaced only, but are an alternative if the periscope is damaged. When you are on the surface, you also have the opportunity to use the ship's cannon instead of torpedoes. The cannon does not do as much damage of course, but helps to save some ammo especially when hunting weaker ships like transports or tankers.

In addition there is the weapon status control panel, which displays how many of your bow and stern torpedo tubes are currently loaded, and the damage report which shows the condition of the ship and the amount of damage that it has taken. Your crew can repair almost any damage, as long as there is enough time. Finally, using the Captain's Log, you can gather some status information, like score and combat results.

Even if Silent Service II is not state-of-the-art anymore, it still manages to create some thrill and deliver an intense gaming experience. So close the shutters, turn on the red lights and you might even start to feel a bit creepy, while the enemy destroyers are pinging you with their sonar and you hear the explosions of their water bombs coming closer. 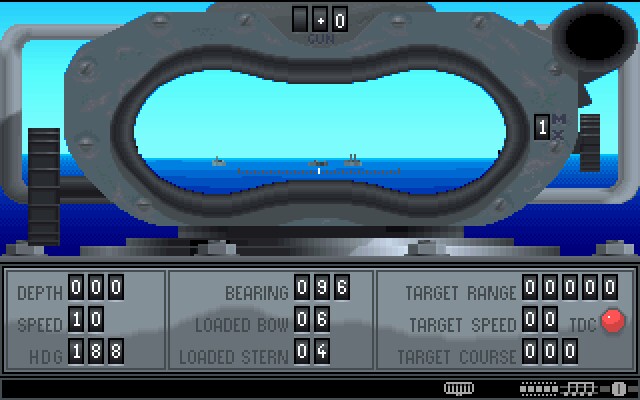 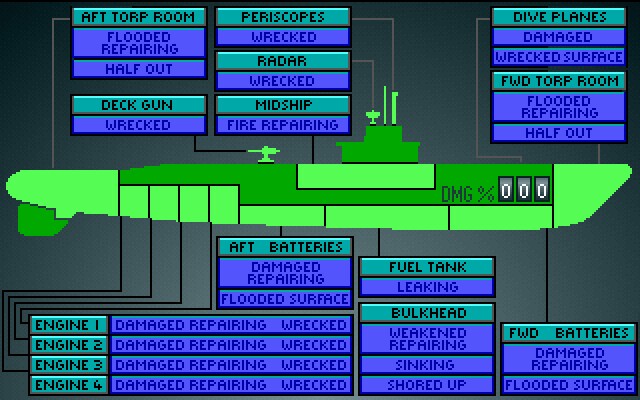