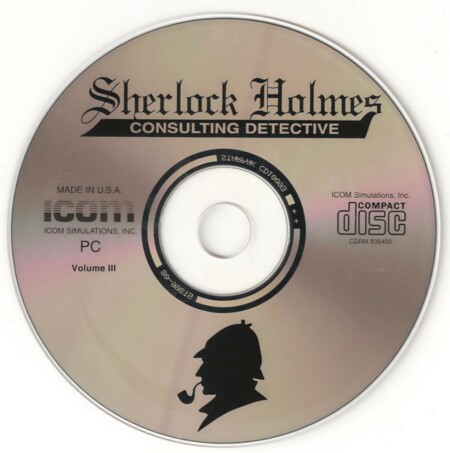 The Game
The Instructions feature Watson's voice-over explaining the icons that will be used during the game.

The Introduction has Holmes sit and tell you about late 19th Century London, the official and unofficial police forces (the Baker Street Irregulars), and your contacts in various official positions. You are then shown a screen with various pictures of people/places and, upon clicking on one, Holmes will explain who/what the person/place is and what kind of information they can provide. These are the people/places you will use to gather data and solve the cases. Amongst them are Lestrade of the Yard, the Hall of Records, a police chemist and an editor of the London Times.

Clicking on a case presents you with a video clip of Holmes and Watson introducing the case and then you go to the Main Screen. This is a map of London with 4 icons down each side. On the left you have Holmes's book, your notebook (with the names of the people you met in the introduction already entered), a directory of all the folks in London and the on-line Times issues.

On the right side, there is the Travel icon, Holmes's files, the Baker Street Irregulars and the Court icon, used when you believe you have solved the case. If a name is highlighted in either your notebook or the Directory, clicking the Travel icon will send Holmes and/or Watson off to interview that person/institution. Here is where the video clips are shown. If the person isn't involved with the case, a static drawing is shown with some voice-over telling you they aren't in or there is no clue to be found here. When the clip ends, you can either close the window, which will bring back the Directory/notebook or click on either Holmes's file or the Irregulars.

These bring up either a sheet of paper with Holmes's info on whomever, or a telegram from the Irregulars stating what they could or couldn't discover. Again, for people not involved, it'll be something to that effect, otherwise some useful information or reminder. This is a good way to remember who those list of people you met in the introduction are!

You can copy names out of the Directory into your notebook by opening the Directory, highlighting the name and then clicking on the notebook. I found no way to get RID of a name from the notebook, but it allows multiple pages so that's not a problem. There is everyone from Irene Adler to Bilbo Underhill in the Directory so you can't really solve a case by just clicking on everyone.

When you think you've got it, you click on the Court icon. If there are clues you haven't discovered, you'll get a voice-over saying words to that effect and you're dumped back into the game. Otherwise, the Judge asks you for the killer(s). If you don't do anything, Watson tells you to open either the Directory or your notebook and select a name. Then you're asked for a motive and must choose from the menu presented. In the Mummy's Curse, 4 people are dead so you go through this 3 times (one of the deaths is obvious and not directly related). If you get something wrong, you're immediately told so and dumped back into the game. If you get it all right, a video clip appears with Holmes and Watson discussing the conclusion of the case and then your score appears. This is where the supposed replay value comes in. Your score is based on "unknown elements" (according to the docs) and you compare it to Holmes's ideal score. You can try to lower your score by replaying the adventure. Since I messed about A LOT, my score was 1100 compared to 26 for Holmes!

Hints:
Read the Times issues VERY carefully. I missed a couple clues because I didn't remember some items I had been told and relate them to the Times stories. I tended to have the directory open, click on Holmes's file and then to the Travel icon or the Irregulars depending on what Holmes's file had to say. From there you can then save the name in the notebook if need be. 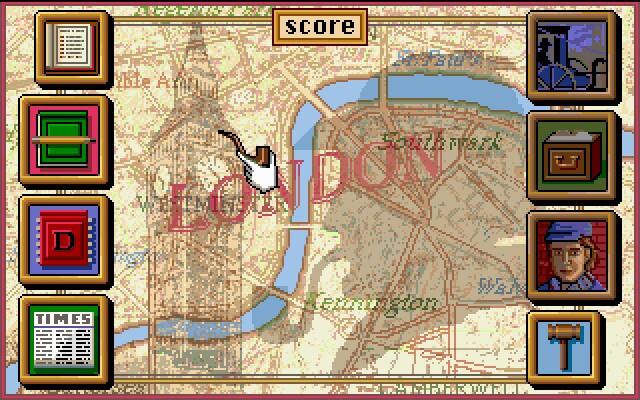 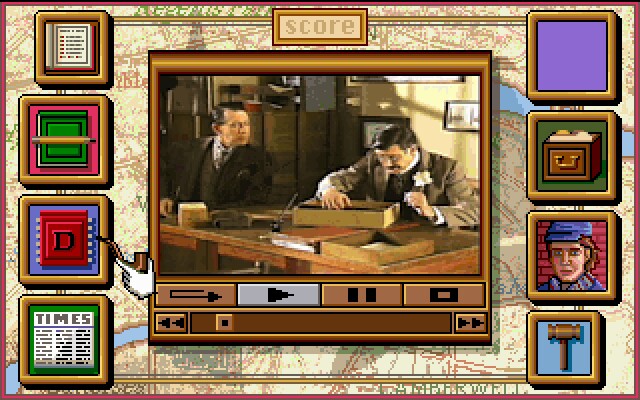