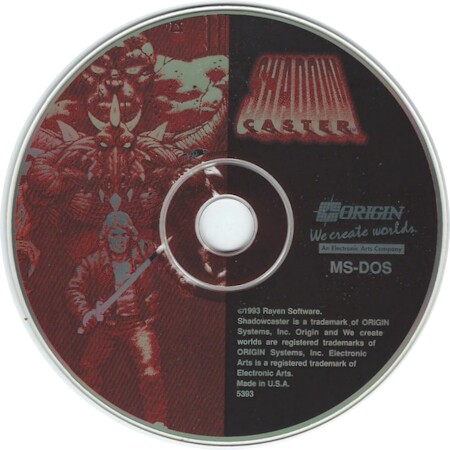 The Game
Shadowcaster is a point-of-view maze game in the tradition of Wolfenstein 3D and Ultima Underworld and uses a reconstructed game engine written by John Carmack (of Id fame). The engine combines elements of the Wolf-3D engine and the Underworld engine. Like Wolf, the game is fast and furious but limited to 90 degree angles. Like Underworld, a floating cursor dictates movement, there is a nifty auto-mapping feature, and the environment is darkened at a distance and illuminated as you get closer.

In Shadowcaster, you play the role of Kirt, a unique human with the ability to "morph" into six other shapes: A six-legged feline, a 2-foot high "little person," a floating eyeball, a reptile that looks like a cross between Godzilla and SEGA's "Frogger," a flying dragon, and a Tuff-Enuff Stone Terror-mental. Each form gives you new abilities, and lets you play the game in whatever way suits you best. Of course, you don't begin the game with these six forms. You must earn them during the course of your quest. Oh, and you must defeat some evil guy from doing some evil something-or-other.

There's the plot. Did you blink and miss it? That's okay. The plot's not important. What makes this game enjoyable is the same thing that makes most texture-mapped POV games enjoyable: Being within the environment. Of course, there are differences. You don't inhabit the world of SC like you do Underworld. You don't experience a sense of impending havoc like you do in Wolfenstein, Episode 6, Boss Level. You simply putter along (albeit at high speeds), killing things as you go.

Fortunately, the environment itself makes up for some of these monotonous moments, because graphically speaking, the game looks great. Monsters and items hold their shape with minimal pixilation, even close up. There is a wide variety of locations, giving you a sense of a large quest. Likewise, there is a wide variety of "bad guys" all with different methods of striking you down.

I never found the sound track too monotonous simply because I was never in one level long enough for it to become tedious. Luckily, the music appears to switch with every level.

There are many interesting weapons and wands to help with your quest. What is most enjoyable is experiencing the environment as the different elementals. This, in itself, is the core of the game and justifies playing Shadowcaster. Each elemental is a different height, so you see the environment from different perspectives depening upon who you "are" at any given moment. They move at different rates: The floating eye floats forward at frustrating speed while the "little person" whizzes along, actually going thru gorey corpses that you have already slain (since he's so short). If anything gives SC replay value (I'll have to reserve total judgement until I play again), it's this feature of changing the experience with each form you can take. 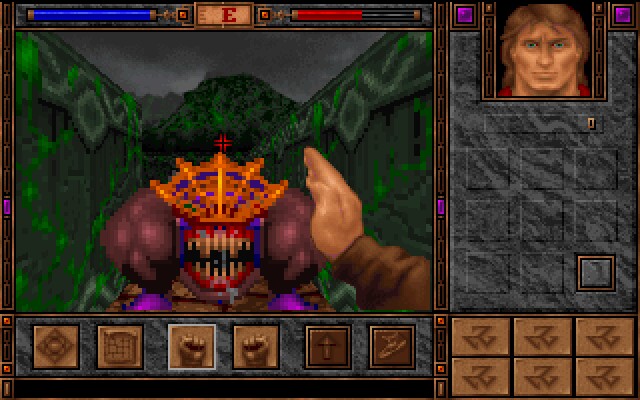 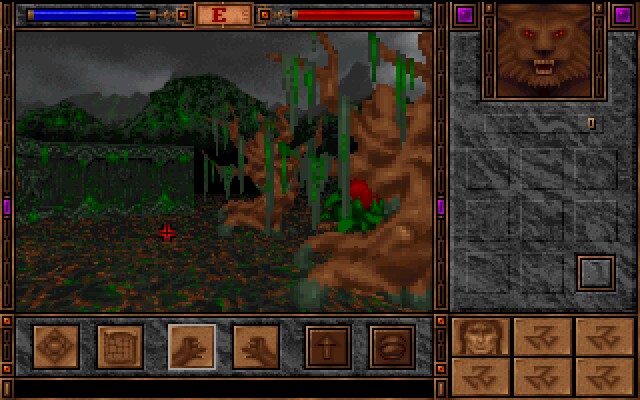