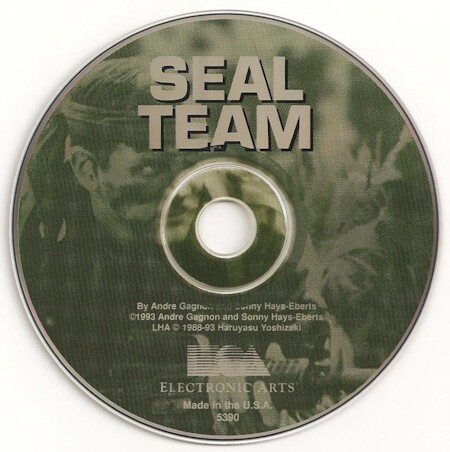 The Game
A review of SEAL Team must begin by explaining what SEAL Team is NOT - it is not a Rambo-style shoot-em-up in the genre of Wolfenstein 3D. If you want to charge around blazing ammo at everything in sight in that style, SEAL Team will disappoint you - or at least kill you quickly. While there is plenty of excitement in SEAL Team, it is in many ways a Falcon 3. 0 for infantry combat, rewarding slow, stealthy approaches, brief, brutal, and utterly one-sided ambushes, proper use of fire support, and solid tactics instead of rapid reflexes.

SEAL Team simulates the operations of four-man SEAL (SEa, Air, Land) commando teams in the Mekong Delta of South Vietnam from 1966 to 1969. The game plays in two modes - Practice and Campaign. In practice mode, the player can choose which mission to play; in Campaign, the player chooses a Point Man (four are offered for each of the four years covered) and attempts to survive a series of assigned missions for up to four years. Many of the missions are directly based upon historical SEAL actions: the game's authors, Andre Gagnon and Sonny Hays-Eberts, apparently received close cooperation from several former SEALs, including Chief James Watson, curator of the UDT/SEAL Museum.

Missions begin with a briefing from your commander, explaining the overall situation and the reason the mission is to be carried out, often with side commentary based upon the historical situation. While rarely of actual import to game play, these briefings do add quite a bit of atmosphere. Once this briefing is finished, the player moves to the mission briefing. Here, the player can look over a mission summary, which lists in brief form the objectives of the mission, any fire support teams (PBR gunboats, Seawolf helicopter gunships, and OV-10 aircraft) available, and the intended means of inserting and extracting the team from the mission area. A "movie screen" runs a detailed mission briefing, with commentary about objectives timed to a scrolling, zooming map of the mission area; this part of the briefing is critical, as it provides the player with a first glimpse of the map and warns of any unusual dangers to be expected.

At this stage the player can also change the personnel composition of the team by changing who will fill out the other three spots (from a list of available SEALs). All SEALs are rated from Green to Elite; in theory, as a SEAL performs more missions this rating, and his effectiveness in combat, will rise.

In the Campaign game, the player is then treated to a "SEAL Bull Session", in which the team members engage in a short piece of dialogue about how to survive and prosper in missions, and the general world situation. Some of the chat is specific to the mission or the date: for example, one bull session in 1967 begins "I hear Israel really took it to the Arabs" and after a brief (and somewhat tongue in cheek) discussion of the relative merits of fighting in Vietnam or the Middle East, concludes that SEALs will never have to fight there anyway.... These sessions are mostly for atmosphere and do a very good job in that role; one of the reasons that this reviewer rarely does Practice missions is because the bull sessions are absent.

The player is faced with a variety of tactical options, ranging from the fire orders given to the team (from "cease fire" to "fire at will") and the team's formation, to speed of movement and posture - an upright, running SEAL is a lot less stealthy than a prone, crawling SEAL, forcing the player to balance any need for haste against the likelihood of detection by the VC (Viet Cong guerrillas) or NVA (North Vietnamese Army regulars). In fact, haste is rarely required, and the team will spend most of its time crawling in order to increase the probability that any firefights occur on their terms. The team can be split twice, once into two pairs, and then into two singles (including the player) and a pair; the split-off groups can be assigned separate tasks, such as covering the other SEALs or setting demolition charges. Split team actions are not well explained in the manual; teams sometimes refuse to act upon orders (such as Search or Demolish) for no apparent reason. When in doubt, you need to do it yourself or with the full team. Fire support can be requested via the map screen; players are advised to stay WELL away from any area targeted! Friendly fire from support teams can be a very real problem in the game as in reality. Mission types vary from the noisy - observe targets for aircraft or demolish bunkers with explosives, to the moderately noisy - ambushes, patrols, and POW rescues, to the very quiet snatch missions (where you try to grab somebody alive). Note that the SEAL team usually has nothing to gain from giving away its position in any of these, but that a snatch mission optimally is completed without a shot, while the observe or demolish missions will involve some large explosions at some point. Often the team has several missions, such as patrol to X and snatch person Y. Noises are generally well rendered, at least on a Sound Blaster, from the flat crack of rifle fire to the shouts of the Vietnamese.

Eventually the player calls for the extraction team, having either achieved the objectives, or suffered major casualties or death (resulting in an emergency extraction). After two transition scenes of the team being transported back to base, debriefing begins. Included are a report on the SEAL team's actions - enemy killed or captured, documents and weapons seized, SEALs killed or wounded, and a point score, a historical report of a real SEAL team's actions if applicable, and a chat by the commander noting the repercussions of success or failure. This is also where the odd behavior noted earlier shows up, resulting in mixed-up debriefings if the player used 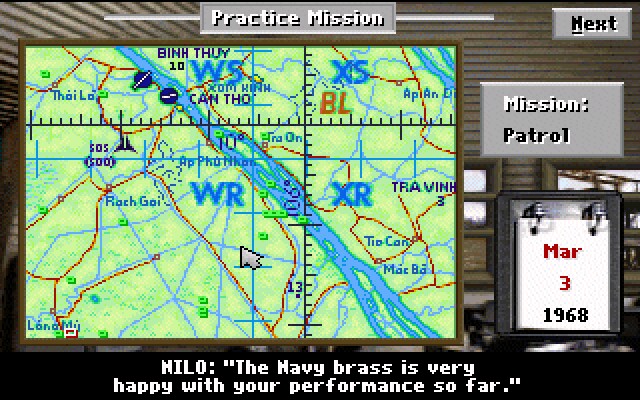 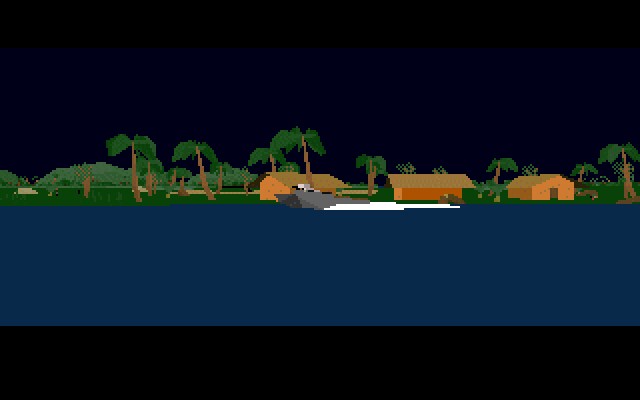