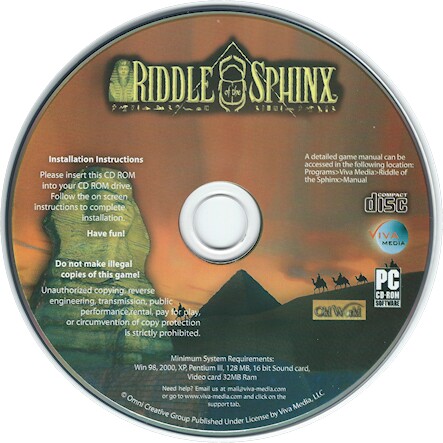 The Game
As predicted by the prophet Edgar Cayce, your friend Sir Gil Blythe Geoffreys, an archeologist, unearths a mysterious tunnel leading below the Sphinx. Does it lead to the Atlantean hall of records... to a secret burial chamber of a long-forgotten pharaoh… or to a secret spa resort? The tunnel and where it leads, however, is left an enigma since soon after its discovery, your friend vanishes, leaving you to follow in his footprints and unlock the secrets buried under the sands of the necropolis. I have to be honest about my bias: I love ancient Egyptian history and will gladly spend hours researching the Sphinx and the Great Pyramids while surfing on-line. So the story snagged me with its contemporary and intriguing premise.

In Sphinx you enter a recreation of the Great Pyramid, and hike up the exact great hall into an identical Queen’s chamber only to use a robot--a real robot, known as Upuaut II--that had been created and used by Rudolph Gantenbrink. In real life, Gantenbrink and his team, who searched out answers to Cairo’s mysteries, were kicked out of the Great Pyramid and their robot research was terminated. You pick up where these men had truly been cut off.

For anyone at all interested in a game that takes its research seriously--as found in the Gabriel Knight series by Jane Jensen, for example--the Toblers’ work is for you. ROTS unveils a story that combines realistic details, from structural recreations of Egyptian artifacts to well-researched ancient art design, with fantastic plot twists to create an engaging story for those who may already enjoy Egyptology. For those who don’t, there is little here beyond investigating the mysterious disappearance of your archeologist friend.

The tempered sands of ROTS are navigated in a first-person point & click style. By clicking on a series of nodes floating out among the golden pixels, you can transition from one sometimes-static, sometimes-360-degree panoramic screen to the next in search of whatever hidden clues lie among the ruins. Overall, this game works best as a first-person experience, especially since your persona is devoid of any personality and is as empty as the Sahara desert. ROTS is not about building character or about interacting with others; it never even pretends to be about the people involved. It is simply about exploring, discovering artifacts and solving ancient and even prophetic mysteries. So, if you like your adventure like you like your bathroom experiences--relaxed and with little conversation beyond talking to yourself--then ROTS is the game that will keep you glued to your seat.

Not only did the Toblers do their research, they also used their imaginations. Far too often, we--as adventure gamers--get one end of the spectrum or the other…an edutainment title devoid of well-utilized fantastic elements, a la Timescape: Journey to Pompeii, or a fantasy environment devoid of any grounding, as seen in Forever Worlds. ROTS not only effectively combines these two elements in its unraveling story, but also in its detailed pre-rendered environments. Okay. I know what you are thinking: “But I’ve seen the Great Pyramid before. Nothin’ special.” True, but you’ve never before seen an image-by-image recreation of its innards, nor have you seen a mythological valley of the kings reconstructed with rich color and proportioned detail before its erosion.

Like Indiana Jones, you must cross caverns, solve ingenious puzzles, unlock hermetically sealed passageways, and uncover clues in an attempt to--no, not hook up with a beautiful, somewhat forceful female sidekick--but to stop an ancient curse, all alone. Yet these puzzles are less Indiana Jones and more The DaVinci Code, asking players to listen to audio tracks, take notes, match up symbols, and be patient. While it would be nice to run into the Great Pyramid by grabbing a torch and lighting it on the way as you chewed tobacco, you must instead think ahead, start the generator and turn on the work lights.

When you first reach the Giza Necropolis, the adventure and puzzles are organic. You are given just enough direction from items found in your friend’s now abandoned tent and then you must go your way, starting with the Great Pyramid or with the Sphinx. Your inventory, a practical backpack, is easily accessed by tapping the spacebar. Though you will be storing all sorts of practical items and mystical artifacts in your satchel, this game is not inventory-heavy; instead you will be required to use--dare I say it--your memory or a notepad to jot down numbers, symbols or phrases. Oddly enough, though adventure gamers might not think so, sensible and logical puzzle solutions can coexist with a Myst-mutation about ancient Egypt. How long do such logical and deductive puzzles last in the Sahara, you may ask? Well, about as long as a puddle of water in the sand. The further you explore into the belly of such Egyptian structures, the more gritty and obscure the puzzles and their clues become. Though these puzzles may grate on nerves and become frustrating for players with shorter attention spans, they make perfect sense. Outside the Egyptian structures, puzzles, heavily inventory-based, are more straight-forward and practical, while within the Egyptian structures, the puzzles turn deadly, more ambiguous and intricate. The reason: the puzzles inside the pyramids have been crafted as riddles and various obstacles to detract tomb robbers or to keep ancient secrets hidden from lesser minds. So, if you can’t stand the heat, get out of the ancient coffin.

ROTS--like the Sphinx itself--stands the test of time for a variety of reasons, and not simply because it is based on a tried and true Egyptian formula. It is a game about still controversial Egyptological topics; it is a game about evoking awe in the adventure gamer; it is a labor of love and an obvious passion of its two primary developers, Jeff and Karen Tobler. The game is an accomplished, engrossing, and rewarding adventure jaunt, and one of my all-time favorite adventure games. 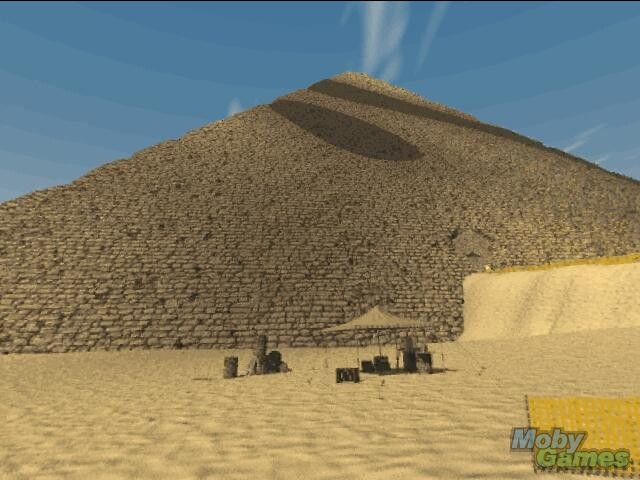 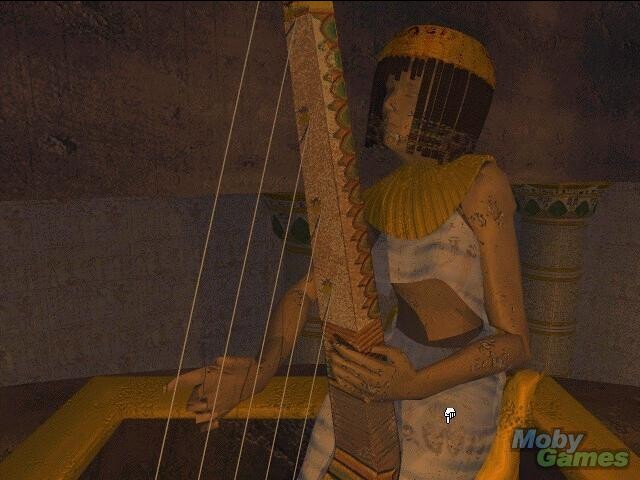