The Game
Gaston Leroux probably never guessed how far-reaching and how successful his novel The Phantom of the Opera would be when he published it in 1911. Neither did he probably anticipate the number of incarnations his novel would take - from the blockbuster silent movie starring Lon Chaney in 1925, through several more film, play, and rock opera versions portraying the deformed Phantom as a pathetic failure, or a misunderstood but good-hearted man, or a sick psycho; to perhaps its best known incarnation, the musical by Andrew Lloyd-Webber that premiered in 1986 and is still going strong.

Return of the Phantom is presented as a sequel to the classic horror tale "Phantom of the Opera," which took place almost one-hundred years ago. In the tale, the Paris Opera House is once again under siege by an mysterious mask-wearing fiend who is bent on the Opera House's destruction. The man claims to be the "Opera Ghost," better known as the Phantom of the Opera! But he was killed a century ago - or was he? You play detective Raoul Montand of the Paris "FBI," opera patron and friend of the house's owner. As the curtain rises on the game, a beautiful crystal chandelier plunges from the domed ceiling of the opera house, kill- ing several of the audience and introducing the mystery which you have to solve.

Background
You play the part of Raoul Montand, a detective with the modern-day French equivalent of the FBI and patron of the Paris Opera. During the opening performance of Don Juan Triumphant, an opera written a hundred years ago by the the legendary phantom Erik, the chandelier suddenly breaks loose and plummets into the packed house below, killing one woman and injuring several others. Only quick thinking and fast work on your part helps keep order and evacuate the opera house quickly.

Later, Monsieur Brie, manager of the Opera, thanks you for your help and confides in you that he thinks this is a copy-cat crime, identical to the chandelier-falling disaster that occurred a hundred years earlier at the hands of the Phantom. It's M. Brie's fear that whoever cut the rope to the chandelier is familiar with the Phantom leged and will strike again, unless he's discovered and stopped in time. M. Brie is counting on your skill as a detective to find the maniac before another disaster occurs.

As they state in their manual, MicroProse has changed several elements of the original story of the Phantom. Instead of the dual-sided Phantom in Andrew-Lloyd Webber's musical who, in one moment was a pitiable, man rejected because of his deformity, and at another moment an enraged, jealous spectre), MicroProse portrays the Phantom as a twisted madman, killing for no reason and deserving of no pity. Also, Phantom is set in modern-day France rather than in the 1800's, during time of the Phantom. (At least, that's the setting when the game begins.)

Game Play
Fans of LucasArts' early 90s games will be comfortable with the interface. Before the game begins, players can select either the "challenging" mode with all the puzzles, or the "novice" mode, with easier puzzles. Below the main window is a list of verbs (e.g. pick up, throw, talk to, look at, push, pull, etc.) The player selects a verb, then chooses a noun from the main screen or the inventory window. (e.g. look at chandelier, talk to Monsieur Brie, pick up note, etc.)

One very useful feature built into this game is the ability to instantly walk across a room with a press of the spacebar! Many times, when walking the length of the building, I would save time by 'warping' Raoul across the screen; something that I will sorely miss in other games. Way to go MicroProse!

One slightly different addition to the LucasArts interface is a set of additional verbs which will appear beside certain objects Raoul is carrying. For example if Raoul picks up a ring, the verbs "wear" and "remove" will be added to the list of verbs. Also, to make the game more interesting, almost everything in the main window is an acceptable noun - the game recognizes the chandelier, the seats, the aisle, the back wall, the ceiling, the floor, the carpet - everything (though only a few items will turn out to be important.)

Interaction with other characters is done via the action/inventory window, which is replaced by lines of text which you can select to have Raoul speak them. While you are allowed some freedom in the order in which you ask questions or make comments, typically you are not allowed to leave a conversation until you have selected all of them, so take notes! You won't be able to come back and recap a conversation once it's taken place.

Sound and Vision
Also central (and arguably the most important feature) to any good graphic adventure are the graphics themselves! Microprose has created a visually striking game, which does an excellent job in setting the atmo- sphere! Each screen is detailed enough that the feeling of being in a creepy, hundred-year-old building comes right through the screen; the catacombs and the Phantom's lair is spooky and surreal - this game would definitely best be played in a dark room! The exceptionally smooth animation of the characters suggests that they used live-action models for the scenes, and digitized their pictures into the game. In addition to the wonderful backgrounds, the smoothness of the animation helps draw one into the opera house itself.

As would be fitting a work of this nature the soundtrack is quite good. Wherever Raoul goes, suitable background music follow him. Most of the time, haunting classical pieces are played, fitting in quite well with the opera house setting. Other places call for different types of music, all very appropriate. Add in occassional voice clips and the aural environment is rather attractive.

Style
Phantom has a number of features that made the game easy and fun to play. Two of the best features concern saving the game. Although you can save your game at any time, Phantom saves your game automatically when you quit from the main menu. This quick save can easily be selected which off the opening menu. Furthermore, every time Raoul dies (and there weren't very many times in the game that he did/could), the game immediately resumes at a point shortly BEFORE Raoul died. (e.g. when I had Raoul jump to his death from a platform, the "you're dead" message came up, then the game restarted with Raoul back on the platform.)

In the spirit of LucasArts, MicroProse has opted not to make this into a 'whomp you over the head every time you make a mistake' game. The few times that I bumbled my character into a fatal situation, I was given another chance to play through the scene -- after a suitably graphic death, naturally! And the objects necessary to complete a task tended to be near to the scene of the task, helping avoid the "Hm, did I forget to pick up object X in the last section?" syndrome. This makes Phantom an excellent introduction to fairly novice gamers.

Conclusion
Phantom is an ideal game for novice adventure-gamers, or fans seeking a good example of the state of the art in the early 90s. Phantom has, for its time, great sound, great graphics, lots of "safety" features, and puzzles that are perfect for introducing people to adventure games. The one thing that might appeal to adventurers of any skill level is the plot; MicroProse has done an excellent job of taking the original story of the Phantom, changing a few things, adding more mystery and even a little science-fiction, and coming up with a compelling adventure. 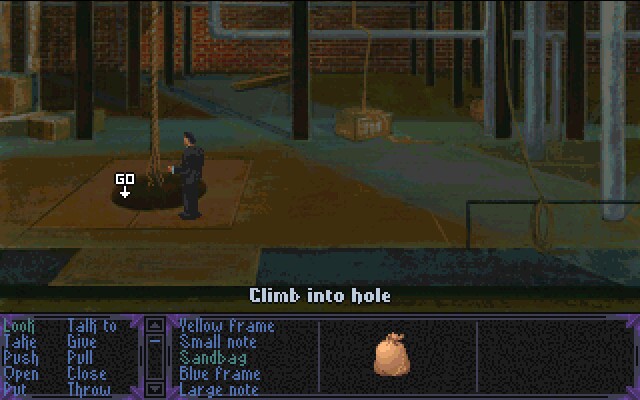 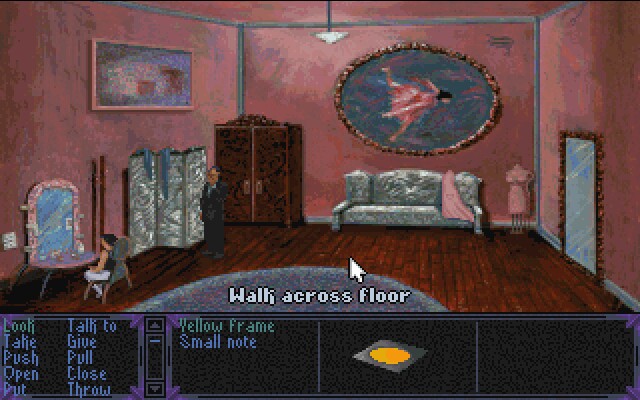