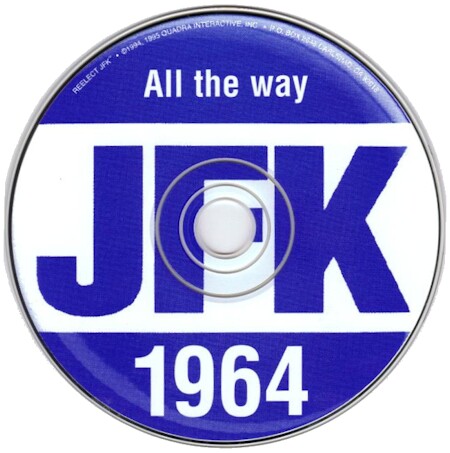 The Game
The game's pitch: It’s November of 1963. You’re noneother than President John F. Kennedy and you’ve narrowly survived the attempt on your life in Dallas. You’ve got to figure out who planned the shooting and bring them to justice while simultaneously dealing with Vietnam, coaxing the Civil Rights Bill through Congress, and planning your ’64 reelection campaign. It had real actors! What’s more, its premise put you squarely in the shoes of a real historical figure and offered up the chance to change history as we know it.

You play in first person as Kennedy himself and navigate rooms using the mouse which becomes a hand, arrow, or magnifying glass when hovering over an appropriate hotspot. The bulk of the game is conversations with other characters, whether in a meeting or pounding the pavement on the trail of your would-be assassin, but you will also have occasion to search rooms, read files, and otherwise manipulate your environment. You’ve got 50 game days to play, one day from each week starting in November of 1963 and ending on Election Day in ’64. There’s a game clock that doesn’t actually advance unless you do something. Feel free to sit around all you want or leisurely examine a piece of evidence. Your time won’t drain until you end your current action. This is good if you want to pause the game, bad if you click a file again by mistake and accidentally waste double the time reading it twice.

Each day has eight hours and begins behind your desk in the Oval Office. Some days start with conferences, surprise crises, or other events that can take anywhere from two hours to the entire day. Most days, however, are yours to manage by way of four buttons along the bottom of the screen that let you call meetings. There’s one for Vietnam, civil rights, and reelection. The fourth is used to summon your brother Bobby (then Attorney General) when you think you know all the details of the Dallas shooting.

Vietnam and civil rights both have a set number of meetings associated with them, most of which require a few choices from you which will dictate the events of the next meeting and the overall success of your efforts in either area. Each meeting takes up a certain number of hours, so you can’t call a long one late in the day when you’ve wasted too much time, and you can only call one meeting of a particular type per day. If you attend these meetings regularly, you’ll eventually either succeed or fail in managing Vietnam and getting the Civil Rights Act passed, but you never have to call them at all, and can run through all 50 days without ever touching either topic.

The same goes for your sleuthing. There isn’t a button that lets you conveniently call up the next bit of the mystery; you’ll have to trigger these events yourself through the course of your investigation. But just like the other issues, you can choose to drop the pursuit entirely and still beat the game. This is its oddest aspect since, to me anyway, the murder mystery is the main reason to play. But the manual explains that your only required goal is spelled out right in the title. Get reelected and you win. That’s why you’ll be encouraged to spend your free time on the third button option: reelection. However, as I’ll explain later, even this button can remain unclicked for the duration of your term in office.

Whether the topic is Vietnam, civil rights, or reelection, each meeting is structured the same way. You find yourself in a board room with a bunch of old white guys who present you with a problem or situation. You can ask them questions and make comments as you see fit. At the end of the meeting you make a decision. Maintain an advisory role? Ask a conservative senator for a favor? Run a mud-slinging campaign commercial? It’s all up to you. The result of your actions can be seen in the evening paper and in the change in your approval ratings the next day. Many issues will keep cropping up over several meetings before they’re finally dealt with.

Occasionally the day’s work will not be a meeting but a one-on-one conversation or phone call where similar decisions are required. Aside from concrete choices, you can also guide the mood of the Commander in Chief by selecting calm or angry reactions to other characters. If you’re dealing with an outside party they may not take kindly to your rudeness and decide not to help. You’ll want to save everyday because you’ll be given no second chances. Piss someone off and you can be sure they won’t want to talk to you again. Phone numbers will actually disappear from your phone book. Of course some people will only respond to a little hardball. And if you’re dealing with your staff, berate away. They won’t quit. If you’re playing casually, this instant karma system of choices won’t matter too much. But if you’re obsessive like me and want to find the best outcome possible, be prepared to save and reload constantly as you do your JFK rendition of Groundhog Day.

I realize that a game that’s at least 50% meetings might sound a little bit dry, and at times it can be. But your cabinet does an excellent job giving you the West Wing version of your given dilemma: the bare facts, a little color commentary, then a list of your options. Make a decision, face the repercussions the next day, and reload if you want to try again. While conferences can take up the majority of a game day, they rarely take more than ten minutes of real time and are typically capable of holding your interest.

In the mire of all of these meetings, you may wish to measure the effectiveness of your leadership and, by extension, your chances at reelection in November. No problem. You’ve got two meters indicating your national approval rating and your international approval rating. Some decisions may make folks at home wave the flag while simply pissing off the world at large, and vice versa. Keeping your U.S. meter high will result in reelection. As to the world meter, I have no clue what it’s good for, but it appears useless. It might factor somehow into reelection but since Uruguay doesn’t have a significant number of electoral votes, that wouldn’t make much sense.

When you’re burned out on weighty political affairs, take the day off and play Encyclopedia Brown by exploring the White House and FBI building for possible leads in your quest to unmask your murderous conspirators. This is mostly tracking people down and asking the right questions, but you’ll also take part in such Presidential activities as breaking into the FBI director’s private files and using a computer hidden down a secret passage to monitor government communications. Yes, you, the leader of the free world, sit in front of a UNIVAC in the basement and hack the CIA’s email.

Get on the right track and Bobby will set up a trip to Dallas where you can continue your investigation. But be careful. You’ll soon discover that your enemies haven’t let their failure deter them from trying again. You’ll be warned not to campaign in certain states when the Secret Service gets wind of a threat, and you’d be wise to take their advice. Otherwise, you’ll get a cut scene of some schlub with a gun pushing his way through a crowd of your fans to take you out. That’s a game over and as far as I can tell there’s no way to avoid it besides chickening out and staying in Washington. That’s only the beginning of the tale.

When you think you’ve got everything figured out, use the fourth button to call Bobby and he’ll ask for the names of everyone associated with the shooting and their motives. If your theory is weak, he’ll be reluctant to issue an arrest warrant, but you can inform him that you are in fact the Goddamned President and he should just go ahead and get the warrant anyway. Bad theories will result in false arrests and embarrassment which will in turn affect your approval ratings. Also of note is the fact that you can accuse literally anyone whose name you’ve heard, except Bobby. Indict members of your staff and they still happily report to work the next day.

The game states clearly in its manual that the only real people represented here are the late president and his later late brother Robert F. Kennedy. While that’s not completely true (both Jackie and LBJ are referenced and make brief vocal appearances, among others), the game does go out of its way to fictionalize the vast majority of its characters. This is probably to avoid the lawsuits that would surely have followed from the actual members of the 1963 White House staff, but it can be detrimental to what is ostensibly a historical sim. It gets especially silly when dealing with people who would never sue. Trouble in Cuba? You’d better figure out how to deal with “Premier Lopez” because Castro is nowhere to be found. And before you ask, Oswald is absent as well.

Despite this “names changed to protect the innocent” style, Reelect JFK manages to create a very believable 1960s White House. Cuba, Russia, Panama, and other issues of the day come up regularly, but your historical hindsight won’t help you deal with them. You may know that in a few years Vietnam is going to look like one of our worst mistakes, but to the people around you it’s the noble fight against communism. Elect to pull out and bring our boys home at your earliest opportunity and the public will accuse you of cowardice. Likewise, violent rioting by African Americans to demand equal treatment isn’t considered quite as justified as it is today. But with a little give and take you can achieve the desired outcome the same way Kennedy would have had to do it. It’s a much appreciated respect for accuracy that really adds to the experience.

If you’re looking for a taste of what it’s like to be the big cheese and can appreciate the wonderfully campy Kennedy brothers, this game comes highly recommended. It makes you think a little to get reelected and replicates the political climate of the early 60s admirably. 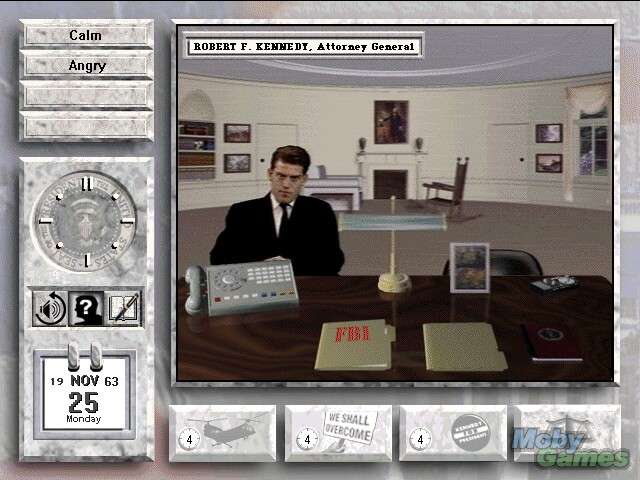 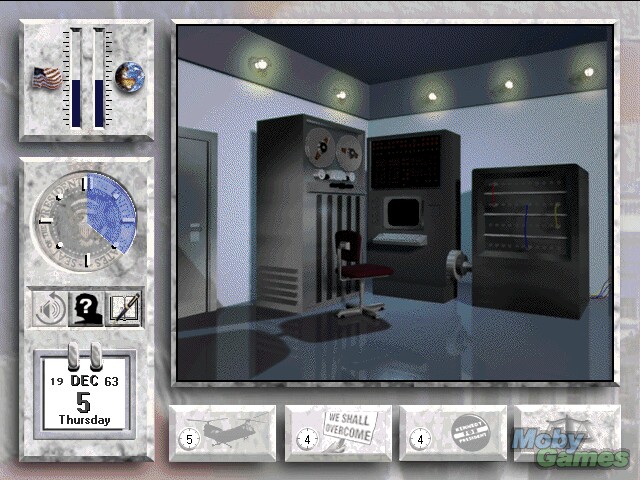