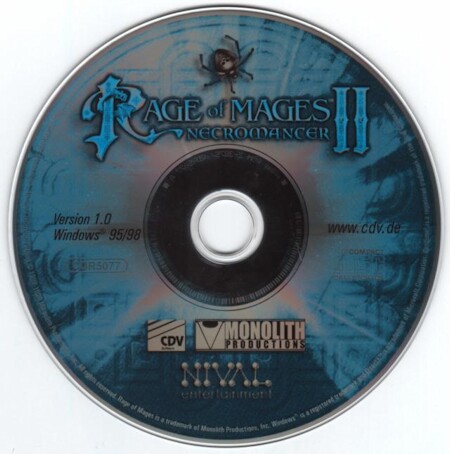 The Game
Rage of Mages II: Necromancer is the sequel to the first game in the series and continues in its role-playing and strategy roots. This time the player must fight over 30 enemies on their quest to defeat the evil Necromancer Guild. On your journey through forests and deserts, you will find companions and search for the Crown, an ancient treasure which has the power to defeat even the most powerful necromancer in battle.

Rage of Mages II uses many of the original's visual and audio effects, and its new scenery, monsters, and items will easily blend with the old material to make the game seem comfortably familiar, at least on first impression. Your orange-cloaked heroes still look dull, although their paper doll-style portraits can be adorned with a seemingly limitless combination of fantastic weapons and armor, from your typical steel sword and tower shield on up to magical adamantine halberds and dragon-scale leather leggings. Otherwise, the game still looks like a refined Warcraft II, with a top-down perspective and plain 2D creatures and settings.

On further inspection you'll notice a few nice touches, like terrain topography, and how it affects your heroes' speed, and lighting effects from spells and such, and how they're more visible at night than during the day. The graphics in Rage of Mages II look clean and bright and may even grow on you after a while, although the dense scenery has a bad habit of obscuring the action sometimes.

Rage of Mages II is both open-ended and cohesive, a combination that is difficult to achieve at all, let alone this well. Though the campaign is essentially linear, in that you need to complete one quest to go on to the next, you have a lot of flexibility in choosing how to approach each task. You'll learn about quests by chatting with the patrons at the inn; you'll hire all manner of mercenaries to aid you; and you'll tend to have several different quests that you can attempt at any one time. Within those missions, you'll often learn of other tasks that require your attention, and just as likely there will be more quests in store upon your successful return. Likewise, the missions themselves offer a lot of variety, under the constraint that all are fairly brief and emphasize tactical combat, since you'll only be controlling your heroes and any mercenaries that come along.

You'll save a starving village by defending its flocks of sheep from a pack of wolves; you'll reassemble a shattered artifact; and you'll fight dragons, bands of orcs, and renegade knights and necromancers. You'll restore order to villages subjected to tyranny; you'll reunite loved ones; you'll avenge orphans; and you'll arrange to help a pack of carnivorous squirrels return to their homes. All these and dozens of other such quests play out like typical attack and defense missions with which you're familiar from countless real-time strategy games, but Rage of Mages II provides the context, continuity, and sense of reward to make these tasks seem meaningful. And thanks to a well-written script, a continuous experience-point system for your characters, and a stringent economic scale that demands you spend your wealth carefully, Rage of Mages II encourages you to keep on going.

Although the game is challenging even on the medium difficulty setting, playing it is easy enough. With the notable exception of waypoint orders, Rage of Mages II lets you issue most every command you'd want or expect from a real-time strategy game. You bind your units to hotkeys (which conveniently hold over from mission to mission), and you can easily issue move and attack orders, set your mages' default spells, quickly switch weapons, stand your ground, retreat, and so forth. You can even hit a key to make your character pick up all dropped items in the area, and you can toggle formation movement and automatic spell-casting options. All the while, your units will do a good job of marching where you tell them to, and although the game doesn't move quickly (and bogs down at higher resolutions), it maintains its performance even when a lot is happening onscreen.

Even though Rage of Mages II controls well, sometimes you'll find yourself stuck. You'll engage in battles you're ill equipped to handle, or you'll hire the wrong help for the job. Regrettably, the nature of this game is such that a great deal of trial and error is in order. You'll often blunder into ambushes, and the moment one of your heroes dies, the game ends, demanding you reload and reattempt the scenario. Fortunately, you can save at any time, and trial and error with Rage of Mages II is so painless and so commonplace that soon enough you'll think nothing of it. The game even offers a convenient option to abort missions altogether, so that you can choose something else and try that scenario again when you're more prepared. Like the original, you'll have more fun playing through the campaign and getting to the bottom of its story.

In the end Rage of Mages has an effective combination of gameplay elements, storybook style, and likable characters add up to a game that feels like more than the sum of its parts. 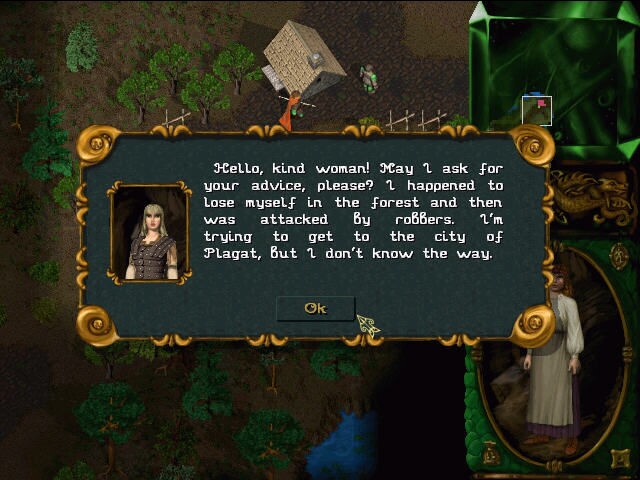 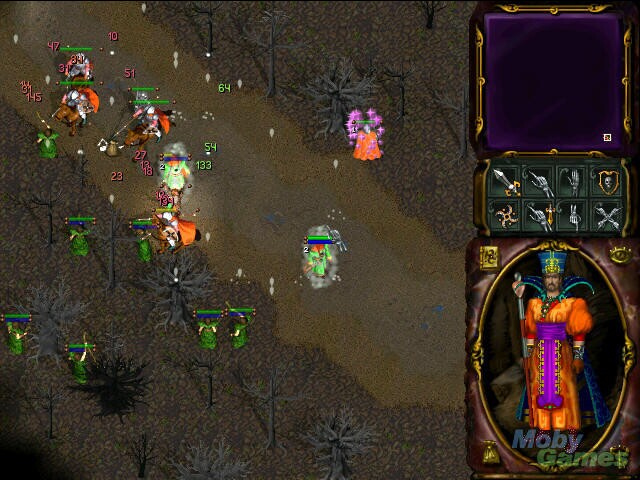