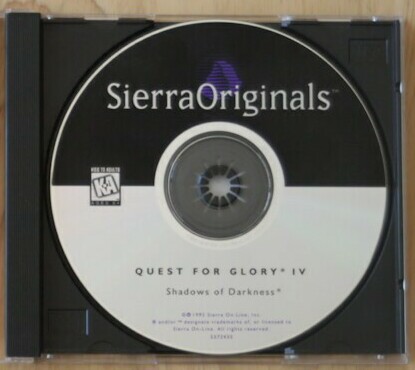 The Game
This is the fourth installment in the Quest for Glory series. Shadows of Darkness, like its predecessors, combines a Sierra-style adventure game with some aspects of fantasy role-playing. The protagonist is an aspiring hero whose personality, skills, and style are all determined by you, the player. There are three different character classes to choose from and many personal attributes, ranging from strength to luck, that you can tailor to suit the hero you envision. You can also choose to import a character from a previous Quest for Glory campaign.

The setting of the game is the dreary but perilous land of Mordavia. You awaken in a dark cave with no idea where you are or how you got there. Throughout the game, the answers are slowly revealed. Of course, the world is threatened and, and course, you alone must save it. An evil entity of monolithic proportions, which was placed in a limbo state by a powerful mage, is being unleashed by a pair of evil sorcerers who are planning to use you for their own horrific means. You must uncover their plans, follow your destiny and, well, save the world. While you're preparing to save the day, there are a remarkable number of subplots in which you can flaunt your heroic prowess. There's a ghostly swamp, a graveyard, a band of gypsies, a castle, a nude female zombie and plenty of other mysteries you must unravel in the creepy Transylvania-esque land of Mordavia.

To accomplish this, your hero must think his way through different game sequences and solve logic puzzles. Many of the game sequences change depending on the hero's character class. Thieves, for example, can find their guild somewhere within the city limits while mages will discover the joys of dueling the faerie queen and her court. Here, more than in any other Quest for Glory adventure, character class determines how your hero accomplishes certain tasks, enters different areas, and deals with foes. One can finish the game and become stumped when trying to deal with a familiar situation using a different class.

As with the previous chapters, QFG IV has a strong fun factor. There is an increased number of quests to solve and the new, much-improved combat scenes. Quest for Glory III had one main plot and a few sub-plots to keep you occupied. Its sequel has a more interesting main plot and has probably twice as many puzzles to test your wits. For example, the evil witch Baba Yaga threatens to kill you unless you return with an elderbury pie. (This pun is typical of the silly humor that fills all the QFG games.) You must find out what goes into making such a pie and retrieve the ingredients using the skills and items in your possession. Some of the puzzles, such as the ones outside Dr. Cranium's lab, are fairly childish but most require a reasonable amount of cleverness.

Your hero will soon discover that staying alive is the first and most important step in smiting evil. The creatures in the forest are fond of eating human flesh and some just enjoy bloodshed. Either way, you must guide your hero through strategic or arcade-style combat.

Combat has evolved greatly since the first installment of QFG. In Darkness, the hero can move forward or back, duck, slash, parry, cast spells, throw daggers or make impressive acrobatic attacks. And all of these can be controlled via the mouse or keyboard. However, if wrist straining tests of hand-eye coordination are not for you, the fight scenes can be fought automatically by the computer. Using this mode, you can set the levels of aggressiveness, magic use, defense, and the frequency of special attacks that the computer will use in fighting for you. So, whether you live to pick fights with monsters or you'd rat her get on with the quests, this game will fit your playing style. Great feature -- The strength and skill of opponents is determined by the same setting that controls the difficulty of the logic puzzles!

Besides battle, personal interaction is extremely important and is done through dialog menus that list possible topics and questions. Unfortunately, the other characters in the story seem more like information libraries than people. Those that get offended in one statement won't remember what happened after the mouse clicks away their last quote. There are also few characters that have any real effect on the hero, but at least all of them have quirks that make them interesting or help provide some necessary comic relief.

The sights of Mordavia are presented in nice, 256-color, hand painted VGAscreens. The muted grays and browns of most of the scenes add to the dreary atmosphere of Mordavian. In the daylight, Mordavia's forest is alive with flowers, birds, and different types of shrubbery (some of which even talks back to you). As night approaches gradually deepening shadows appear in the starlit scenes. Also, there are full-screen shots of each of the talking characters during your dialogs, not just pictures in a window.

The music in the game is another strong point. The themes very effectively add to the mood of the various adventures you face. I discovered that I could tell exactly where the character was without ever looking at the screen just by the music and I soon found myself humming the songs to myself at work. The sound effects work well to provide punctuation to the events that occur. Overall, the graphics and sound are excellent and account for a large portion of the game's appeal.

Overall, Quest for Glory IV offers a fascinating story, nice graphics and animation, excellent music and many other special features that set it apart from other adventure games. It provides many more hours of playing enjoyment than other games as well. I recommend this game to all adventure game aficionados or to anyone to whom the idea of living the life of a storybook hero appeals. 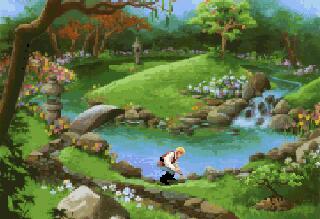 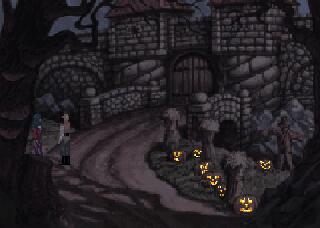 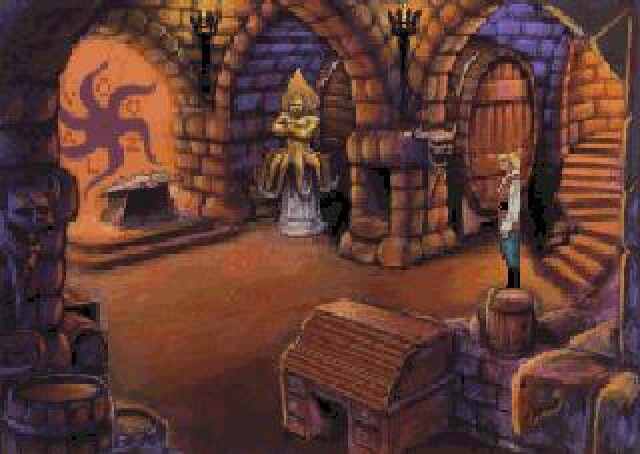