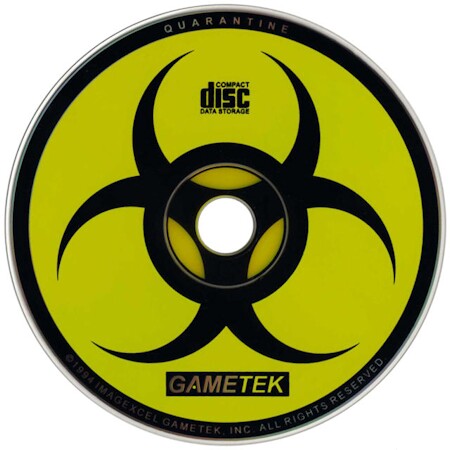 The Game
Quarantine is set in the city of Kemo. Kemo, as the name would suggest, has been the target of bizarre government chemical and germ warfare tests. This has rendered the city a biohazard area full of mutants. This is where Omnicorp, a corporate giant with all the trimmings, steps in, guaranteeing a return to normalcy for the residents of Kemo. Of course this isn't their true intention or else we wouldn't have much of a game would we?

Where does the player fit into all of this? The dashing hero, isn't exactly Sean Connery in James Bond. He is, however, very close to Robert Dinero in Taxi Driver. Yep, a lowly cabby, and he has only one thing on his mind, survival.

The player starts the game with about 100 bucks, a hover cab, with headlight mounted machine guns, and hopefully a healthy respect for his life. I personally found the early part off this game very frustrating.

Driving the cab was difficult and not very intuitive. I kept driving in to walls, and when I wasn't, I was constantly being toasted by other deranged motorists. Worst of all the stock machine guns are pitifully weak. As I got used to the controls and the other motorists driving habits, however, I began to make my way around the city. I picked up my first customer. He was a rude punk, with a bad attitude. In Kemo, this is the average resident. Needing the money, I decided I would give him a ride anyway. This makes up the main portion of the game. As things progress the player also makes deliveries and takes on special missions for various patrons. Those are the really important missions, but the player can't ignore the general passengers. He needs the money.

This brings me to my favorite part of the game. Going shopping and then enjoying my purchases. As soon as I got some cash I headed for one of the "Weapon King" shops. There I found one of the areas where this game really shines: lots of very different weapons. I upgraded my headlight machine guns to a higher caliber. This made a for a much more enjoyable jaunt about town. The improved machine guns also came with a free UZI submachine gun allowing a more effective spray out the windows to help keep down pedestrians. Other weapons include mines, many types of missiles and something that shoots a napalm like substance. There are other weapons I won't mention. I liked the variety of weapons. None seemed too much like the others, and the AI involved with some of them is pretty impressive. There are various non-weapon upgrades also. These are necessary to succeed in the game but aren't as much fun to talk about. They certainly aren't as much fun as the hood mounted rotary saw.

One of the things that I liked about this game is that killing things is a necessity but the player must do so selectively or else he will run out of ammo or just plain fail at the mission. However, I still found it impossible to curb my violence when some hover bike would side swipe me and then take off while I skidded off the road into a building or a tree.

After you get really good at driving a cab, i.e. being a hack, you earn enough money to inflict a lot more damage, i.e. hack some beings. Graphically the game is very similar to doom. It has about the same speed of movement, except that you can sustain higher speeds for longer because of the layout of the game. The graphics are generally well done and I like the fact that you are outside. As you approach things from a distance they just pop into view; however, this is done at a much farther distance so the effect is more one of distant haze than magically appearing obstacles.

As far as I'm concerned, sound is just as important as any other part of a game. This is another good point for Quarantine. Most of the sounds are very well done. They are generally clean and appropriate. They also don't cause any hitches in the action. The music on the CD is actually pretty good, and in general much better than your average game soundtrack. The musicians are Australian grunge bands. The music is very good for setting the mood that the game is trying to create. I also found Pearl Jam, Offspring and Jimi Hendrix made for good driving tunes.

The mood that the music and the game are going for is one of a more violent version of Blade Runner. A dismal and dark future, with little hope and no real justice. It does a fine job of this. The game doesn't try to pull to many punches, but it all so tries to keep a lightness to it. The statements the fares make when they get in and when you check the map are pretty humorous. It certainly didn't keep me rolling on the floor, but the humor is more subtle tongue in cheek stuff.

If you liked Doom, but want something a little different and with a little bit better plot and better weapons, this would be an excellent choice. It takes a little time getting used to. Give it a chance, though, and it is worth the effort. 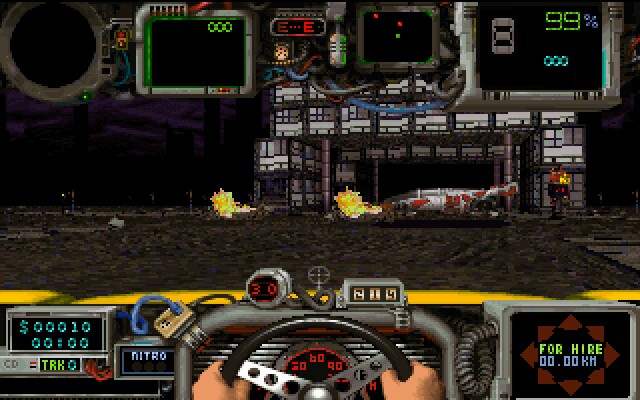 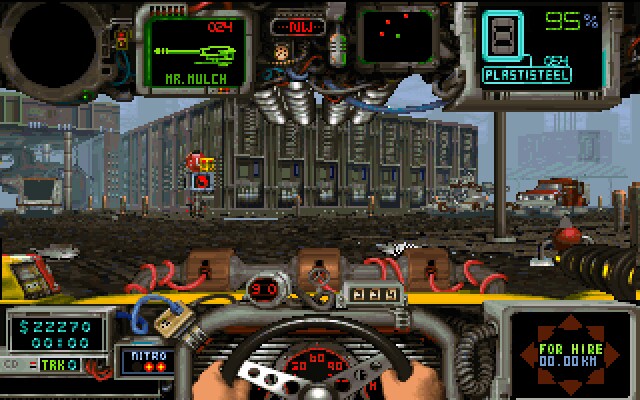