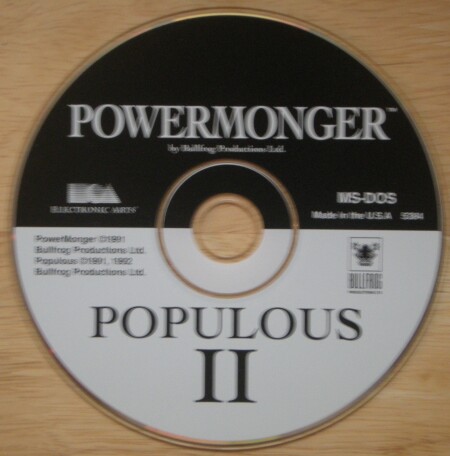 The Game
Populous II
Populous II: Trials of the Olympian Gods is a great sequel to one of the most unique computer games ever made. Every aspect of the game was improved and various features added to make it a deeper game. In contrast to some unnamed god you play in the original Populous, in the sequel you actually are a god -- the son or daughter of Zeus, no less. Your task is to win a place for yourself in the pantheon by getting your worshippers to take on and beat the followers of the other gods. All in a day's work.

That Populous II isn't just a prettier Populous is obvious from the start: different points can be allocated to different elements to make your character more or less powerful in that area. For example, if you want your god to be a fire god (handy when fighting Neptune), you can give him/her more points in "fire" element. You will then get powerful fire effects (e.g. meteor shower and volcano) to wreck havoc on your opponents' followers much quicker than effects in other elements.

As in the first game, you must use supernatural powers to help your followers defeat the enemies. Your powers, as in Populous are what makes the game a lot of fun: in addition to old favorites such as tidal waves and volcano, there are many more creative ones such as baptismal fonts which turn enemy people into your followers (on the downside, these converts can change back into the enemies when they fall into it the second time!) The bigger the effect, the more mana you must have. Mana comes from your followers: the more followers you have, the more mana they give you. If you have enough mana, you can also summon famous Greek heroes such as Perseus and Theseus to help rally the people--- and burn down enemy houses in a hurry.

The great fun in Populous II is the little tricks you will learn as you play. If the enemy is on a holy pilgrimage, for example, rather than trying to kill them directly you can plant a swamp in their way and watch them march to their deaths. You can plant trees all throughout the enemy land and then throw a match to it and watch an entire enemy city burn in one giant conflagration. Planning, timing, and dexterity are all required for success, as well as quick anticipation of your enemy's strategy. Each of your opponent is introduced before the battle begins, and they do follow their legendary traits (e.g. if you fight Neptune, expect to see a lot of water effects). To round off this gem, there are random maps, multiplayer options, and practice mode where you can learn the game's mechanics. Even today, you won't likely find a better god game anywhere.

PowerMonger
The purpose of the game is to become the ultimate Powermonger. This is accomplished by conquering the last territory (bottom right corner of the map) on a 13 x 15 square map. To get to this territory, you can conquer all 195 territories (for masochists), a minimum of 27 territories, or anything in between. You start in the upper left corner of the overall map (1,1). As you conquer each territory you can move only to adjacent (top, sides, or bottom) territories. As you get further to the right of the map and farther down, the conquests become harder.

The playing board for Powermonger is divided into several sections. The upper left of the screen shows an overview of the territory you are currently in. By selecting various icons, this map will show contours, objects (trees, houses, workshops, men and roads), settlements and food stores. In addition, your position is always marked. Below this screen is a balance showing your conquest of the area. When the balance tilts all the way to the right, you have effectively conquered the territory. (You do not have to conquer every settlement.) Below the balance are controls to rotate and zoom in on the main map. The main feature of this map is a 3-D representation a portion of the territory shown in the overview map. The 3-D representation is fantastic. You can zoom in to show individual men, trees, buildings, birds, sheep, etc. Everything can be queried (The question mark icon). Every person has a name and occupation and even the trees are labeled as to type and kind. The detail here is staggering. You will see the seasons change, grass grow, leaves fall off the trees, snow fall, rain storms, etc. Sounds include birds being spooked (a good sign that someone is coming), sheep going baa-baa, hammering and sawing from workshops, wind blowing, victory shouts, swords clanging etc. These sounds provide important clues about what is happening in the world. When armies clash you can actually see the individual soldiers fighting. Above the 3-D map is a visual representation of you (a captain) and any captains you have recruited. Above the captains are 3 bars graphs showing the amount of food on hand, the number of men in the army and the captains overall health. These bars provide a visual representation of the overall strength of your force. Exact numbers can be had by clicking the mouse on your captains medallion. If your captains health (fitness) falls to 0, the game is over.

Conquest of each territory is a matter of icon manipulation and strategy. In some territories, brute force works well (aggressive posture in attack mode). In others early diplomacy is highly recommended. Some terr- itories are very easy to conquer while others are almost impossible. You must manage the number of men you have, food sources, inventions, your conquered towns and your captains to win. Hungry men will defect. On some harder territories, if the people are unhappy a rebellion against your enlightened rule can occur. Recruit everyone in the city and no one will be available to produce much needed supplies. In the early territories this isn't much of a problem, but as the game progresses food becomes very scarce. Remember, while you are trying to conquer this world, the blue and red armies are also trying to be Powermongers. You will have to out compete them. 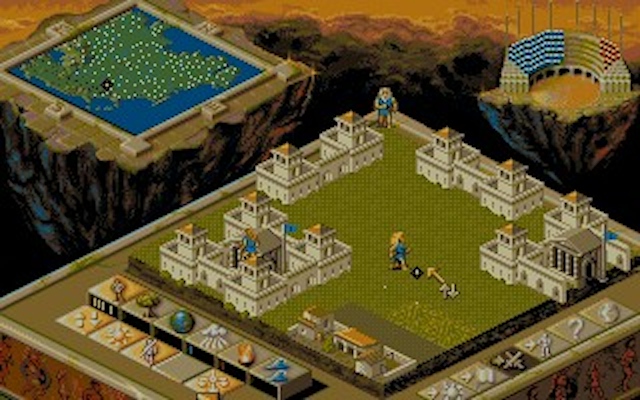 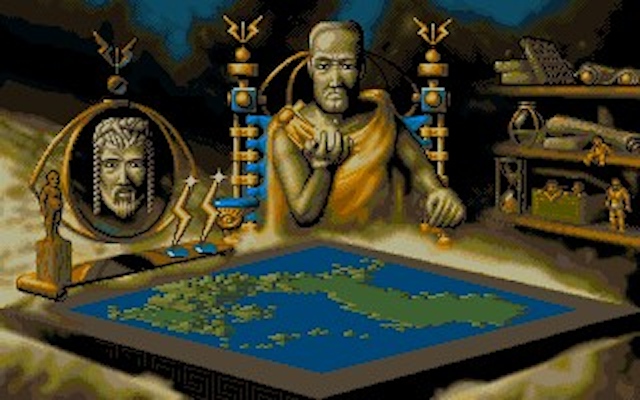 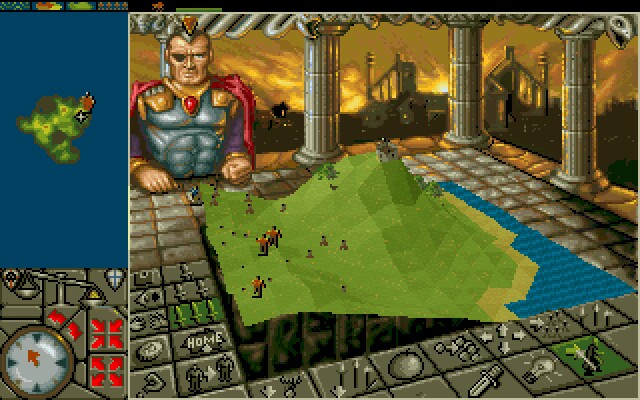 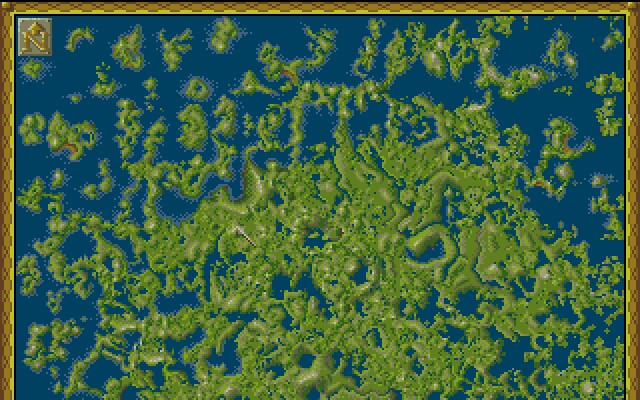