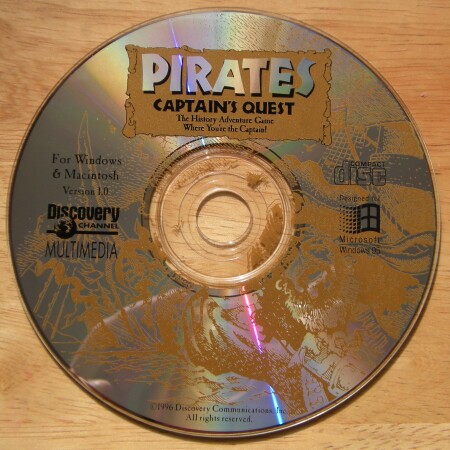 Actual Game
The Game
Avast, mateys! Shiver me timbers! Hoist the scum from the yardarm, then make him walk the plank!

Unless you already wear an eyepatch and have a parrot perched upon your right shoulder, then Pirates: Captain’s Quest should be a new experience for you. With more “edutainment” value than found in most games, this product from Discovery Multimedia puts the player in command of a mighty, seafaring ship. This vessel is afloat during the “Golden Age of Piracy,” said to have existed between the years 1700 and 1725. As the captain of a pirate, merchant, or privateer ship, it is the job of the player to sail the Caribbean waters in search of trade opportunities and rival pirate ships.

There are many choices for the player to make before he begins his journey into piratedom. First, the player must decide whether to play as a Male or a Female captain. Then, the captain’s nationality should be selected from the available choices of British, French, Spanish and Dutch. A difficulty must be decided upon, and the type of mission, Merchant, Privateer or Pirate must also be picked.

At the beginning of each game, the player is given a quest. In addition to accumulating gold, establishing trading sites and possibly sinking enemy ships, the player must accumulate clues that will help him to solve his quest. These tasks are accomplished by piloting your craft to the various Caribbean islands, speaking with the inhabitants and trading with the merchants.

With the opening formalities out of the way, it’s time to sail. While navigating the high seas, there will be two main activities in which the aspiring pirate will have to participate. The first is battle, which will occur whenever the player’s ship gets within range of a ship flying another nationality’s flag. When in range, let the cannon balls fly, as it is sink or be sunk! The other activity is the investigation of the various islands on the map, in order to gain clues and establish trade. Once an island is discovered and the harbor on that island is located, the player must land his ship. He is then presented with a number of buildings and other objects to explore. Often, he will find a merchant and will be offered the opportunity to trade items from his ship’s stores for other valuable commodities. In other instances, he will be challenged to a sword fight by another pirate who is often guarding some gold. And at other times, he will encounter citizens who may suggest that another island be explored.

Sailing the ship takes place from a view just behind the main mast, where all controls are easily accessible. Clicking just to the left and right of the mast will change the ship’s direction. Viewing the sails and clicking on them (or using the keyboard strokes) will raise or lower them, affecting the speed of the ship. A compass is in the lower portion of the screen, and a large map of the area is accessible from the menu bar. Cannons are present on either side of the vessel, and either clicking on a particular cannon or pressing the appropriate key will launch an offensive attack against the enemy. By ascending the main mast to the crow’s nest, the player can get a close-up, bird’s-eye view of the immediate area. Descending to the galley will allow the player to inventory his current level of supplies.

At various points along the journey, the player will be presented with information which appears in The Chronicle. This is a book-like apparatus which will appear from time to time, providing the player with tidbits of information and historical references regarding the age of Pirates. 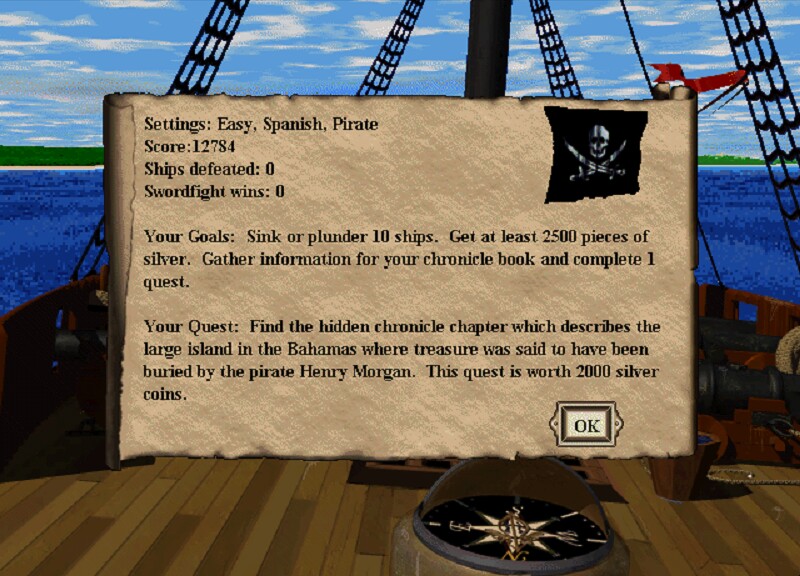 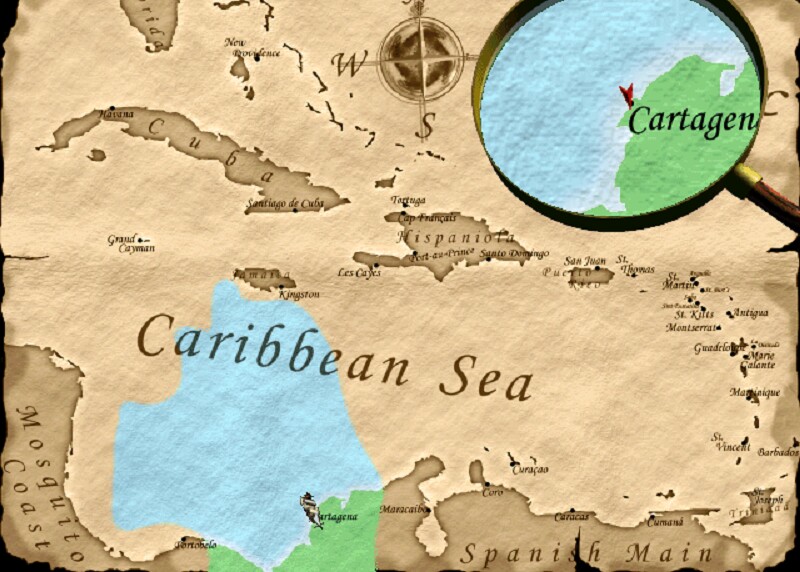