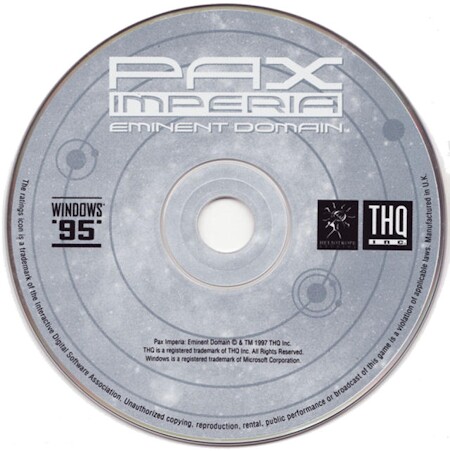 The Game
Traditional turn-based play is cast aside in Pax Imperia: Eminent Domain, a real-time galactic conquest game that quickens the pace at the cost of its depth and complexity. The main gameplay screens, easily accessible via the keyboard's function keys, reveal valuable data regarding research, foreign affairs, domestic policy, and military with clearly labeled displays and useful data. At other times you'll be examining the star map and planning your course of action. This map clearly distinguishes all star systems, color-coding those occupied by your forces as well as your enemies and allies. Meanwhile, the game sounds fantastic on all fronts. Even simple menu acknowledgments are kind on the ears, while the soundtrack is a stunning arrangement of synthesized mood tunes, which help keep you occupied for hours on end.

Clicking on a particular system's sun shows you the lowdown on all the planets in its orbit, at which point you can decide whether any are worth colonizing or not. Don't take too long staring at the sky, however. Soon enough your opponent will go moseying into your territory, looking to expand his own. At this point you can intercept with your spacecraft and thereby declare war, or attempt a more peaceful solution by pitching your new friend a treaty. You can set up a handful of symbolic neutrality pacts with your opponents and exchange trade routes and other information, but it's only a matter of time before he double-crosses you or you do the same. An exchange of refueling stations is but an invitation for the enemy to ferry in his armada to the heart of your empire to make a calculated suicide run against your homeworld.

The goal of Pax Imperia is the genocide of all who oppose you. Expanding your territory and exploring new sciences ultimately serve only to further this dark purpose. When you get right down to it, Pax Imperia is a race to colonize as fast as possible to grow more population to contribute to further research and construction of newer, deadlier technology.

The spaceship warfare in Pax Imperia is enjoyable and strategic enough to keep you interested for many hours on end. At first you'll be limited to your stock Destroyer-class warship, but given enough time your scientists will develop dozens of new toys for you to try so you can produce a custom warship to suit any number of destructive purposes. You'll step up to Cruisers in the midgame, which outclass Destroyers in most every respect, but by the endgame you'll muscle in with a combination of Battleships and Carriers, which make for an interesting combination of firepower and support defense. All ships can be outfitted with any number of weapons facing fore, aft, port, and starboard. Each ship also needs an engine and a warp drive, armor, shielding, missile countermeasures, and swivel-mounted point defenses. You can also outfit your craft with miscellaneous add-ons from repair drones to fighter squadrons. The computer does a good job of selecting the best combination of available components for a ship on its own, but it's more strategic (and certainly more enjoyable) to create specialized designs from scratch. You're restricted only by your scientific progress, your wealth, and the maximum capacity of the ship's chassis.

While you can readily defeat a low-level computer opponent merely by producing the largest quantity of the best ship you can afford, you'll need more finesse to deal with a capable foe. A successful fleet might consist of a pair of battleships devoted to antimissile point defense and long-range planetary bombardment with another pair armed to the teeth with forward-mounted lasers and missiles while several cruisers hover in back and soften the enemy with a combination of light and heavy fighters. Combat resolves quickly and brutally, with opposing forces advancing upon each other and blasting each other with everything they've got until one side is routed or destroyed. Most of the strategy therefore lies in the preparation for battle, though the payoff is certainly in a battle's successful execution as the screen lights up with beautifully animated sparks and explosions.

All in all, Pax Imperia: Eminent Domain is a competent game that is definitely above-average as far as 4X games go, particularly if you prefer to conquer galaxies by brute force rather than shrewd colony management. The real-time battles are fun, and the game is customizable enough to keep 4X fans busy. 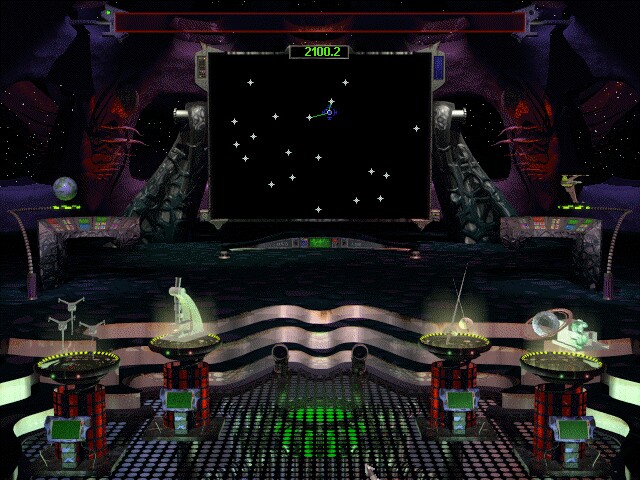 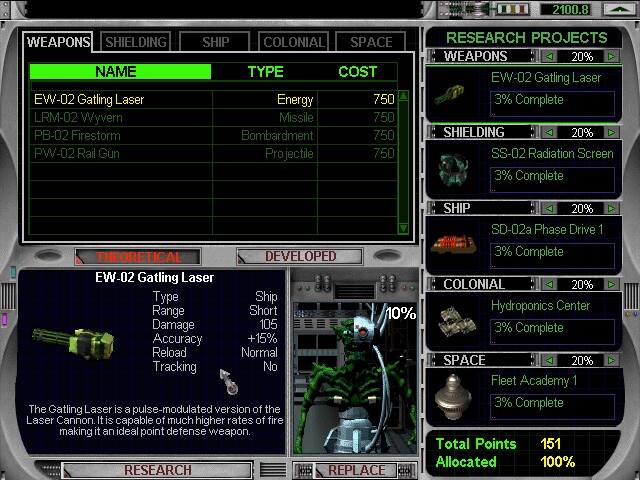