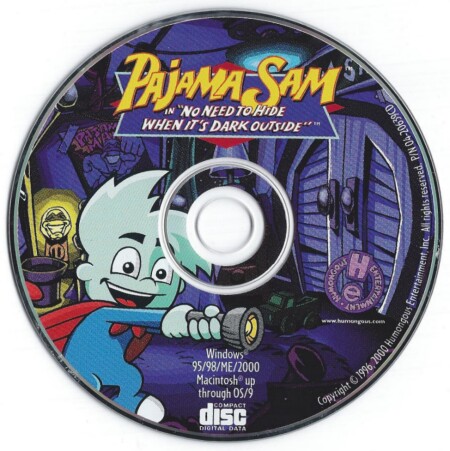 The Game
Sam is an average kid, if you look past his turquoise skin and hair. The opening cutscene shows him lying in bed reading his favourite comic book, the mighty Pajama Man. The story is cut short when Sam’s mum opens the door, reminding him that tonight there will be no lights left on like usual. She flicks the switch, and Sam instantly becomes a trembling mess. Determined to overcome his nerves, however, he decides to capture Darkness, the personified version of the dark, just like his fictional superhero does. To achieve this, Sam plans to disguise himself, sneak up on Darkness, then shine light onto him and suck him into containment. But first he’ll have to locate his foe in an unfamiliar world full of bizarre surprises and various obstacles. It’s a plot based on a fear that many children can identify with, and Sam becomes a positive role model in bravely standing up to it.

Before venturing to seek out his opponent, Sam needs to collect three key belongings from his messy room: a mask, Portable Bad Guy Containment Unit (a lunchbox) and torch. At this point, players are allowed to move the mouse around, clicking on objects for Sam to check if anything is hidden beneath them. This scene acts as a tutorial stage, introducing the simplistic controls of ‘one click does all’. When all of Sam’s superhero items have been found they are stored in the inventory, opened by hovering the cursor towards the bottom of the screen. It’s a very accessible, clean interface which works well and avoids any clunkiness or frustration.

Finally kitted up with his trusty trio, Pajama Sam marches into the cupboard, which transports him to the Land of Darkness, a place surrounded by trees and bushes against the backdrop of a starry night sky. Sports equipment and clothes (also found in Sam’s room) are dispersed within the vegetation, hinting at a link between Sam’s imagination and this strange new world. Following a cobbled path, Sam is soon stopped in his tracks by a group of anthropomorphized trees. They introduce themselves as custom checkers, and swiftly confiscate all of Sam’s belongings and scatter them throughout the land. It’s now Sam’s task to recover his stolen items so he can defeat Darkness once and for all.

The trees are just a sample of the unusual characters that will make an appearance. Sam is the only human (if you can call him that) in this world, an innocent and friendly young boy who is keen to assist others. Along the way he’ll encounter a toaster, a coat stand and a fridge, to name but a few of the everyday items that have come to life. The most memorable are Otto the boat and King the mine cart, both of whom you’ll help out with their troubles. They act as modes of transport, and thus you’ll spend more time connecting with them than anyone else. It’s a shame other minor characters don’t play a bigger role, because everyone has a unique personality (such as the carrot trying to rescue his friends from being used in a salad and the over-worked water well) and I’d have liked to interact more with this colorfully assorted cast.

A key element for any children’s adventure game is voice acting – if the performances aren’t engaging, it’s likely that interest will be lost quickly. Thankfully, every moment you spend with these characters is a delight thanks to the brilliant and varied voices. Ranging from Sam’s high and chirpy voice to Otto’s hesitant and slightly wary style to the quiz show door’s enthusiastic zeal, each actor injects a highly distinctive personality into their respective roles. The music complements this perfectly, with upbeat tunes keeping the mood light while mixing in the occasional chime to add an unearthly air. Music even takes part in the game itself, with furniture dancing in secret and kitchen appliances singing about their functions.

Visually, No Need to Hide When It’s Dark Outside wouldn’t look out of place as a cartoon on television, with a charming 2D art style where many things are slightly askew and out of proportion. The Land of Darkness is bathed in deep blues and purples, creating an air of mystery and wonder without feeling scary, contrasted beautifully against the fiery reds of the rocky mines. There’s a real sense of scale and discovery, with Darkness’ treehouse looming as the most prominent thing in view, its thick trunk and huts atop of branches only hinting at what’s inside. To its left is a mine going deep into the lava-filled underground, while the right path takes you on a river journey snaking through caves and jungle. The locations are all within close proximity, but these three distinguishable areas feel surprisingly vast, and kids will have an exciting time exploring them all.

Items that help Sam along can be found lying around and placed into inventory storage, which never grows very big. The game’s puzzles are carefully paced to ensure that players always have a clear goal and know exactly what the next task is, and it’ll be up to them to figure out the solution rather than the problem. Examples include having to find an oil can to remove some rust or proving to Otto the boat that wood can float. There’s no obscurity or frustration, just basic logic, and the challenges never seem too hard or too easy. Some puzzles extend beyond the inventory, with highlights such as partaking in a quiz show and selecting the correct magic formula from a spell book to allow you to sneak around certain places in Darkness’ house.

A hallmark of Humongous games are the varying paths when you begin a new game, and No Need to Hide When It's Dark Outside is no exception, rotating between different options for where Sam's items are hidden. You could find his torch in a mine, his lunchbox in a well and his mask on a carrot. Or you might not, instead venturing to a shed or a river to retrieve them. New characters will also make an appearance depending on which path is given. It's completely randomized, and this makes it all the more fun to play through again. Although some key puzzles remain the same each time, another hour of all-new content could probably be squeezed out to truly see everything on offer. Sadly, the system isn't as well integrated as it could have been. Even if a certain location doesn't have any relevance for advancing your particular plot path, it'll still be accessible. Some serve as a neat bonus anyway, such as a room full of instruments that will play songs for you, but others will just confuse as to their purpose (or lack thereof).

If you're looking for an adventure for your younger kids, you should get Pajama Sam in ‘No Need to Hide When It's Dark Outside’ without hesitation. Don’t let its age fool you, as this remains a rather timeless classic. The fantasy world Sam finds himself exploring is beautiful and full of funny characters in an adventure wrapped neatly with clever puzzles and multiple plot paths for repeat visits to the Land of Darkness. And when all is said and done, today's junior adventurers might just find out that Darkness isn’t as unfriendly as he first seems after all. 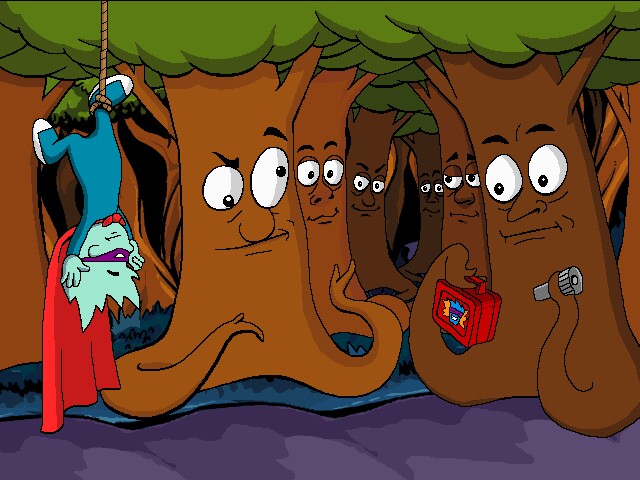 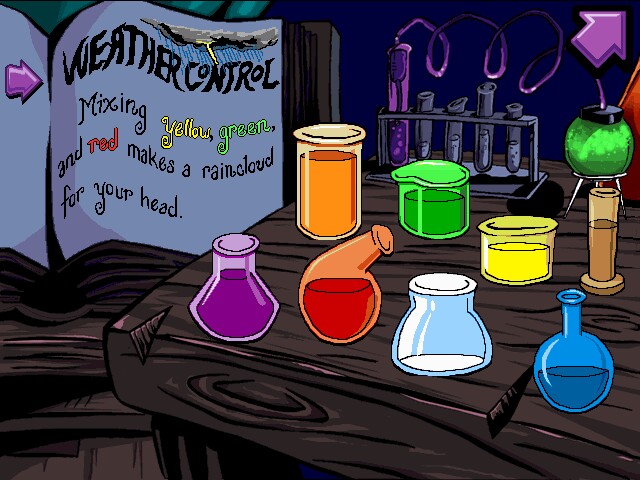