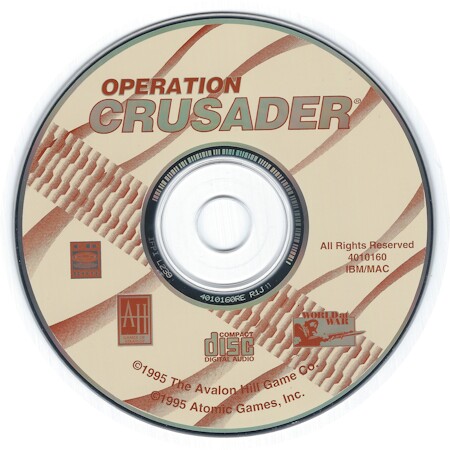 The Game
Operation Crusader covers the early stages (pre-Montgomery) of Rommel's Desert War against the Common- wealth forces in North Africa between November 1941 and December 1941. Five scenarios are included which progress chronologically and also in terms of difficulty. As well, a full campaign game is provided which, although the time constraints for this review have prevented me from exploring it in detail, can only be described as a grognard's delight: the entire map covers a huge portion of North Africa and with the Allies controlling a multinational force of 5 divisions and the Axis controlling 10 divisions (7 of which are Italian, and 3 German, including the formidable 21st Panzer Division).

Atomic's previous series, V for Victory yielded four exceptional titles published by Three-Sixty Games. Having switched publishers for WaW (Avalon Hill Games, arguably the most significant force in board wargaming), Atomic appears to be intent on delivering what the not-quite-perfect V4V series promised.

In fact, the transition from V4V to WaW is not so much revolutionary as it is evolutionary. Veterans of the V4V titles will be quite at home with OC, although a careful reading of the manual is strongly recommended. This shouldn't be much of an ordeal, however, since the OC manual is one of the best written and visually pleasing that I've come across.

For those not familiar with the V4V series, OC is an operational level wargame (the predominant combat units being battalions) which possesses a structure very similar to conventional board wargames. A hexagonal grid is superimposed on the map, with a scale of about 1 km per hex (it's not clear in the documentation) and all of the best elements of board wargaming are present, including: zones of control, unit stacking restrictions, combat resolution by odds comparison, hierarchical command structure, supply rules, etc. I've always felt that the Avalon HIll series are as much board wargaming simulations as they are WWII combat simulations: they look so good that you feel you can pick up the unit counters and move them around the mapboard with your hands!

Of course, OC and its V4V predecessors go well beyond the limitations of board wargaming. Combat fatigue, dispersion, night effects, replacements, troop quality, and other such dynamic factors are handled effortlessly by the computer; in a board wargame, keeping track of everything that happens in OC would be a nightmare! Combining complexity and playability is one of the areas where Atomic's wargames really shine.

As well, options allow for limited intelligence and the fog of war. If the former is chosen, the player will only have absolute information about his own units, with intelligence gathered about the enemy through proximity to the friendly units, probing attacks and air reconnaisance. If the fog of war option is chosen, then he will also have limited inteligence about his own units...with less information available about fatigued and out of supply units. Limited intelligence and fog of war are extremely well handled in OC, and I strongly recommend playing with both of these options on. Be forewarned, however, that enemy AI does not use these options, giving it a strong advantage.

Of course, one may argue from the V4V track record that the AI needs all the help it can get: enemy AI in the V4V games tended to be timid and not very imaginative. Take the AI in this game for granted and you may be in for a few rude shocks! Atomic deserves credit for significantly improving the AI in this game. In a number of instances, elements of the 21st Panzer division under the control of the computer aggressively tried to outflank my screen battalions to get at my HQ's and artillery concentrations. Very impressive. In other cases, I've been able to tie up the enemy through well executed diversionary attacks (OC includes dummy units on each side; deception was a significant element of the Desert War and under limited intelligence/fog of war these units can be very effective). You do get the impression that the AI is actually thinking a bit, and evaluating potential threats instead of just, well, sitting there!

As an amusing side note, in one scenario against the computer (Hellfire Pass with the computer as the Axis), I launched an aggressively mobile encirclement of Italian defensive positions protruding from Fort Capuzzo. When my New Zealanders (now north and west of Capuzzo) cut off their supply lines (presumably from Bardia to the north) while at the same time my British armour punched a hole in the Italian defences, the 'Italian AI' freaked out and almost the entire 55th Division left their fortifications and streamed out of the area by strategic movement, allowing itself to be ambushed en masse by my Indian regiments to the east!

Now that's what I call simulation! Thankfully, the game does not force me to have to deal with thousands of Italian POW's.

OC boasts an improved supply system; a hierarchical chain of supply now exists, going from individual unit through the various levels of HQ's to a supply depot and finally to an initial supply source. This structure is perfect for encouraging desert warfare-style strategies and tactics. A well fought scenario/campaign would have both sides engaging in sweeping mobile operations to outflank the other's supply lines, leading to devastating effects on the morale and effectiveness of the affected combat units.

Air support in OC has been improved over V4V in that the player can now assign individual squadrons to air support tasks such as movement interdiction and combat support. In addition to being a less abstract system than in V4V, there is a higher likelihood of requested air strikes occuring. Players must also wait for squadrons to be refitted before they can be reassigned to new tasks: nice touch. Conspicuous by its absence is the ability to use airpower to interdict enemy supply lines. Given the crucial role of supply in this theatre, it would have given the game an even richer atmosphere.

Another innovation present in OC is the ability of armoured units to perform overrun attacks. This gives the game a nice tactical dimension lacking in the other operational level V4V games. One omission, but perhaps the designers felt it was too tactical for the scope of this game, is that German heavy flak (88) cannot conduct limited ranged attacks on British armour. Historically, these units could engage British armour up to a range of 1.5 km (2 hexes) across the flat desert terrain.

One of the nicer improvements to the game system is the fact that the player can now choose colour coded shadings on units to distinguish such things as unit type, supply status, and fatigue. This shading can be adjusted in the main button bar. I find it particularly useful in making sure I haven't forgotten any stray artillery units hiding under other unit types (something I did a lot of in V4V!).

In conclusion, Operation Crusader offers an outstanding wargaming experience. It possesses the best aspects of the V4V games, while significantly improving on their weaknesses. It is an auspicious beginning for the new WaW series and sets the stage for future releases (expect Stalingrad to be the next WaW offering). Operation Crusader, while not perfect, is clearly at the cutting edge of computer wargaming. It offers a rich, complex environment while at the same time is organized to maximize playability and is robust enough to allow the player to experiment with tactics and strategy against (finally) an adequate AI opponent. 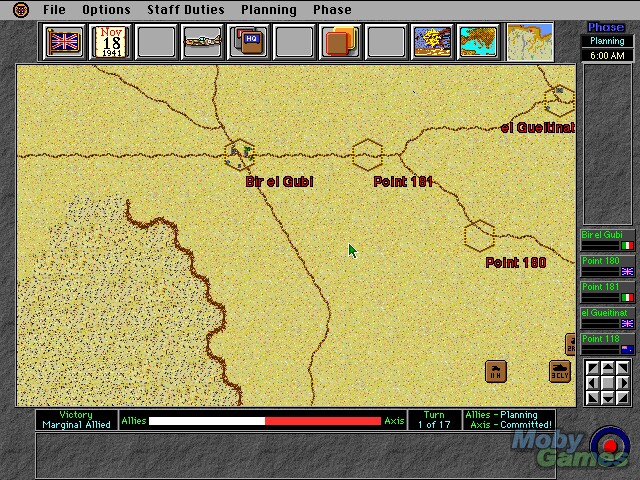 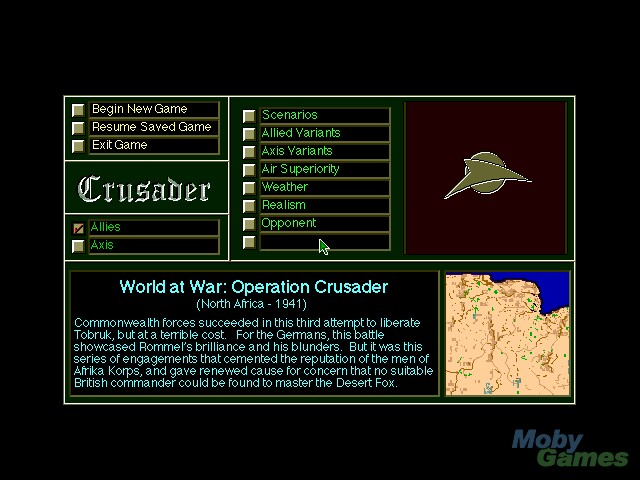