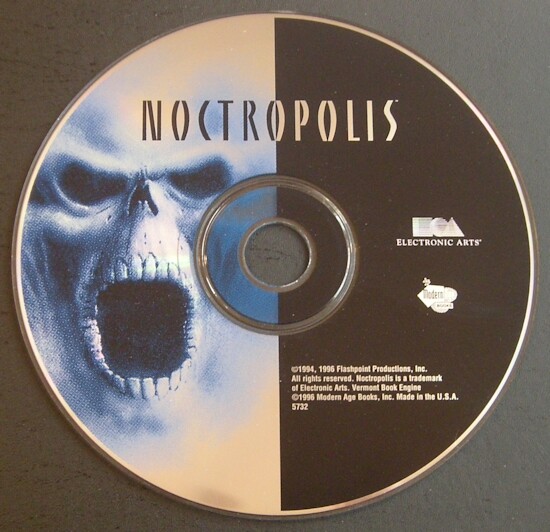 The Game
The comic-book Noctropolis is a city of the night - literally. About a hundred years ago, some kind of natural cataclysm caused the sky to be completely shrouded by an impenetrable cloud of smoke, ashes and dust. Since then the sun no longer rises in Noctropolis. And like other comic book cities, Noctropolis also has a big crime problem. Not just street gangs and thugs but super villains, incredibly evil and powerful.

And like other comic book cities, Noctropolis has a superhero. His name is Darksheer and he is a creature of the night, with the ability to become nearly invisible in darkness. He is also almost invincible. A person like that of course deserves to have a comic book series published about them. In this case it's "Darksheer, Crusades in the City of the Night" by Cygnus Comics.

Darksheer is so good, in fact, that there are not too many villains left. The issue of "Darksheer" included with the game deals with his elimination of the last three: Desperado, Widowmark and Top Hat. As we flip through the pages, we learn how Darksheer dispatched the first two. But Top Hat, the sinister trickster and magician, would have killed him if it weren't for the last-minute intervention of Stiletto. She is supposed to be Darksheer's partner and as her name suggests, she is very, very good with knives. The two heroes have a bit of falling out and Darksheer does the one thing that superheroes are not supposed to do: retire. The city throws him a huge farewell parade and Darksheer disappears, never to be seen again. Or...?

Meanwhile, in the "real" world we meet Peter Gray, owner of a not very profitable bookstore specializing in rare books (sounds a bit like Gabriel Knight doesn't it? Both games appeared at about the same time). His wife has left him, he is in debt and the outlook is not good. But he still has his comic books and especially his favorite, the "Darksheer" series. Except that, after reading the issue I just rehashed above, he learns that it is to be the last one. So he gets even more depressed, falls asleep and has a disturbing dream where Succubus - one of Darksheer's foes - attacks him.

Fortunately a doorbell rings and Peter wakes up. He has just gotten a package - he is the Cygnus Comics sweepstakes winner. One of the prizes is a brand new issue of "Darksheer" and Peter starts reading immediately. Something is dreadfully wrong in Noctropolis. A new master villain called Flux has appeared seemingly from nowhere and has started breaking Darksheer's old enemies out of prison. Dr. Macabre, the sadistic surgeon. Greenthumb, strange mutant who can bend plants to his will. Dreamer, a strangley deformed humanoid who attacks his victims through their dreams. And others.

After finishing this new issue of "Darksheer", Peter is naturally confused. Also included with the sweepstakes prizes he received are two odd coins, one silver and one gold. When he flips the silver coin, a strange monolith suddenly springs up in the middle of his bookstore. Besides ruining Peter's carpet, the monolith also opens up and sucks Peter in.

When Peter recovers, he finds himself in the middle of a strange city - "strange" as in both "odd" and "unknown". Actually, something about the city does look familiar. Yep, you guessed it - it's Noctropolis. Confused and lost, Peter decides to find Father Desmond, one of Darksheer's old allies. Unfortunately the Noctropolis cathedral is being guarded by a stone gargoyle which has mysteriously sprung to life, apparently at the bidding of the demon Succubus. But through an ingenious application of high voltage electric current, Peter dispatches the gargoyle and gains entrance to the cathedral.

When he tells Father Desmond that he, Peter Grey, is the new Darksheer, the good Father is naturally incredulous. But after a bit of convincing he agrees to give Peter the address of Stiletto. Unfortunately she has been nursing a bottle since Darksheer left her and is not in the least interested in anything Peter has to say. What a letdown! So Peter starts adventuring on his own. After a while he is attacked by the demon Succubus again, this time for real (if the comic book reality is "real" that is), but he is not killed - apparently Succubus wouldn't mind killing him but her new master Flux is against it because he has other plans for Peter. But Flux's plans say nothing about Father Desmond, so Succubus tries to take her revenge on the clergyman. Trying to be a good hero, Peter goes to help Father Desmond. The battle with Succubus is unexpectedly joined by Stiletto who apparently threw away the bottle, donned her tightly fitting black suit and pulled out her knives, as vicious as ever. And boy, does she look good!

The demon is banished (hmm, you're fighting a demon in a cathedral... what would you do?) but Peter passes out from exhaustion caused by his wounds. Stiletto carries him to Shadowlair, Darksheer's secret hideout. She submerges Peter in a pool of Liquidark, mysterious dark liquid (duh) with healing powers. Afterwards Peter just needs to pick up Darksheer's gear and ha can become a full-time superhero. Then he only has five or so super villains to kill and a final confrontation with Flux on his to-do list. He might even convince Stiletto to help him.

While the new Darksheer is busy doing hero stuff, we can examine how the game works. Noctropolis is a classical point and click adventure. The right mouse button pops up a stylish menu with a list of actions and access to inventory. Using inventory items works in a simplified way, if you "use" an item in the right room, Peter will generally do whatever is needed to use that particular object. Looking at the scenery will give you textual descriptions of it.

The puzzles are almost exclusively inventory-based, unless you count the dialogs as puzzles. They are usually not very difficult and most objects need to be used close to where they had been found. The biggest problem is finding those widdle things scattered here and there, usually dark against a dark background and only several square pixels large. Some of them are incredibly easy to miss. This is only alleviated by the fact that the game is often confined to relatively small areas consisting of just a few screens.

The story is very linear and most locations must be visited in a more or less fixed order - but that is always the problem (if it is considered a problem at all) if you want to have a tight story. The story is also not in the least credible but then again, this is supposed to be a comic book-style adventure. And I should also mention that for once, the "Mature" rating is spot on. There are a couple of violent scenes (though not too violent) and some "suggestive themes" (if that's what I think it means). After all, the box says that Noctropolis is an "adult graphic adventure", so there better be some.

If I were a professional writer, at this point I'd probably say something silly like "Noctropolis successfully captures the spirit of a comic book adventure and translates it to the digital game medium" but I'm not, so I won't. Still, I liked the game even though I'm not a comic book junkie. It has style, and that's not something you get out of a game just by throwing more money or technology at it. Nocropolis is a game with flair, solid execution and a wonderfully silly comic book-style story with an unexpected ending. 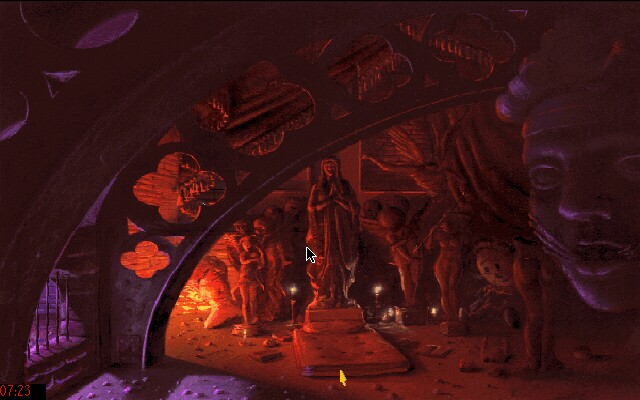 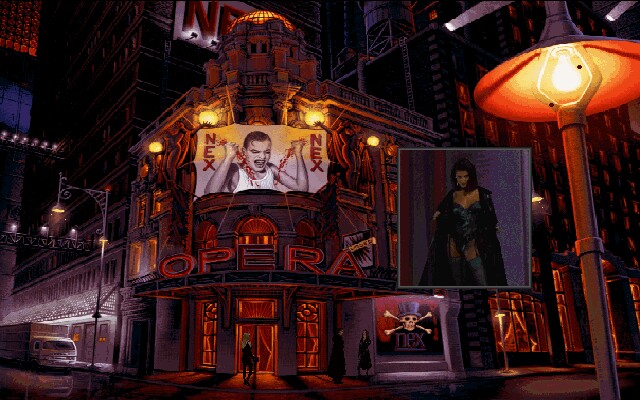