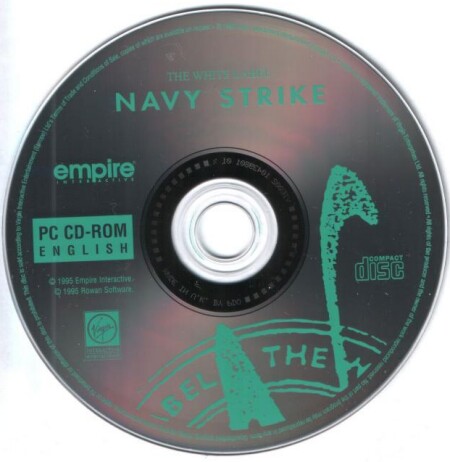 The Game
Navy Strike is an ambitious flight simulation from Rowan that tries to add elements of strategy in typical flight sim gameplay. The premise is quite interesting. In contrast to a real-world setting, Navy Strike places you in the role of Task Force Commander (TFC) and pilot in charge of one of three rapidly changing political situations: Libya, Kuwait and the China Sea. Each of the operation theater has its own fictional premise, none of which is too far-fetched. In Libya, your role as TFC Cis to uphold the UN's trade sanctions that have been imposed on Libya. For the Kuwait theater, your mission is to prevent a possible re-invasion by Iraq. Finally, in the China Sea theater, your mission is to oppose a no-fly zone that China has imposed over the oil-rich Spratly Islands. All of these missions start out as politically tense situations. War has not been declared, your main mission is to carry out orders without triggering a war. How you carry out your orders is up to you as the TFC. This adds an intriguing layer of complexity to the flight sim.

As TFC, you will control almost every aspect of flight assignment of your airforce. Your airforce, fortunately, has everything you need: you have under your control the F/A-18E, AX, and F22N, and E2C early warning aircraft. Using several predefined weapon loadouts and waypoint templates, you plot out your strategy. The waypoint template is a good system that eases novices into the game, and gives veterans a good starting point for modifications. Using a versatile in-game waypoint editor, you can add, delete, and modify waypoints, as well as determining the altitude of each aircraft and specific action orders for each waypoint.

The game's difficulty settings span the whole range from impossible-to-lose at the lowest level, to too-much-happening at the highest. The higher the difficulty, the more efficient resource allocation and prioritizing orders is required, since you don't have unlimited resources or time to get things done. As in most similar games, you will need to fly as many flight assignments as possible yourself for optimal outcome. The flight portion is similar to a typical flight sim, with crisp SVGA graphics.

Navy Strike melds a flight simulator with a command-level strategy game for one of the more unique flight titles of the 1990s. 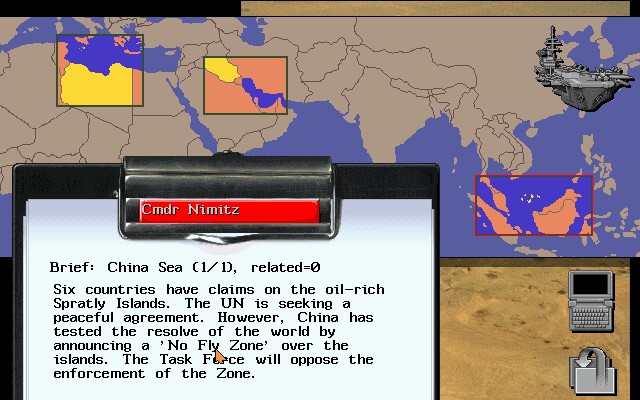 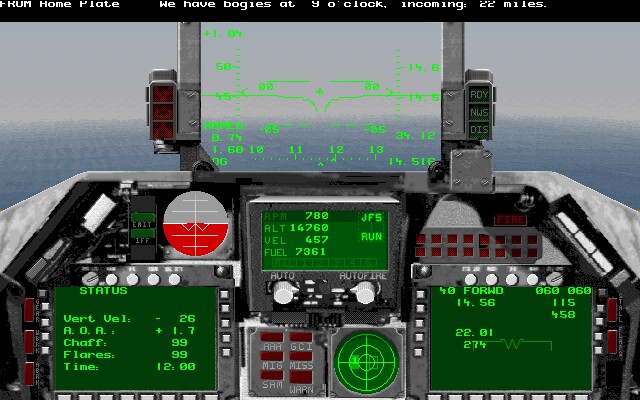