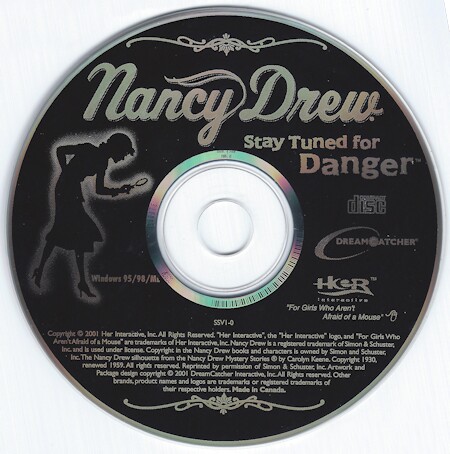 The Game
Nancy Drew - Stay Tuned for Danger was the second adventure game by Her Interactive after the successful book series. It is particularly meant for female teenagers starting from 11 years. In this 2D-adventure our young detective Nancy is directly called from the murder case in Florida to New York, to the production of a successful television soap opera.

Already for some time Rick, the male leading actor of the series, is molested with threatening letters, receives poisoned chocolates and other neat things. Rick however takes it easy and even doesn't talk with the police about it. But Mattie Jensen, the female leading actress and friend of aunt Eloise, and, as turns out later, also girl friend of Rick, takes it very seriously on the other side and calls Nancy for help. And Nancy is just coming right into the studio, when a heavy spotlight misses Rick only by an inch during the latest shooting. Only an accident?

During her investigations Nancy finds out fast, that the perpetrator must belong to the closer circle of the studio workers. She discovers the more or less hidden motives and collects clues. The nearer she comes to the solution, the more she herself runs into danger.

During the game the screen is divided into 3 main parts - the same as in the first game. The upper half shows the environment in 1st-person-view. Down right is the scrollable inventory and next to it on the left the space for dialogue texts. The button top left leads to the main menu, top right is the help button.

In the main menu you look at a pile of books from the back. Every book is a menu option. Additionally to the well-known options, like Save, Load and Settings, there is another very useful feature: the Second Chance! If you've made a fatal or lethal error - that's possible - you so can be brought to a point in the game just before it happens. "Stay Tuned for Danger" is played in 1st-person-perspective (ego-perspective) and controlled with the mouse. The cursor in shape of a magnifying glass changes its color to blue, if you get near the screen edge. If you then click with the left mouse button, the screen scrolls to the desired direction in steps. So one can make a 360-degree-turn nearly everywhere. If the cursor changes to a red color, a mouse-click can cause a movement in this direction or an enlargement of the shown objects. Also actions, like opening something or taking an object, may follow or you could start a conversation with a character.

The difficulty in the first game when clicking the dialogue lines is eliminated here. One selects objects from the inventory by clicking. In the upper screen area the cursor then takes the shape of this object and one can use it by a simple left-click. There are no technical or handling problems.

There are three main locations - the studio, aunt Eloise's apartment in Manhattan and the house of an actor's agent, that can be accessed through a city map. One can move here through corridors and other areas - if one has the suitable keys - and can open a lot of detailed views, in order to examine things. One should always take very close looks, because it really depends on little things, which can be sometimes very important.

Apart from the large number of coding/decoding puzzles, you have to listen to the dialogues, find and use objects at the correct place and the right time. Books, notes, video and audio cartridges must be examined. Since you can hardly remember all of the hints, you'll have to write down a lot.

This time there are timed puzzles too (e.g. a bomb must be defused) and besides still more brain twisters to solve. The degree of difficulty is higher than in "Secrets Can Kill". Again one gets help by some friends through the telephone - one can contact them at aunt Eloise. Some hints and tips are not absolutely necessary to finish the game and it is possible to solve the puzzles in different order. Sometimes there are dead ends, if you for example didn't take an urgently needed object from an area, which is locked later. Who played the first part, will surely have an advantage with "Stay Tuned for Danger", since the procedures are very similar to "Secrets Can Kill".

The game is not only for teenagers, but for all, who enjoy painstaking detective work. 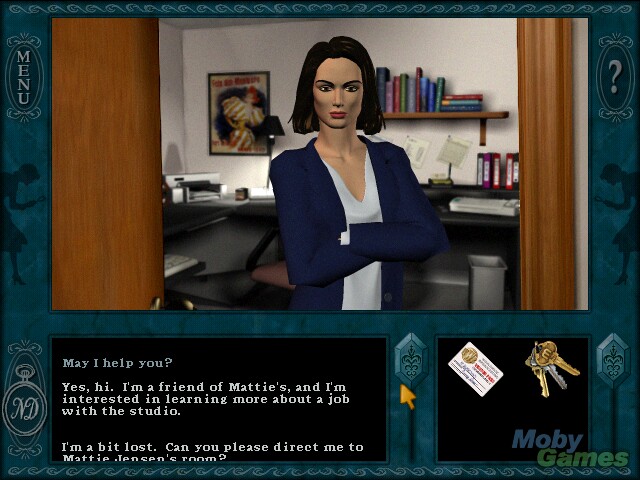 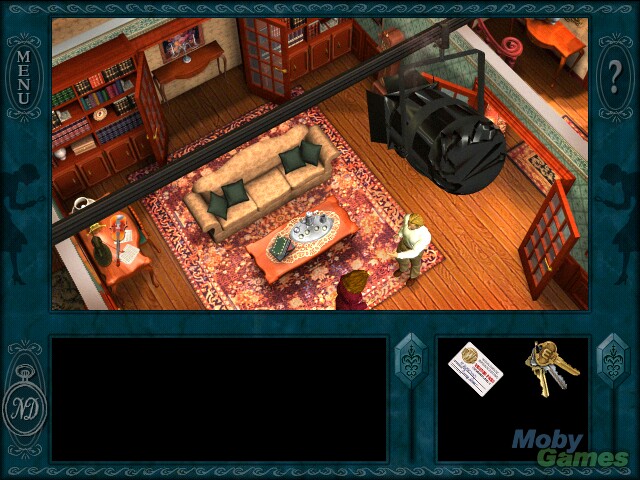