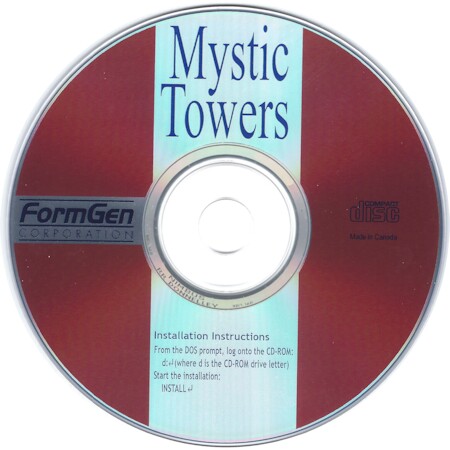 Actual Game
The Game
Sonic the Hedgehog has personality. While playing the game, if you just let him stand still, he starts tapping his foot and yawns. Aladdin starts juggling apples if you let him stand idle for long enough. Does "personality" create a hit game? Not nessecarily, but it certainly makes the game a little more fun.

In Mystic Towers, you play Baron Baldric, a not-so-perfect wizard. Sure, he shoots those lightning spells like you have never seen, and he is great at teleporting, but when it comes to his habits, he falls a little short of a model wizard. Imagine this. You are controlling Mr. Baldric, about to blast away a huge mutant ant, when he picks his nose! Or, he might start farting for no reason. Maybe, he will pick up a bottle to quench his thirst, rendering him impossible to control; he is drunk! When you talk about personality or character, Baron definitely has it. Let's take a look at the game.

The game starts with the residents of Rimm Village asking Baron Baldric to rid their towers of evil. Baron reluctantly accepts, winks at the screen, magically enters the tower, and begins his mission.

Mystic Towers consists of six towers, each containing five "levels." On each level of a tower, their are numerous monsters. The object of the game is to destory all the monsters in the tower, collect the red key, and exit the tower. To help you along the way, you may use various spells, including lightning, levitate, teleport, heal, and venom. However, this is not as easy as it sounds. Each tower contains a "monster generator." This generator continues to create more monsters as you defeat them. Therefore, the only way to complete a tower is to destroy its monster generator. All of the tower's levels can be easily traveled to, either by climbing up and down ladders, or by using a teleport spell. How is this for originality?

Because everyone has a different playing ability, Mystic Towers has two difficulty levels, as in other Apogee games. However, the game's difficulty levels contrast with other games, in that each difficulty level has a completely different map layout. So in reality, the six towers are actually twelve different games. This allows the game to have a lot of playability. The Apprentice difficulty focuses primarily on fighting, while the Wizard difficulty boasts fighting as well as puzzles. There are a few other differences as well. For instance, in the Apprentice maps, you start with a map of the tower, while the Wizard level requires you to find the maps.

The game's enemies are greatly varied. Each tower has all new monsters, each more strange than the last. If you are looking for "personality," here it is. The enemies range from giant, mutant spiders to evil women who lift up their skirts to fire lightning. There are strange, flying creatures that shoot fireballs out of their nose and weird jumping monsters that stick their tongue out at you. When it comes to enemies, this game has them all, complete with hundreds of frames of animation.

The music is very well done using a digitized eerie soundtrack that fits the game perfectly. As with all action games of the mid 90s, the controls will take some getting used to, primarily because of the isometric graphics. When you start to play the game, work at it until you understand the controls. The game format is pleasing once you learn to control Baron. 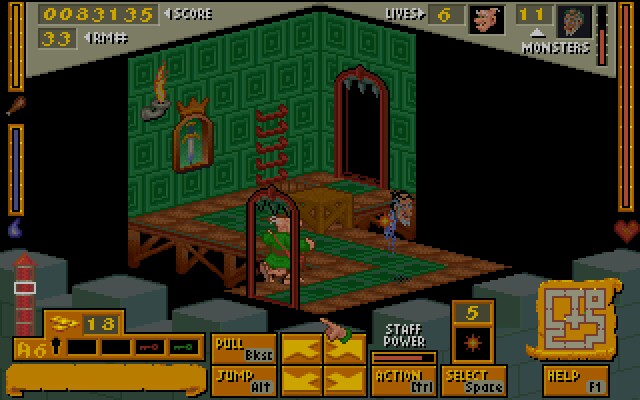 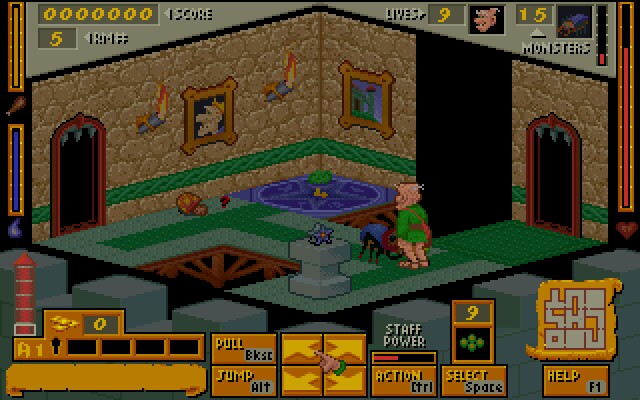