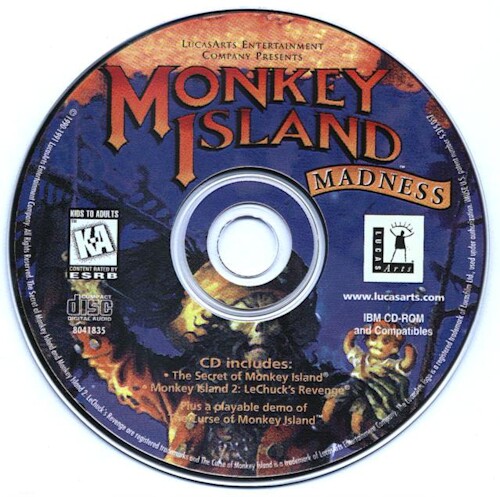 The Game
Monkey Island 1
When I first played The Secret of Monkey Island it was obvious the game was designed as much for fun as for nail-biting adventure. That it manages to provide a healthy amount of both is testament to the resounding success of its design. "We believe that you buy games to be entertained, not to be whacked over the head every time you make a mistake," reads the game manual. "We think you'd prefer to solve the game's mysteries by exploring and discovering, not by dying a thousand deaths."

They got that right. Blessed forgiveness is only one of several virtues that make The Secret of Monkey Island such a thoroughly delightful adventure game. It loses none of its edge in excitement or challenge by offering multiple chances at success, and in doing so it gains a friendly accessibility that keeps it from becoming frustrating and irritating the way other adventure games can sometimes be.

The game begins on Melee Island, where amiable goof Guybrush Threepwood has come to seek his fortune by becoming a pirate. The first stop is the Scumm Bar, where Threepwood endures the first of many cracks about his silly name and learns firsthand from three important-looking pirates what he must do to begin a life of robbing and pillaging. In very satistying detail, the adventure-game hero gets to dish out as many wisecracks as he takes. "You're a bunch of foul-smelling, grog-swilling pigs!" Threepwood can bark at his pirate mentors.

In your role as a pirate wannabe you've chosen the marauders of Melee Island to be your mentors. But there's one catch - none of these pirates is willing to sail the high seas, much less pillage or loot. They're all scared stiff of a stiff - the ghost-pirate LeChuck, whose spirited ship still rides the waves of the Caribbean. So the pirates swill grog in the local tavern while the treasures of the world go un-plundered, the armadas of the seas go un-molested, and the lasses of the country go un-kissed.

Find out about LeChuck by talking to the drunken pirates, then chat with the important-looking pirates in the back room to learn what tasks you must complete before the scalawags will take you under their wing. The three trials they assign - becoming a master swordsman, discovering the lost treasure of Melee Island, and stealing the Idol of Many Hands from the Governor's Mansion - must be completed before you can leave the island. But, no sooner do you fulfill your tasks, than you find that every pirate on the island has flown the coop. LeChuck is on the rampage again, and this time he's kidnapped lovely Elaine, the only governor who makes your heart beat faster. You must scramble to buy a ship, assemble a crew, and follow LeChuck to Monkey Island. Your goal on that isle is to find the key to the Monkey Head Temple. Somewhere in the caverns beneath the temple is LeChuck's ghost ship - and your one chance to stop LeChuck from marrying Elaine. Just how all this can be accomplished is what you must discover.

Designed by Ron Gilbert, who introduced players to the offbeat worlds of Maniac Mansion and Zak McKracken, Monkey Island keeps the outrageous sense of humor of those games, but is more accessible to players. Not only do events progress in a more logical sequence, but Gilbert has added the dialogue choices first found in Lucasfilm's Indiana Jones and the Last Crusade to the company's then-familiar point-and-click interface. The result is a faster-moving game with more action and less cursor-moving, an excellent example of the evolution of Lucasfilm Game's design ability.

Monkey Island also continues to reward those people who have played other Lucasfilm games by lacing the action with references to Loom and Indiana Jones (and, of course, Chuck, that perennial Lucasfilm character). It's truly a perfect family game of nonstop fun: All that's required is a knowledge of what to do when you're handed a rubber chicken with a pulley in the middle. The game is good fun and will have you laughing as you study to become a high-seas terror, so hoist the mainsail and post a lookout. For cutlass-swinging adventure, Monkey Island is somewhere on your horizon.

Monkey Island 2
Those who reveled in the funny, rollicking, politically correct and sometimes, self-deprecating satire of the first chapter will find that Revenge actually improves on the unique mood of the first. Even the soundtrack is better -- if you like the reggae score of the first you'll be very impressed by the second.

The insult humor that seemed so apropos to the first encounters of Guybrush Threepwood and seemed so glaringly absent in the denouement of the story on Monkey Island itself, is back three-fold. Not only is insult humor still the vital ingredient for effective swordsmanship, but there are three different insult sets to be encountered and assimilated on the three different islands Threepwood will explore during the game.

Talk about not living happily ever after. Guybrush has not only lost the love of his life Governor Marley, but has also outlived his fifteen minutes of fame. He tries to tell folks what a brave, courageous ghost killer he was, but everyone yawns and tries to interrupt him (and shut him up) whenever he does. Fortunately, he has a plan. Before one can get too serious, however, the game gently pokes fun at itself. The narration informs the player that Guybrush has switched to a more dramatic posture. Then, he tells his companions that he is after the treasure of "Big Whoop." Unfortunately, the next plot development discovered by the player is that the treasure is not only on another island than Scabb Island (where he currently resides), but that a penultimate bad guy named Largo forbids anyone from sailing away from the island.

The basic thrust of the game is getting to the treasure of Big Whoop. To do so, Guybrush has to assemble four pieces of a map and this, in turn, requires peregrinations to three different islands. Each island, of course, has its unique geography which is accessed via the sky-cam view used in the original Secret of Monkey Island.

By the time Guybrush travels to even a few locations on the island, from the Swamp Rot Inn to the International House of Voodoo, gamers will appreciate the new scanned graphics techniques and the way they add marvelous texture and depth to the backgrounds. It also will not take long for even the casual player to discover that the latest adventure features a host of improvements. The scaling capability, cutting edge in 1991, works along with rotoscoped animation to make character movement seem more life-like. Add larger characters onscreen and vertical scrolling to this capability and one gets some very cinematic viewpoints. For example, Guybrush has to dive off Captain Kate's tugboat in order to recover an artifact. The vertical scrolling allows Guybrush to sink through about six or seven screens of ever-deepening fathoms of ocean. It is a very effective scene and shows how the series evolves technically.

Naturally, the addition of light sourcing (so that torches, lanterns, campfires etc. flicker and cast realistic shadows) enables the interior scenes and nocturnal exterior scenes to project the right ambience. Another improvement in the sequel is the addition of an icon-based inventory to allow simplified handling of items, tools and artifacts. Ron Gilbert, original designer of the SCUMM system (Script Creation Utility for Maniac Mansion) that drives the Lucasfilm graphic adventure interface, and the programming team that keeps the system improving (Aric Wilmunder, Brad Taylor and Vince Lee) provided a much more stimulating and smoothly functioning environment for gamers to explore than those of its predecessors.

Fans of the original game were happy to know that some of their favorite characters from the earlier game returned to the sequel; the men of low moral fiber are found on Scabb Island (their circus debut did not go so well); the Voodoo Lady has her business on the first island; Stan (who has opened a new and completely different, previously owned business) and, of course, former Governor Marley is to be found in a mansion on Booty Island (adding to the non-romantic aspects of the game, Guybrush will have to grovel, grovel, grovel in order to get something very important from his "Ex").

Also, the in-jokes on Lucas Arts and the employees at Lucasfilm are still present. When one enters the costume shop on Booty Island, for instance, one not only finds the costumes for Sam and Max, but can get a commercial for the rare Steve Purcell comic book, as well. The islands in the game are still trademarked in a spoof of Lucas Arts early tendency to trademark even such familiar historical figures as Nazis in Raiders of the Lost Ark and artifacts such as Ark of the Covenant. There is also a nifty chuckle when former Governor Marley's guard scares Guybrush when dressed in a LeChuck costume.

The dialogue choices are just as hilarious as they were in the earlier game and it seems like more conversations are available. Conversations such as the one with the men of low moral fiber even offer running gags ("But what does this have to do with performance?") and Guybrush keeps finding out that no one believes that he killed LeChuck.

Another feature of the original game that is still present is the genre spoof. When Guybrush takes a shovel to the graveyard, for example, the program drops immediately into a self-running skit where the weather changes and lightning begins to flash. This is also one of the times when Gilbert has elected to use the cut scenes that make the pacing in the sequel even more entertaining.

Of course, The Secret of Monkey Island 2: LeChuck's Revenge offers some of the puzzles which are typical to the genre. Some of the puzzle solutions are kind of grotesque, however. For instance, Guybrush tries new uses for a coffin and sees if they will float; discovers that alligators are man's best friend; develops a rat-infested recipe for vichyssoise and, appropriately enough for a graphic adventure based on the SCUMM system and using a piece of code known as "sputum," wins a "spit decision" on one of the islands. Indeed, there are numerous bilious jokes about spit in the game.

The real treasure in The Secret of Monkey Island 2: LeChuck's Revenge is not to be found on Scabb, Phatt or Booty Island. It is to be found in beautifully painted backgrounds, charming animated characters, witty dialogue and a continuously evolving interface that became more transparent with each generation. When Gilbert and company design a humorous and challenging adventure game, they mean more than monkey business. LeChuck's Revenge is a classic. 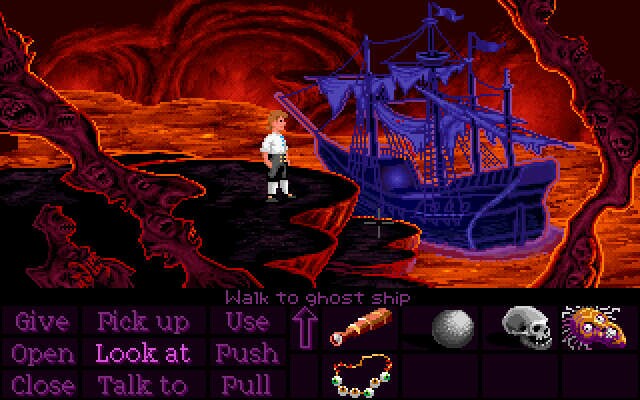 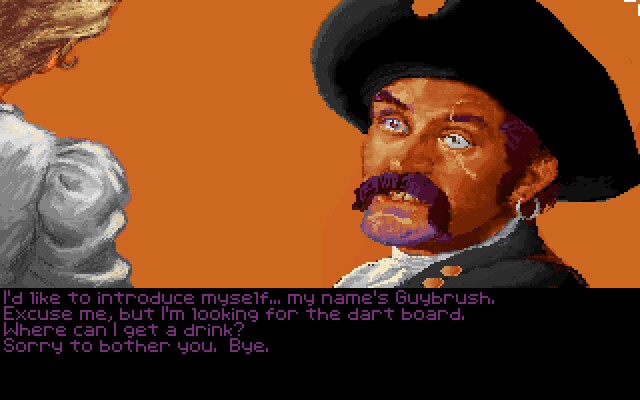