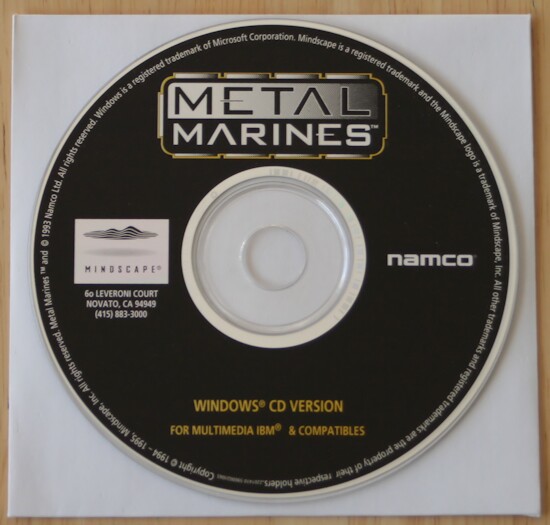 The Game
Metal Marines is a unique Real Time Strategy wargame that is a fun and challenging game once you get used to the frantic pace of gameplay. This Windows game has a lot going for it -- nice looking anime, good graphics and voices, a unique interface, and a good challenge at the higher levels.

The plot is mostly used to set the game up, rather then being developed as the game wears on, but its a frightening one -- in the 23rd century, antimatter technology is developed, and Earth benefits from cheap and easily made energy, in orbiting space stations and colonies. It's also known that antimatter could be used as a powerful weapon, and terrorists try for years to steal some. They finally succeed, and Earth erupts into a horrible antimatter war, with all the major cities destroyed and large areas of the ground blasted into nothing, leaving the planet with many islands. Finally, the remaining leaders band together into a United Earth Empire and try to rebuild the shattered planet. Seeing a chance to take control, the united space stations and colonies invade Earth. You are in command of the United Earth Empire forces as they resist the invaders and the tyrannical leadership that they stand for.

From the main menu, you can customize your base for the next mission -- the game keeps track of which mission you are on by your name. When you first enter your name, you do a tutorial mission and then the real fun starts. There are nice anime scenes thrown in the game from place to place and several voices that enhance the game experience.

The interface is unique for its time. There are four separate windows that the game plays on -- one for your island, one for the enemy island, one for your base buildings, and the last for communications and status messages. You can resize the windows as you wish, but there's no 'blank' screen in the background -- that is, you can still see your Windows desktop as you play! This can be confusing, but you get used to it after you resize the windows to your preference. The graphics are cute cartoon-like representations of people, the islands, your units, and the buildings.

The objective in each mission is to destroy everything in your enemy's base while making sure the same doesn't happen to yours. You have a few headquarters and as long as one is left alive at the end, you win. You already have some units and buildings when you start, as well as some money to build more. You also need energy to operate your base. Buildings you can build include energy plants for energy, war factories to speed up construction of units, plants to obtain more money, anti-missile defenses, turrets to ward off ground troops, and 'fake' headquarters to fool the enemy. Attack units include missile launchers, metal marines to attack buildings once you have spotted them, and ICBM's that are much more powerful then normal missiles.

When the game starts, you don't know anything about the enemy's island. To start destroying his base, you send over missiles to where you think buildings are. Anti-missiles may intercept them. If they hit close to a building, it shows up on your map. Now you can hit them again with more missiles, or send over your metal marines (three can be sent over at once, as opposed to one missile attack at a time) to attack them on ground. Of course, the enemy is trying to do the same to you -- counter his attacks with anti-missiles, radar, turrets, and decoy bases. What makes the game frantic to play for the first half of the mission, though, and a little hard to get used to, is the rapid pace of the attacks. Only one attack can be happening at any time, so often you have to ward off the enemy's attacks before you can finally get some in on your own. Destroyed units and land on your side can be bulldozed to make way for new units, and your metal marines come back from their attacks after a short time. 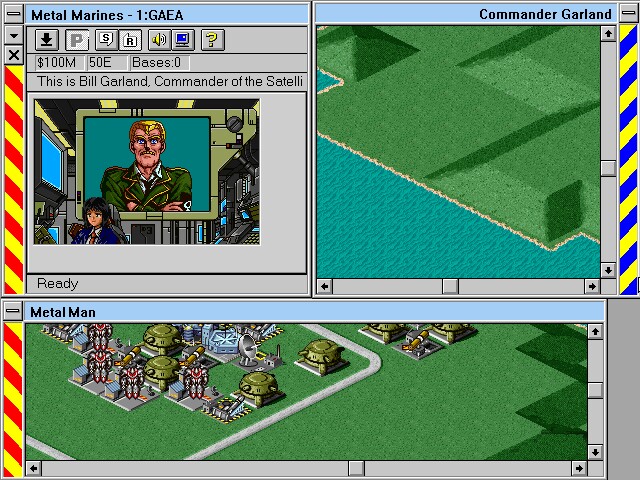 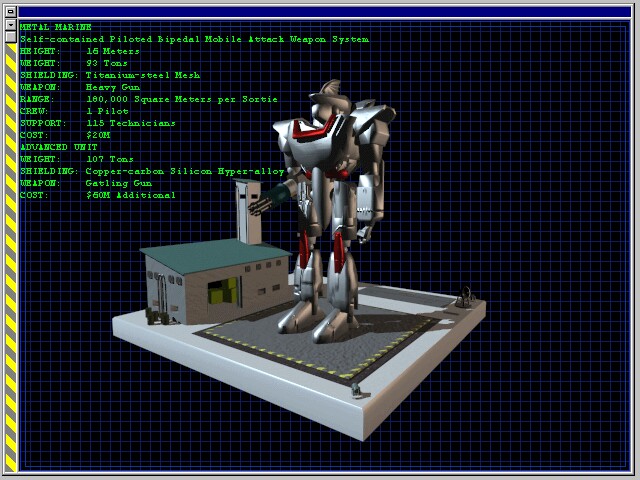